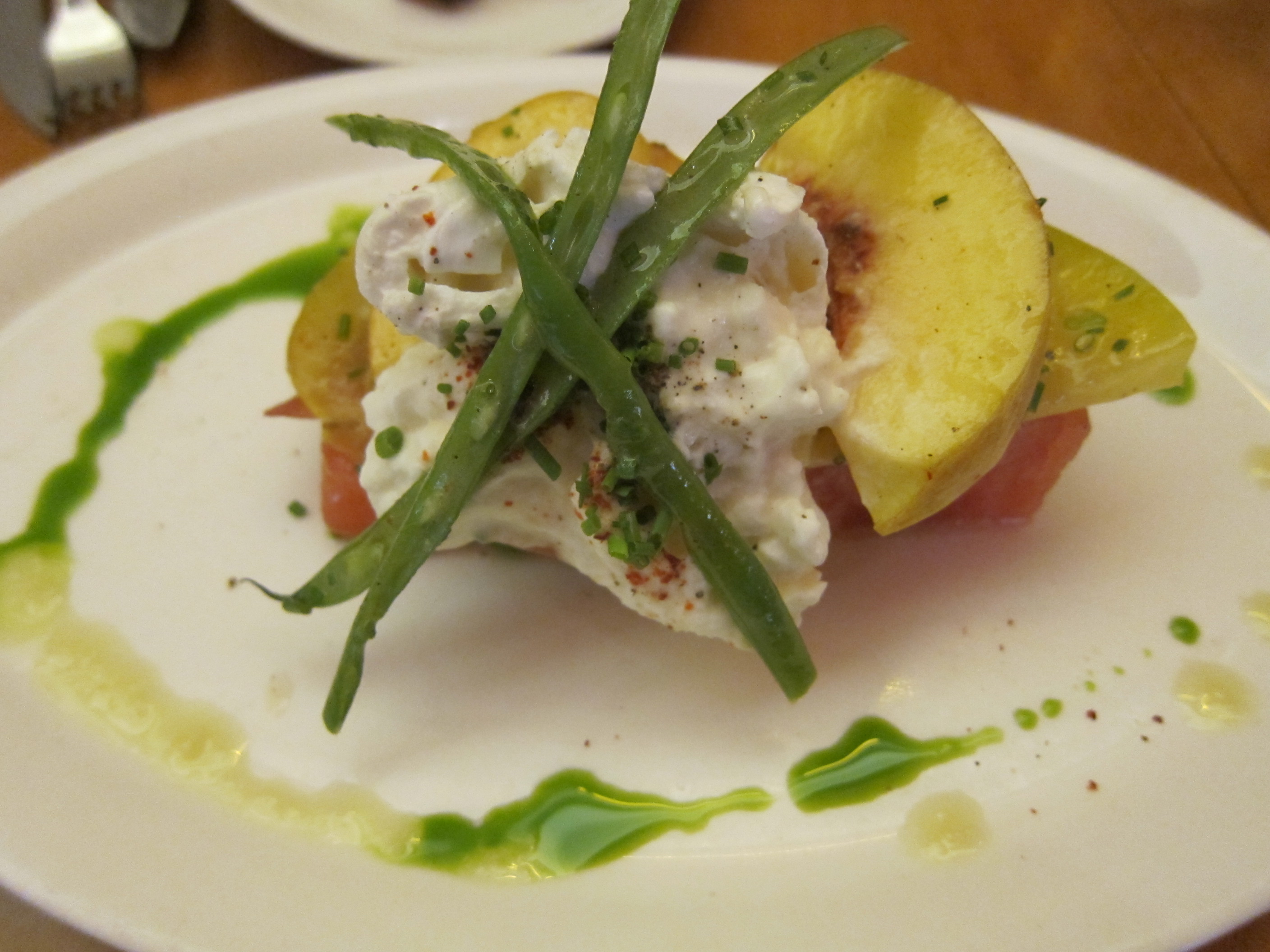 Creative, beautiful, delicious. These are all words I would use to describe David Burke’s cooking in general, but more specifically, it describes my brunch at David Burke Kitchen on Saturday. Following some unnecessary (but enjoyable) spending at the Bloomingdale’s friends and family sale with my friend Alex, we had a totally necessary and delicious brunch.

The space at David Burke Kitchen is adorned with photos of food purveyors and farmers, which leads into the concept of the restaurant, which is locally sourced, wholesome food. Case in point: the complimentary bread and fruit basket that arrives at your table with cheddar biscuits, carrots, grapes, breadsticks, creamy salted butter, and two types of jam (JAM!) – raspberry and orange marmalade. The orange marmalade had beautiful strings of orange zest running through it, and it was very perfumey, but delicious on top of the buttery, flaky biscuits.

This next part may come as a shock to some of you, but I had something here with bacon…and I didn’t like it. Audible gasp, I know, but I have discovered that bacon doesn’t necessarily make everything better. We tried the Bacon Bloody Mary, made with bourbon, tomato juice, and a gigantic chunk of bacon skewered on top. In true David Burke fashion, it was a sight to see. It was probably the most carniverous, barbaric looking drink for two girls like us to be sipping. You bring it up to your mouth and you’re hit with the smoky bacon scent and you think “awesome!” but when you taste it, it just tastes like smoke and bourbon. I think it overpowered the tomato juice and everything else that a Bloody Mary is supposed to be.

The brunch menu at DB Kitchen was overwhelming (at least for people like us), because we wanted almost everything. What a dilemma. So we decided on a little bit of this and a little bit of that…and ended up loving every bite. We started out with the Salmon Pastrami jar (that wasn’t in a jar, which was mildly disappointing) with mustard and olive oil wrapped around breadsticks, the bison tartare with smoked tomato sauce, egg salad and chives, and the prosciutto, burrata and watermelon salad with shaved string beans.

The bison tartare was my favorite, followed closely by the prosciutto-burrata salad. The bison was tender, salty and complex with the creamy egg salad, but the combination of watermelon, prosciutto, heirloom tomatoes and burrata was cool and refreshing. We picked some great contrasts for sure, and the salmon “pastrami” was spicy from the mustard, and salty from the curing process. Everything tasted like it came right off of someone’s farm, it was so fresh.

To be perfectly honest, I could have filled up on the starters, but we decided to split a salad because…it’s brunch damn it! We got the Market Salad, with bacon (more bacon!), goat cheese, pears, walnuts, shrimp, chicken, and maple-mustard vinaigrette. One word: DELISH. I rarely order salads out because they’re usually so one-dimensional and boring, but I think if you’re a truly great chef, you can make even a salad something unexpected and delicious.

This salad had everything: savory and succulent shrimp, tender pieces of white meat chicken, sweet and crunchy walnuts, thin slices of pears, tiny chunks of cubed potatoes, bacon lardons, pats of creamy goat cheese, and the waiter comes over and snips fresh herbs over the salad with a pair of diesel scissors worthy of Edward Scissorhands. Again, so fresh, so fragrant, and the only part I didn’t like was the pears. Simply because I don’t like pears – I think they have a weird grainy texture and it bothers my teeth. Shut up.

We were too full for dessert, but I believe I have mentioned the David Burke Monkey Bread in a previous post, which is like sweet, caramel-y heaven in a tin fit for two. Gooey bread is baked with bananas, pecans, caramel and served with fresh whipped cream and two scoops of vanilla ice cream. If you have room for it, do it. DO. IT.