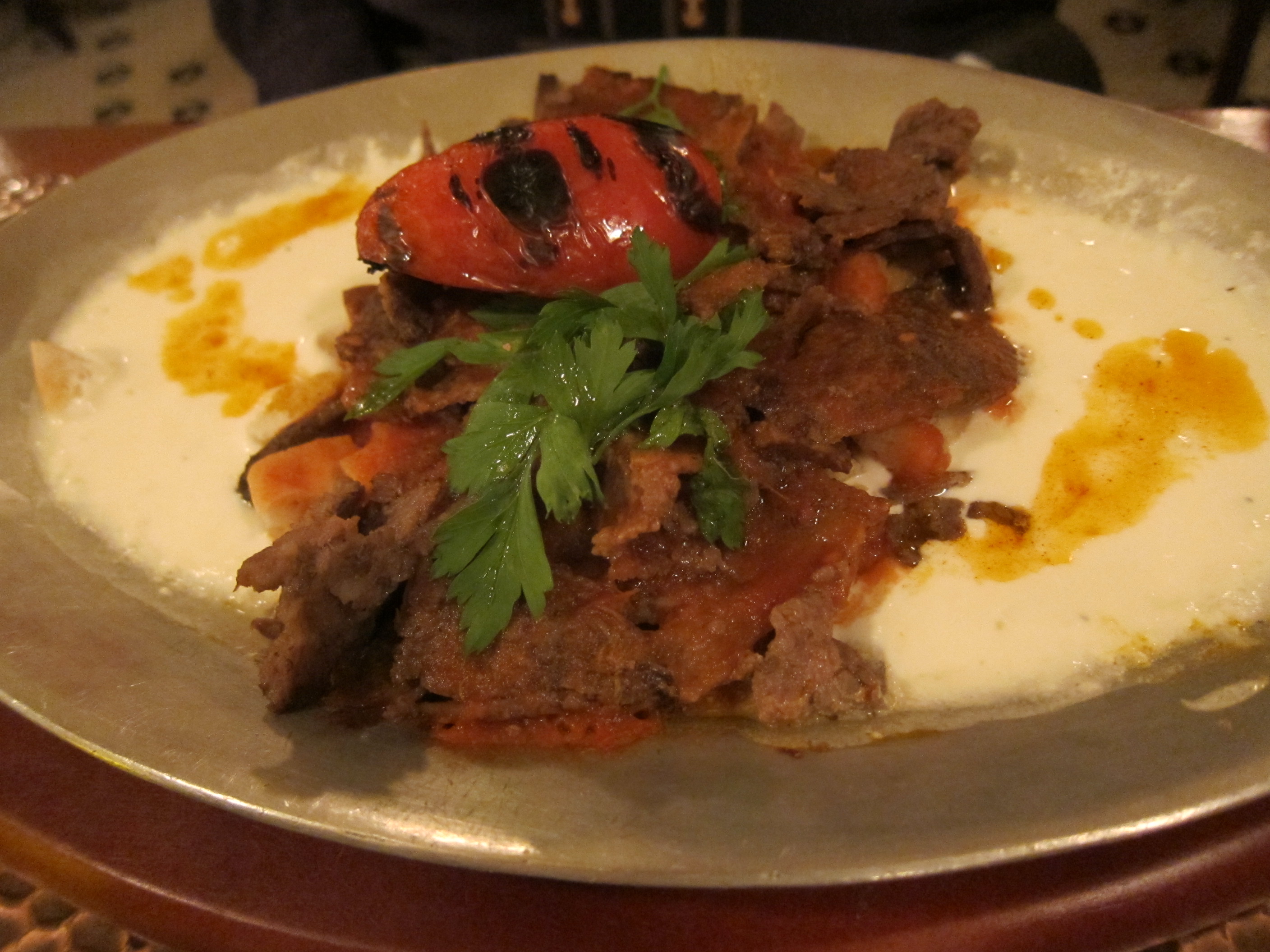 Turkish food is so underrated. There’s a ton of places to get Turkish food in this city, yet no one ever says “hey, I feel like Turkish tonight.” Well no one except for my Dad. He texted me the other day with those exact words, so I said, “you know what? I do too.” And off we went to Taksim in Midtown East.

Turkish food is like most Mediterranean food in that it’s very flavorful, heavily spiced, and loaded with vegetables and olive oil. Aka yum. We started out with appetizers, or “meze”, which included hummus (of course), lentil balls and ezme. They serve the meze to you with warm bread sprinkled with black and white sesame seeds.

Ezme is finely chopped tomatoes, cucumbers, parsley, roasted green and red peppers, onions, olive oil and pomegranate juice. I know, the pomegranate juice throws you for a loop, but you don’t taste it really. The mixture is just spicy enough from the peppers and onions, and the little bit of sweetness comes from the pom juice and tomatoes. Neither of us had tried it before, but we both agreed it was definitely “a repeat” as my Dad likes to say. He also liked to call this “enzyme”. Oh, foreigners.

The lentil balls were interesting…mashed lentils mixed with scallions and parsley. Sounds like falafel right? Wrong. The mixture is cold, and it’s not baked or fried. It’s literally just mashed lentils mixed with the scallions and parsley, and hand-rolled into shape. I mean I could see the finger outlines in the dumpling-style lentil balls. They were good, but the texture was a little dry so I’m not sure if I would be dying to have them again.

talk about made by HAND

And now….we eat lamb. I love lamb. I’m Greek I kind of have to. My Dad isn’t Greek but he is of Eastern European descent as well (Romanian-Jew), so he enjoys a good lamb. He got the Lamb Iskender, which was awesome; thin-sliced pieces of grilled lamb served over potatoes and a creamy tomato-yogurt-garlic sauce. I got the Lamb Adana which was a LONG piece of ground and chopped lamb mixed with peppers some delicious spices like paprika, served with rice, roasted peppers and a small house salad. It was so tender and flavorful, the bites literally melted in my mouth like butter, and it had a bit of kick from the peppers and paprika. It was perfect. But if you need to cool it down at all, they give you a small side of yogurt sauce for dipping. I salivated just now.

If you like smoky grilled vegetables, garlic and savory lamb…you seriously need to try Turkish food. Get on it.