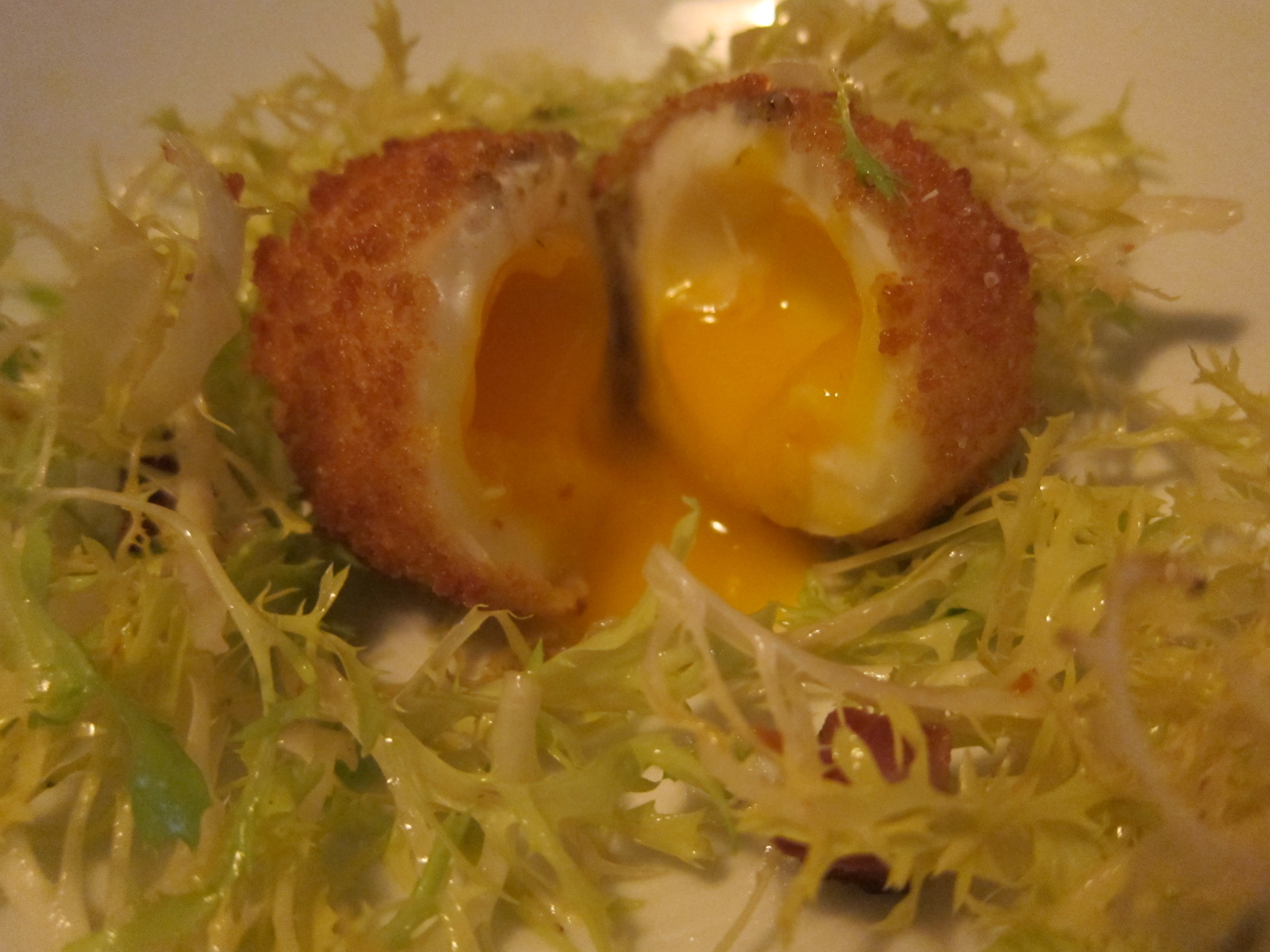 Wedged in between the likes of basmati rice and raita in Curry Hill sits The Three Hens, a non-Indian, contemporary restaurant featuring American comfort food with fun and exotic twists. I have to say that I enjoyed some of these twists, while others just left me a little perplexed or indifferent. One that left me perplexed in a good way was, believe it or not, the bread basket and honey butter with hay ash. Yea…about that…

So hay ash is apparently exactly what it sounds like. Hay, burned then ground into a smoky ash, and in this case, dusted on top of some sweet honey butter. The purpose? Aside from that cool carbon color, it is believed to pull out the sweetness from the honey butter with a smoky finish. I didn’t really get a lot of smoke, but either way I could have eaten that stuff with the fresh warm bread all day.

Chef Colin Kruzic, formerly of Jo’s and Abe and Arthurs, certainly knows what he’s doing when it comes to the Crispy 5-minute Egg.  An encrusted, soft-cooked egg sits atop a frisee salad with bacon lardons and bacon vinaigrette, mimicking an egg laying on a nest. Ok this might be a strange comparison, but when you cut into it and take a bite with a little bit of everything, it actually tastes like a McDonald’s chicken nugget. Don’t say ew. It was delicious. Probably not the exotic twist Chef Kruzic was going for, but I was very ok with it.

I rarely meet a mac and cheese that I don’t like…and I’m happy to report that this pattern continues at The Three Hens. Penne pasta is smothered in gruyere, cheddar, and fontina, topped with a buttery breadcrumb mixture and baked in a cast iron skillet. The top looked like it would be hard, but when you drove your fork down into it, fortunately the inside was melty, buttery and cheesy. Mmmmm..the fontina and cheddar give it a nice sharp bite.

The appetizers and drinks were the highlights of my dinner at The Three Hens, and we fell hard for the shrimp boil with a nice Prohibition Tea to wash it down. The seared shrimp had a slightly smokey bbq taste, and it’s served with sliced corn right off the cob, and pan fried potatoes. This one had a very homemade feel to it, with the potatoes being perfectly imperfect in size and shape, but so light and crispy. The Prohibition Tea is a concoction from mixologist Zak Snyder, and it is S.T.R.O.N.G. Tequila, bitters, tea, cinnamon stick rolled in cane sugar. This is what I remember from that drink. I know there is more involved, but either way it smelled and tasted like Fall in a glass. Or maybe it was fall on your ass…I’m not sure.

Now for the bad news. The mussels in spicy beef broth, which sounded so good on paper, fell short of my high expectations. The broth was lacking any sort of spice, while some of the mussels were fishy. It’s served with thick, grilled and buttered bread, which would have been great for dipping, had the sauce been a bit more flavorful.

The classic cheeseburger and fries were a better decision, but I could have done without the pretzel bun. The burger is quite large to begin with, considering it’s stacked high with lettuce, tomato, house-made cucumbers and a tasty special sauce that’s flavored with mayo, sriracha and lime juice (among other things I hear)…so I thought the pretzel bun was a little large and made it hard to eat. The fries were awesome though – they had to be removed from my presence to avoid a “scene”; that scene being me inhaling fries from the plate without the use of my hands.

On another sad note, the desserts were a bit of a rollercoaster as well. The butterscotch pudding (like the mussels) sounded and looked really good, but it had that unfortunate layer of pudding skin on top, which made me think it might have been sitting around for a while. Maybe there are folk out there who enjoy a good pudding skin, but not me. The taste was also kind of bland and chalky. In terms of texture I’d have to give the gold star to the shortbread cookies. The texture was perfect, nice and buttery, but some of the flavor combinations were too out there, even for me. There was one with orange zest that was awesome, but then there was one with peppercorns and I just couldn’t grasp it. I bit into a big piece of peppercorn and I’m not positive but I think it went up into my brain. I’m all for exploring untapped areas of the palate, but this was like being electrocuted in the nose with a peppergrinder. Dislike.

The peppercorn one lurks in front..

The Three Hens gets three A’s for attentiveness, ambiance and adventure, but unfortunately they get an F for fishy mussels. The concept is good, but some dishes need to be fixed or completely revamped, or people might be strolling across the street for some tried and true tikka masala instead.