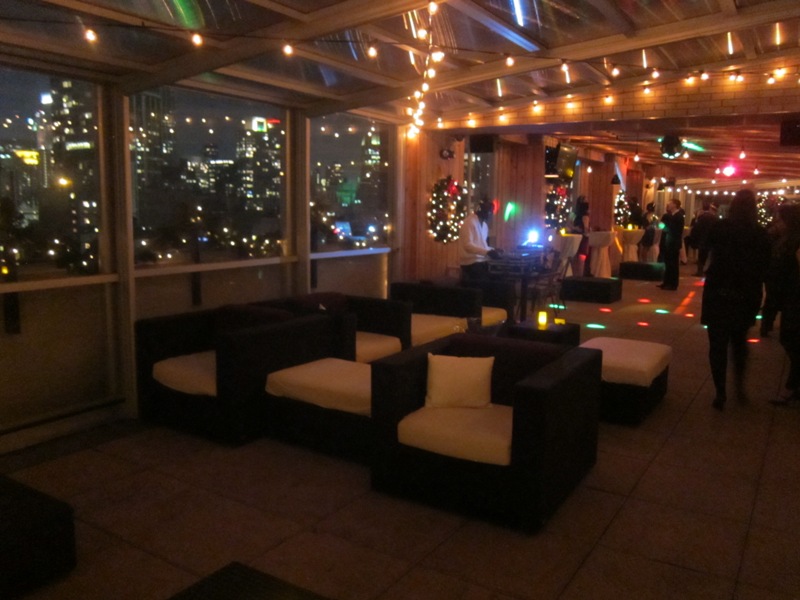 Nausea. Sweating. Anxiety. All things you would expect to experience the day AFTER New Year’s Eve, but planning New Year’s Eve in New York City can be just as painful as the aftermath. For whatever reason, NYE (as it has so adorably been dubbed) is most commonly associated with hype, excessive cover charges, and uncomfortable conditions which all generally lead to a slow and steady descent into regret and frustration…

“Why did we spend so much and not even enjoy ourselves?”

Because the truth is, we LONG for that one night where everything. just. works. out. I was fortunate enough to have such an experience this NYE. GASP. Me?! Of all people?! Negativity exudes from my aura! I’m so bitter if you squeezed my arm lemon juice might squirt out! Well, while all that is damn true, I know a good time when I see one – I helped organize a fun and food-filled night at Rare View, the rooftop bar/lounge in Chelsea, and no one was disappointed. I will caveat that because I am a writer/blogger, I was able to get us two complimentary tables, but the standard $95 pricetag got us open bar from 9 pm – 1 am, passed hors d’ouevres, party favors and a champagne toast at midnight (which is what everyone else gets too for the same price – just the tables are extra). Thus, all 26 of us entered 2012 the right way: drunk, full and happy.

The space at Rare View can hold groups large and small, but we had a large group (read above – yes, 26 people), so I have to admit I was worried at first. I was taken up to the roof and shown the area that was reserved for us. Moment of truth. It was spacious, comfortable and modern; the fluffy white and black banquettes were accented with Christmas lights, and we had our own TV to watch the ball drop. Not to mention the view is beautiful. They don’t call it Rare View for nothing.

I was promptly greeted by our fantastic waitresses, Sarah and Jessica, who took care of us the whole night and they helped set us up. They were always smiling (even if there were spills), and they didn’t miss a drink or a glass of champagne. Needless to say, we loved them.

The music was a great mix of top 40 and hip hop, so people were dancing practically all night. My feet paid for it later, but in between all the dougie-ing and shufflin’, we stopped for some food. Rare makes amazing burgers and fries, so I was happy to see that the passed hors d’ouevres included mini versions of them. The fries were skinny, salty and crispy; I would say those were the most popular item of the night as I saw many empty cones lying around our area later.

The burgers were no slouch either – mini sliders came around and were scooped up immediately by my crew. Normally sliders can be a little dry, but everyone agreed that they were moist and tasty. The bun was a little thick for my taste, but either way I wasn’t complaining. My favorite part came later on when a friend of mine came up to me and told me that she doesn’t like tuna or tartare, and she loved Rare‘s tuna tartare. I think that says something without saying much…

The night was a big success, and for New Year’s Eve, that IS actually a lot to ask for. I would highly recommend Rare for a birthday, private event, or even New Year’s Eve in 2012! They didn’t overcrowd the space which was also nice because we actually had room to move, however the one downside was the limited bathroom options. When the line got too long upstairs we had to take the elevator down to the lobby. #firstworldproblems I guess, but still. Drunk people who need to go can get feisty on a long line..

By the end of the night, all of my friends had the same reaction (which I was beyond thrilled to hear): “Dara…you did good!”

Special thanks to Erin Kerrigan and Shari Bayer for helping me set this up. You both rock!  🙂