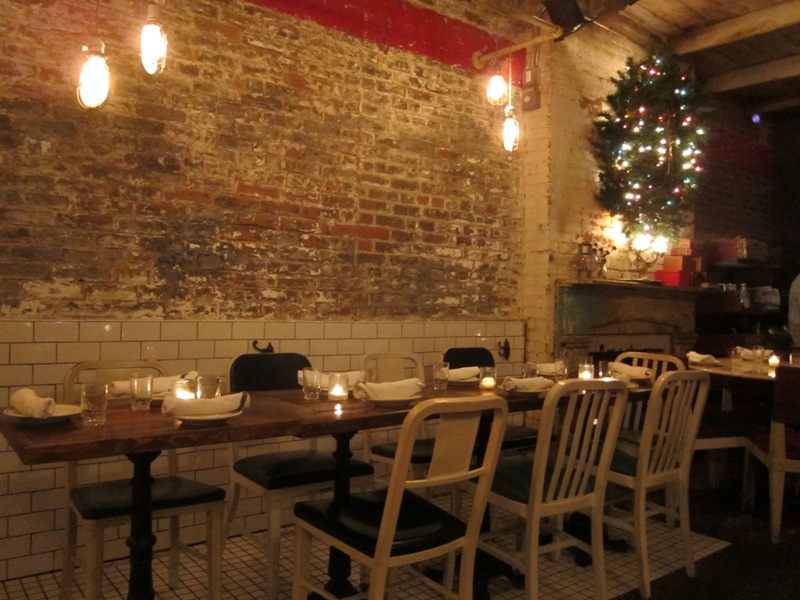 The Pan American highway stretches over 16,000 miles from Monterrey, Mexico all the way down to Buenos Aires, Argentina. Oficina Latina may be located in the trendy Soho area of New York City, but that doesn’t take it away from it’s roots; from the inviting and loungey seats in the back of the restaurant to the white-tiled bar in front, Oficina Latina makes a nice little rest stop with an eclectic menu to choose from.

We started out with some of their specialty cocktails, because when you feel like you’re in another country, it’s perfectly acceptable (if not preferable) to try out one or two drinks. The blackberry caipirina was not too sweet and a little tart, but my personal favorite came from the slow heat of the chipotle mezcalita margarita. This might be an acquired taste, but I happen to love spicy drinks, so this really was a perfect post-work cocktail – it wakes you up before it knocks you out.

The fun part of Oficina Latina’s menu is discovering where your dish hails from; for example, the albondigas are traditional meatballs from Mexico, therefore it will say “Mexico” next to the dish. Or the arepas are from Venezuela..I never even knew that. Who says you can’t eat and learn at the same time?! The albondigas were made of ground pork and covered in a slightly sweet and thick tomato sauce – they were probably one of my favorite appetizers. The arepas filling was good (chicken and avocado salad), but I thought the corn cake was a little dense and a bit cold.

Now for the frightening part: shrimp heads. I don’t know why it doesn’t occur to me to ask the more authentic places if they serve shrimp with the heads on. We ordered the Camarones al Ajillo (Chile), which are jumbo shrimp sauteed with olive oil and garlic. Simple, delicious, but without heads would have been better. I had to have Alexis shell them for me because I refused to touch them until they were decapitated. Off with their heads, I say!

I don’t think it’s acceptable to visit a Pan American restaurant without trying something with plantains, so we ordered the Tostones (Guyana), which are deep fried, flattened plantains. Oficina Latina serves these puppies with a spicy sauce and queso fresco (cheese) for dipping, unfortunately I think that’s because the tostones on their own lacked flavor. They needed some salt for sure, and the outside was not super crispy, but once you dunked it in the spicy sauce and cheese, it seemed as though all was forgotten. Good thing it had backup.

For a restaurant that walks a line between tapas and traditional, the portions are pretty large. Case in point: the Feijoada (Brazil). I had heard from a few people that this was the dish to get here, and I am happy to report that the Feijoada lived up to the hype. A massive wooden serving bowl comes out (that spins like a Lazy Susan) with compartments including the following: roasted pulled pork leg, black beans, spinach with bacon, sweet plantains, and rice. I wasn’t sure if I was supposed to eat them separately or mix them together in a bowl, but it smelled so delicious I just started attacking the different elements of the dish. No patience. The pork was perfectly seasoned and tender, the spinach was still a little crisp, and the beans are slow cooked, so they had a nice smokiness to them. I could barely make a dent in this dish thanks to the appetizers, so I took it home and had it for dinner the next day and it was still delicious, even though I ate it off a paper plate out of the microwave.

Based on the aforementioned gorge-fest, we didn’t have much room for dessert so we skipped it. I know, very out of character for me. Though if a restaurant can manage to satiate my appetite on tapas and one entree, you know they’re doing something right. I would like to go back to Oficina Latina soon; there are still so many places I haven’t gone to! Argentina, Uruguay…

24 Prince Street (btwn Mott and Elizabeth)