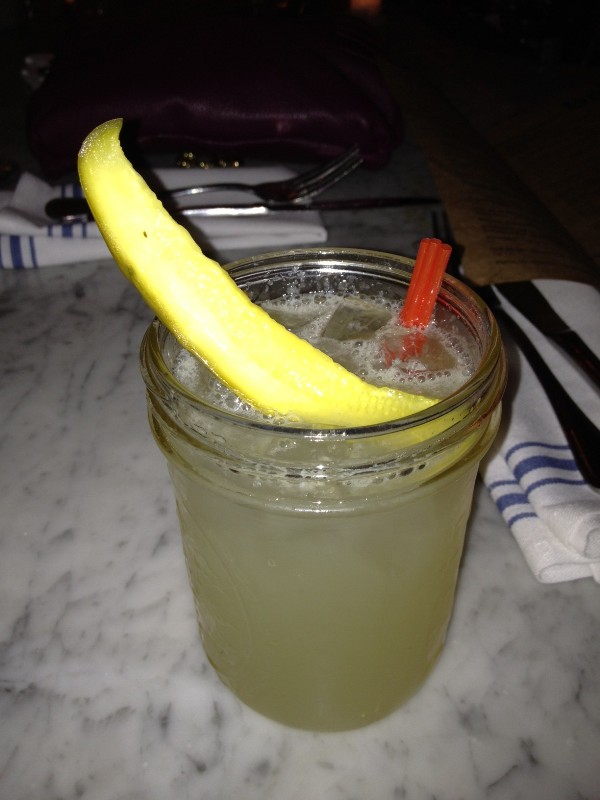 Jacob’s Pickles on the Upper West Side might have some of you saying, “what’s the big dill here?” or “I’d pay a nickel for that pickle”… Or maybe you wouldn’t say either of those things because they’re really bad puns and your mouth would be too occupied with deliciousness anyway.

As a proud pickle lover, I’m ashamed to say that this one completely flew under my radar until recently, but I’m so glad I was introduced to it. The restaurant itself is casual and fun, with the decor consisting of a lot of pickle paraphernalia. Shocking! It’s got an old-school feel to it, and that Jacob tries to squeeze pickles in practically anywhere he can (that’s what she said). Pickle brine margarita? Yes they have that. Dirty pickle martini? Yup, that too. Fried pickles? DUH. What’s a pickle without a frickle?!

So…about those frickles. If you think you don’t like fried pickles, you are wrong. Or maybe you just haven’t had these yet. I have had my share of fried pickles in my day, but these are high up on the list of the best ones I’ve tried. They are spears instead of round chips (which is what I’m used to), coated in what seemed to be a tempura batter, so it was extra crispy, and served with a spicy mayo for dipping. If you wanted to hurt me, you could wave a bag of these in front of my face and not let me have one. I would probably attack eventually, but I’d be really sad for a minute or two.

The rest of the food at Jacob’s Pickles is mostly soul food, with things like fried chicken sandwiches on biscuits, mac and cheese, cheese grits, and even a cheeseburger on a biscuit! NOM. Both of us had the fried chicken biscuit sandwiches because they sounded the most artery clogging and delicious. My pick was the fried chicken smothered with mushroom gravy and aged Vermont cheddar cheese on a buttery biscuit. And a side of cheese grits, naturally. They don’t play around with that gravy here – when they say smothered, they mean smothered. I was hardly complaining, but even I couldn’t finish this. It was awesome though, and I normally don’t even like white gravy, but it was more cheesy than anything else, so it was a perfect contrast for the crispy chicken. The buttery biscuit is flatter than a biscuit you’re used to seeing, but it tasted just as good. If I had to describe these sandwiches to someone without using ingredients, I’d call it, Nap On a Plate. It’s one of those food-coma-inducing meals.

Even if you’re not a fan of pickles (idiot!), Jacob’s Pickles has many things on the menu that don’t include pickles and sound equally scrumptious. I plan on going back soon for the pickle sampler and the pickled eggs. Stop judging me! I’m Dara and I’m a pickle-holic…