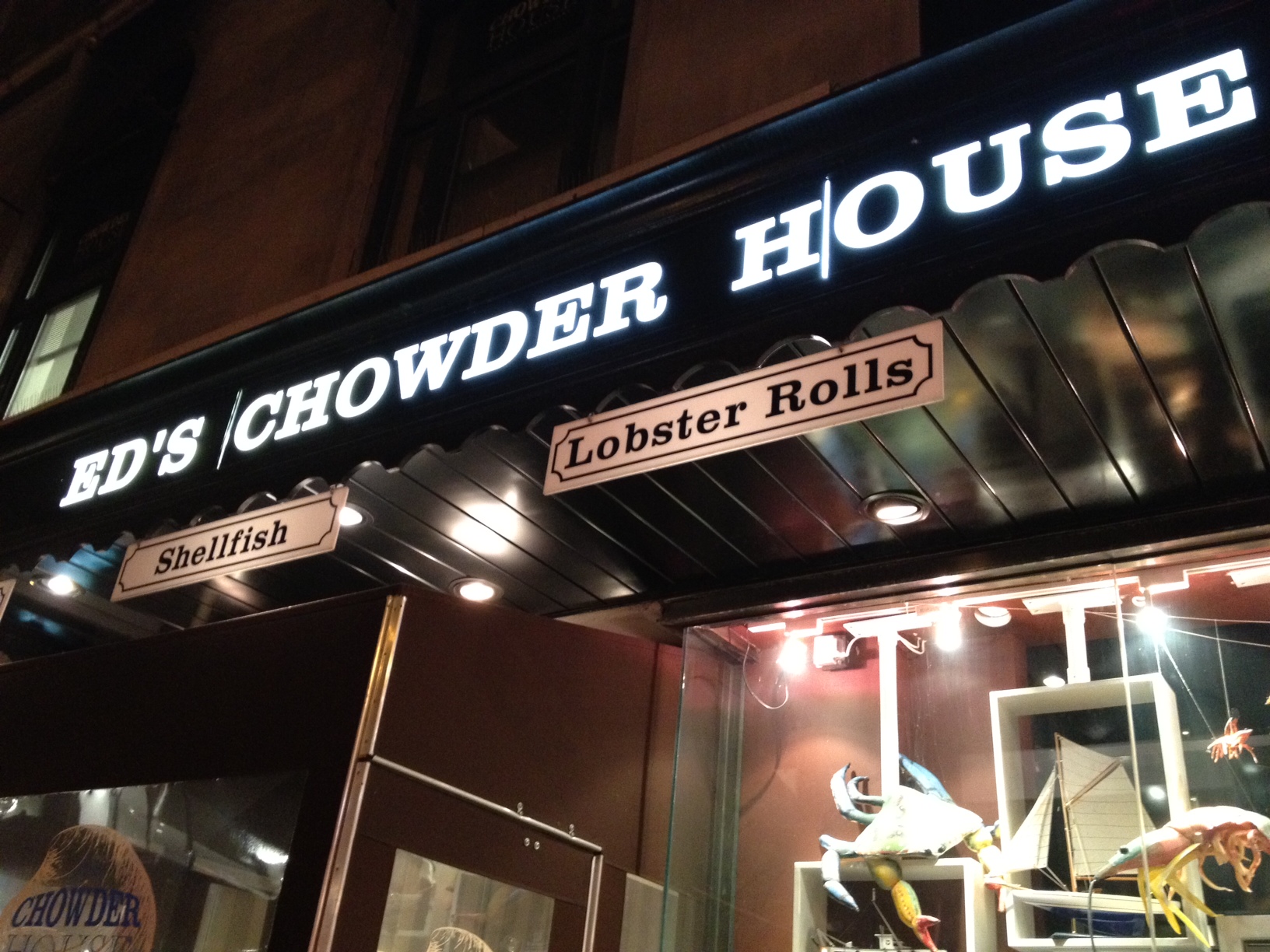 On this edition of Restaurant Week Roundup, we will be traveling to Asia and India via Pranna in Flatiron, and then back to the states with some New England clam chowder and seafood from Ed’s Chowder House on the UWS. The main difference I will point out here immediately would be portion sizes. A big issue I have (and what I imagine most people have) with RW is that (usually) the portion sizes are small, but Ed’s Chowder House wins that battle hands and spoons down. Details to follow..

Located in the Empire Hotel, Ed’s Chowder House is a lovely restaurant situated across the street from Lincoln Center in the heart of the Upper West Side. The ambiance is lively but not loud, the decor is a bit nautical, and the crowd is a mix of locals (read: older) and young business casual types. It’s a good place for a date or for a family dinner – you can’t really go wrong here. The RW menu sounded promising, and we were even more impressed with the portions (as mentioned above). The New England clam chowder was served in a huge bowl, with chunks of bacon, potato and clam floating throughout. I don’t even LIKE clams but I felt I couldn’t go to Ed’s Chowder House without trying the CHOWDA. It was delicious. Nick (my dining date for the evening) and I just put the bowl in the middle of the table and shared the whole thing. Chowin down on chowder.

For mains, I had the shrimp and squash risotto, and Nick had the salmon. Shrimp and squash risotto was good but oh-so-buttery. Nothing wrong with butter by any means, but I felt like I could oil up an entire person with the amount of butter in there. The shrimp was cooked perfectly and the pieces were large, however I felt the rice could have used a few more stirs around the pan..it was a little al dente for my taste.

The salmon was actually a much better call. Very tender and flaky, almost sweet, the salmon sat atop mustard greens with a toasted barley and roasted shallot vinaigrette. The balance of flavors were excellent, and the vinaigrette didn’t overpower the salmon.

Truth be told, we could have done without dessert, but thank god we didn’t pass this one up. The chocolate tart with espresso ice cream (Nick had vanilla – boo) was just magical. The chocolate was smooth, dense, and very rich, paired with the slightly strong espresso ice cream, it was indulgent. I can’t describe it any other way except for pure. chocolate. bliss.

Now let’s spice things up a bit. Pranna is a large restaurant/bar/lounge in Flatiron (great for private parties by the way), with Southeast Asian and Indian influence in the cuisine. Ange was my dining date for this meal, and we both thought that it was a really nice place to go for drinks post-work, as well as a date. Just ask the couple next to us sitting next to each other (I hate that) and making out the entire time (hate that even more). I prefer drinks with my dinner, not voyeurism. But anyway…

The waiter brought out some complimentary cauliflower naan with tomato chutney and raita. My first question is, why has this not replaced regular bread in ALL restaurants?! It was SO good. So fresh and hot, the bread was slightly chewy and had a nice onion and herb flavor. The tomato chutney was a nice addition also – made it taste like an Indian version of pizza. YUM. We ordered an extra serving because it was that good.

The appetizers were good, but nothing too impressive. Dumplings with a nice soy dipping sauce, and hangar steak with palm sugar ponzu sauce, gorgonzola, and way too much cilantro. We know how I feel about cilantro. However, the steak was cooked perfectly and I liked the gorgonzola/ponzu sauce a lot. So I suppose that one was a win.

The chicken tikka masala was by far the better entree. If you’ve never had it before, it’s usually chicken marinated in yogurt and spices, then stewed in a toasted spice and tomato-yogurt sauce. It sounds odd but it’s very good and very spicy. Pranna’s version has huge chunks of chicken in a boatload of sauce (now you know why we asked for more naan), served with rice of course. When you’re eating something this saucy and spicy, you need to pour it over some jasmine rice. YUM.

I had the chili glazed prawns…and guess what?! No heads! Thank god. I specifically asked the waiter if the shrimp had heads. That’s how serious I am about this. It was tasty, but the portion was small and to be honest, it tasted like almost any other “chili-glazed shrimp” dish I’ve had.  It wasn’t bad at all, with a nice amount of heat, but it didn’t do anything to stand out…le sigh. Here’s something I’ve never had before: a roti pancake. Similar to a crepe, this was “roti” (South Asian flatbread) filled with bananas, cream, and drizzled with dark chocolate sauce. Yum. This is a heavy dessert with a gooey texture, but it’s definitely worth it if you’re craving something chocolatey. Which I basically always am.