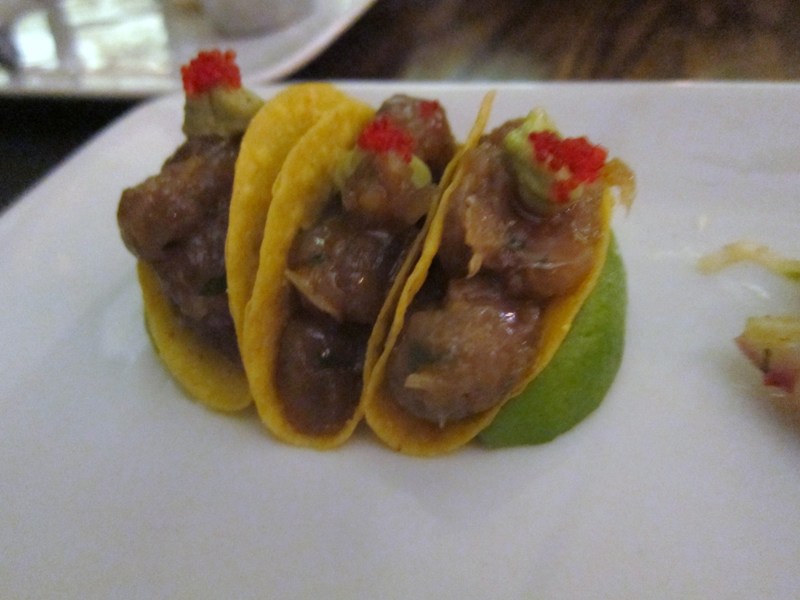 What do you do when you visit a restaurant with a slightly schizophrenic menu? You go a little crazy (pun intended) and order a lot of food, all the while risking food coma. At least that is what we did at Highpoint Bistro & Bar in Chelsea, and it wasn’t a bad experience at all, minus the food coma. But again, that was self inflicted…

I’m not so sure I understand the decor or theme of Highpoint, but it was sleek, comfortable, and the service was great. Michael, our waiter, was happy to recommend drinks and even changed mine when I didn’t like the one I chose (too sweet). The menu really is all over the place, so if you’re not a picky eater, having a helpful waiter around to help you choose the right dish is an awesome thing. So we went with the following to start: tuna tartare tacos (awesome), sliders, and “angry” calamari. In case you can’t figure it out, the “angry” calamari is in reference to the spicy dipping sauce it’s served with, which was almost like an Asian sweet and sour sauce, reminiscent of General Tso’s. The calamari is super crispy and maybe a tad greasy, but it was still quite delicious.

What’s bar food without sliders? No joke, these were some of the juiciest sliders I’ve ever had. Most of the time sliders are overcooked and dry, but these were actually dripping when you bit into them. YUM. Perfect bar bite.

Did I mention the bread that’s served in a miniature shopping cart? Again, not sure how this plays into the theme of the restaurant, but it’s cute. I enjoy some whimsy with my meal…

Normally when I go to a restaurant that serves mainly bar food, the last thing I’m going to do is order a traditional dish like meatloaf or steak, but everything we had was really good, so we threw caution to the wind and ordered just that. The steak was cooked perfectly, seasoned well, and served with chimichurri sauce and crispy golden fries. If you’ve never had chimichurri on steak, allow me to tell you with force: get on that! Parsley, garlic, olive oil, red pepper flake. It just melts into steak…I can’t explain how much I love the stuff. The meatloaf on the other hand, was a bit underwhelming, but I guess that’s because it’s meatloaf? I was never a big fan.

Feeling the effects of early onset food coma, we were about ready to throw in the towel when Michael suggested something called The Caramel Experiment for dessert. I held up my hand in objection, but curiosity eventually got the best of me and I caved. We were glad we did, at least while the sugar was still lingering on our tongues. Now let me explain this one: a platter for two comes out with your usual dessert fondue fixins like brownies, pretzels, candied walnuts, mini cupcakes, homemade marshmallows and fruit. Then you see a large block of something yellow that looks like soap; this is a slab of himalayan rock salt, which gets topped with caramel. Making the connection yet? As the caramel hits the salt, it becomes slightly salty, and the longer it sits, the saltier it gets. So if you’re the type who loves salted caramel (like me), then you will LOVE this. They also give you a bit of melted chocolate on the side if caramel isn’t your thing. Despite busting bellies, we did some damage to that platter.

Despite the confusing decor and mixed up menu, I thought the food was pretty delicious. It might even be the perfect place to go if you’re not in the mood for anything in particular, because there are plenty of options that don’t necessarily speak to one genre. And if you’re going to have a crazy menu, why not have it in NYC where the crazies roam freely? Perhaps there is an underlying theme after all…