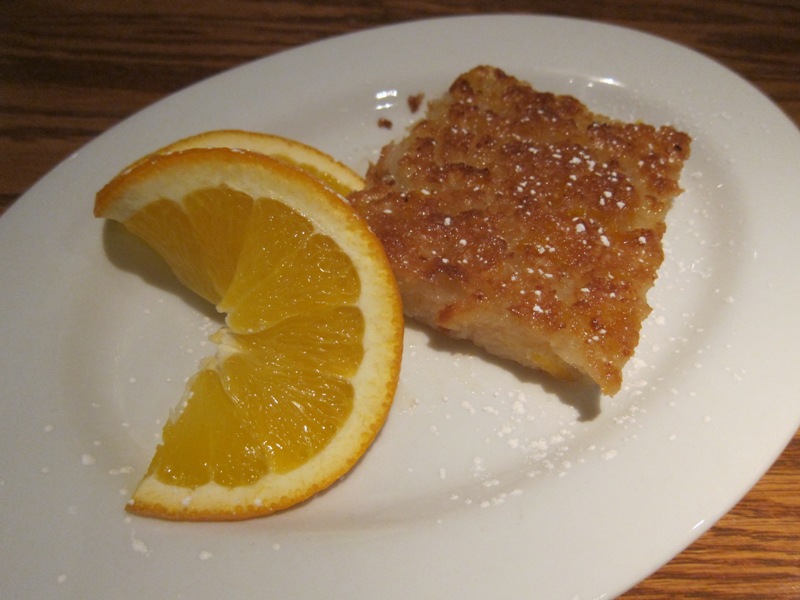 Parsley, sage, rosemary and Thymari. Maybe that’s not the exact lyric from the song, but now you know what Thymari means in Greek (thyme, for those of you who don’t know the song – for shame!). Being Greek and from Astoria, I consider myself pretty well-versed in the cuisine and am always looking for new places to try. Thymari popped up on my radar recently, so I took my brother with me for a little tasting. Two half-Greeks equals one full one, right?

The space inside Thymari is not your standard blue and white, Aphrodite, and Parthenon backdrop (thank God); it’s classy, simple and inviting. Exposed brick, soft-lit sconces and an impressive wine collection proudly displayed says “stay a while”. The service is indicative of most Greek restaurants I’ve been to as well: they just want to feed you and make you happy. Fortunately, they picked the right people for the job.

The menu is a mix of traditional dishes like moussaka and spanakopita, with twists on the staples like feta saganaki, seafood orzo, and cornmeal-crusted calamari. We started out with the traditional Greek salad and the Pikilia, which is an assortment of dips that change daily. On this day, it was babaghanoush (smoked eggplant dip), taramosalata (fish roe), and tyrokafteri (spicy feta). The greek salad was great, but to be fair, it’s Greek salad: tomatoes, cucumbers, red onion, feta, olives, olive oil and oregano. Not much to screw up there. The dips were hit and miss, the one miss being the tarama – I hate to say but it was a little fishy. The babaghanoush was awesome, I loved the creamy, smoky eggplant.

If there is one thing the Greeks know how to do, it’s meat. Lots and lots of meat! Loukaniko is one of my favorite Greek sausages, it’s usually laced with orange zest, lemon zest, and a boatload of spices. Thymari’s was delicious, with red peppers, onions, garlic, and plenty of herbs – they make it in house and give you a sizable portion for an appetizer. Good stuff.

Saganaki is a popular Greek appetizer (translates to little frying pan) made with a block of Kaseri cheese, floured and pan-seared, then served in the pan with lemon juice. Thymari’s take on this is interesting, and we really enjoyed it. They use feta cheese, “bread” it in sesame seeds, pan-sear it and serve it with a berry compote. If you like feta, you will probably like the contrast of the salty cheese and sweet berries – it was a really nice appetizer.

Whenever I go to a Greek restaurant, I feel it’s my duty to order something with lamb; unfortunately, I also wanted to try a seafood dish. You can’t go Greek without trying the fish! I ordered the seafood orzo, with mussels, shrimp, feta, tomato and fresh thyme, and Cliff had the leg of lamb roasted with potatoes and a honey-wine reduction. Both solid entrees, but I’m going to give the edge to the seafood orzo, only because I’m somewhat of a lamb purist, and I prefer it sans sauce. The seafood and the pasta were cooked perfectly, and the seasoning was excellent. I could have eaten that for two days, but, it’s fish and that probably wouldn’t be a good idea..

My brother Cliff can plow through food like it’s no one’s business, but at this point, even he was getting full. We had enough room for dessert, naturally, so we tried two…or three. The baklava (have to), a homemade honey-orange sponge cake, and a homemade Greek panna cotta with cinnamon and almond dusting on top. LOVED the spongecake and the panna cotta; the flavors worked so well together and were perfectly executed. The spongecake is syrupy and sweet with a hint of citrus, while the panna cotta was thick, creamy and perfumed with cinnamon. We devoured them.

When I met with Kostas, owner of Thymari, he said that his vision stemmed from wanting to create an environment where people can sit, talk, and enjoy each other’s company, all the while enjoying great food. He believes that the food is important, but it’s not as important as the conversation. In my world, I would probably put the food first, but that’s just me…and maybe my brother who said it best: “be snotty, be ineffectual, but at the end of the day, put something brilliant on my plate.” Cliff rarely puts together a sentence I can agree with, so Kostas definitely accomplished his wish: he made me and my brother bond over a good meal. As the Greeks say, BRAVO!