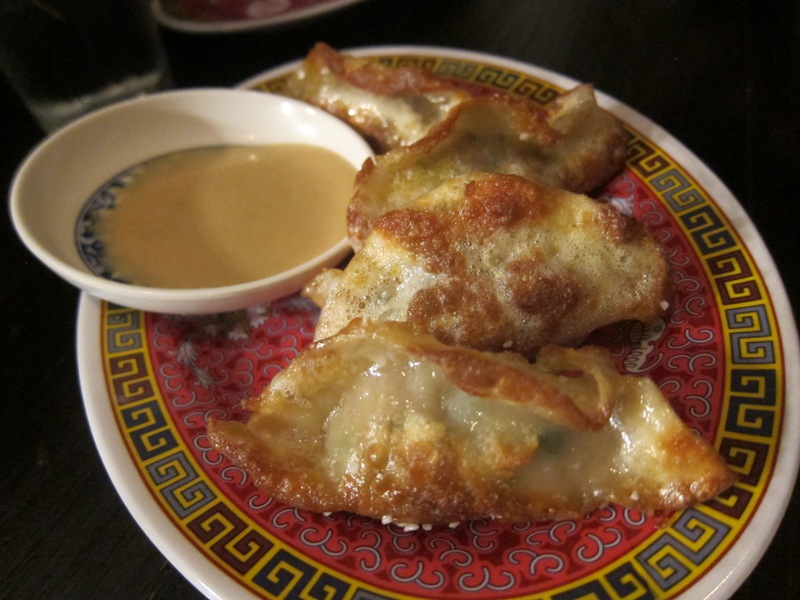 When you live in Williamsburg, Park Slope is one of the many other places in Brooklyn that’s easy to get to by car, but kind of a pain in the ass to get to by train. So I took the lazy approach and hopped a cab there to meet my friend Josh aka the Foodie Magician for some dumplings and asian fusion fare. In short, it was well worth the cab ride (in traffic) and would probably be worth the train ride as well. The place was packed on a MONDAY NIGHT, so that should tell you something right there..so let’s dive right in.

Pretzel and Chive Dumplings. I would like to describe the deliciousness of these little pockets of happiness, but I think the pictures can do that for me. I will tell you that they really do have a buttery, pretzel-y taste on the outside, and inside is a pork and chive mixture that is just perfect with the spicy mustard.

Saigon Crepes. This is not your typical soft crepe. This is a crispy, eggy crepe with smoked shrimp, chinese bacon, sprouts, and mint on top. Normally, I’m not a huge fan of mint (it’s a blood-relative of cilantro and you know how I feel about cilantro), but it works here. There’s a vinegar-chili syrup that you pour over the top of the crepe and it soaks into the mint and tastes really fresh and delicious. The texture is awesome too – crunch crunch crunch!

Crispy Oyster and Bacon Pad Thai. Another thing I’m normally not a big fan of is the oyster. That said, if you fry it, I’ll try it. This pad thai was BOMB. The equation is simple: bacon + fried anything + noodles = trifecta.

Beef Short Ribs. I was concerned that they had only given us chopsticks here, but I soon found out that a knife was not necessary for the short ribs at Talde. They fall apart when you poke at it with the chopsticks, and the pickled onions on top made it even better. If I had any criticism there, I would say that they need to put more of the pickled onions.

#369 market vegetables. I have no idea why they are called that, but I do know that they were crispy and fresh, albeit kind of boring. They were perfectly cooked but slightly under seasoned. However, I felt good that I got some vegetables in me..

Halo-halo. What? Yes exactly. This is a traditional Filipino dessert consisting of shaved ice, evaporated milk, and various toppings ranging from bananas and plantains to tapioca balls. Talde takes this interesting dessert and makes it appealing to the masses. How do they do that? Throw some Cap’n Crunch cereal on it! When the waitress described it to us, I was really unsure about it, but it turned out to be really good! Like a sweet bowl of cereal with a lot of surprises in it and I don’t mean a toy or stickers. This halo-halo had bananas, coconut cream, kaffir lime juice, tapioca balls, fruit, Cap’n Crunch, and condensed milk. It’s their only dessert at Talde, but trust me it’s a good one.

Talde now serves brunch as well, which I’d be excited to try. Guess I’ll have to either get used to long train rides or save up some money for cab fare..