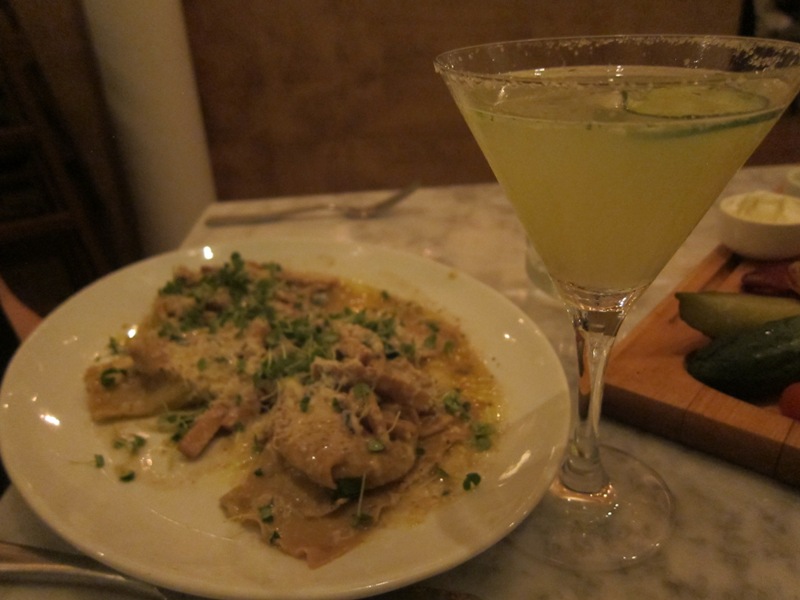 One of the things that really sucks about being a Jew (or half-Jew) in New York City is that I have a grandmother who lives in Florida. Many Jewish people in NYC suffer from this same problem, I feel. The young ones stay, the old ones flock down where it’s warm and arthritis is kept at bay. So when you want matzoh ball soup or chopped liver, you can’t just hop in your car or on a train. Nah. You have to get on a damn plane. I do think that my Safta’s food is worth the trip, but let’s face it, I crave chopped liver and potato latkes more often than I’d like to admit and I bet you do too; that would get real expensive and time consuming, which is why I am very happy I discovered Kutsher’s with some good friends. Kutsher’s is what I like to call Japas = Jewish Tapas. I rarely go to a restaurant in the city and think to myself, “wow this is better than my Safta’s”, yet that happened quite a few times here. Sorry Safta. Please don’t disown me…

Let’s talk latkes! Sorry I’m getting excited. Actually let’s talk about decor first. The blonde wood and crisp lighting lends a sleek feel to the restaurant, so I want to say that it tastes like your grandma’s cooking (if your grandma were a trained chef), but the decor is more modern and trendy than the plastic covered furniture and wax fruit that sits atop your grandmothers dining room table. File that under “things to be thankful for” and move on – the food makes up for any lack of direction in the decor anyway.

Is it time to talk about latkes yet?! Ok perfect. The latkes at Kutsher’s are the super golden brown, crispy kind. Aka they’re delicious. I actually like latkes both ways – they can be crispy to the point where you may risk a roof of the mouth scrape, but I also like them a bit softer with a more intense onion flavor. Here you can have them with apple compote (fancy word for apple sauce) and sour cream (aka the traditionalists choice) or sour cream and three caviars. We stuck with the traditional option, but Kate (token Jew #1 of the evening) said she has had latkes w caviar and it’s not to be missed. Hmm ok, maybe next time.

Now, Jew or no Jew, who doesn’t love pigs in a blanket?! Kutsher’s makes them with an actual hotdog, so it’s one big hotdog wrapped in puff pastry, then cut into bite size pieces served with mustard (duh) and ketchup. Some people are against ketchup with hotdogs, but I happen to like both. This is also why I’m a halvsie..I guess I missed the memo on mustard-only hotdogs.

The butcher’s plate was a little strange – I didn’t get why they cut the pastrami so thick. It wasn’t bad, but it was just a strange texture since I’m not used to pastrami being thick-cut like that. It was like a flank steak. The spicy salami on the other hand, was cut perfectly, and the chopped liver was almost as good as my Safta’s – and that is saying A LOT. Chopped liver is definitely an acquired taste, so if you have never had it, proceed with caution. It smells funny, and it might leave a weird aftertaste if you’re not used to it. As my good friend Matt so delicately put it once: “it tastes like a fart in my mouth”. So…you get the idea. For most Jews though, chopped liver is like a little bit of heaven on bread.

I don’t really think of meatballs when I think of Jewish cooking, but…now I will. The brisket and short rib meatballs were AWESOME. So tender and flavorful, with a semi-sweet sauce of caramelized onions and a tang from creamy horseradish sauce…oh man. Heavenly. Dan, our other token Jew, wanted to double up on that order they were so good. I think there might have been a heavy hand on the sauce, but hey, that’s what bread is for, right?

You know what’s great about being Romanian? I honestly didn’t know until I came to Kutsher’s and had the grilled Romanian steak with braised greens and schmaltz fried onions. “What is schmaltz?”, you may ask. Well, aside from being a funny word, it’s essentially chicken fat. And they fry some onions in it. It’s amazing, frankly, and this whole dish is one composed piece of delicious. The steak was medium rare, and it just MELTS in your mouth, with the fried onions and greens. All of us flipped over this steak, and I am proud to be Romanian now.

Ready for more schmaltz? I know you are. How about DUCK schmaltz fries with horseradish aioli? Yea. How bout that? Jews love asking questions, don’t you know?

I will spill the one downside of the meal right here: the Crispy Artichokes Alla Judea (lemon, garlic, parsley, parmesan). Sounds great right? Wrong. They were too dry (I guess that’s the crisp part?) and too bland. You’d think that combo of flavors would mean a burst of flavor but it really fell flat. Oh well.

Unfortunately, there was no room for dessert after three rounds of drinks (try the cucumber margarita), but truth be told I wasn’t that excited about the dessert anyway. I’m not a fan of black and white cookies, and they have a black and white cookie ice cream sandwich or something. I’m sure it’s delicious but I didn’t feel like trying it.

Despite the last couple notes above (and I could be totally wrong about the dessert), I would definitely recommend Kutsher’s for a family dinner, a client lunch, or a date…preferably a JDate.