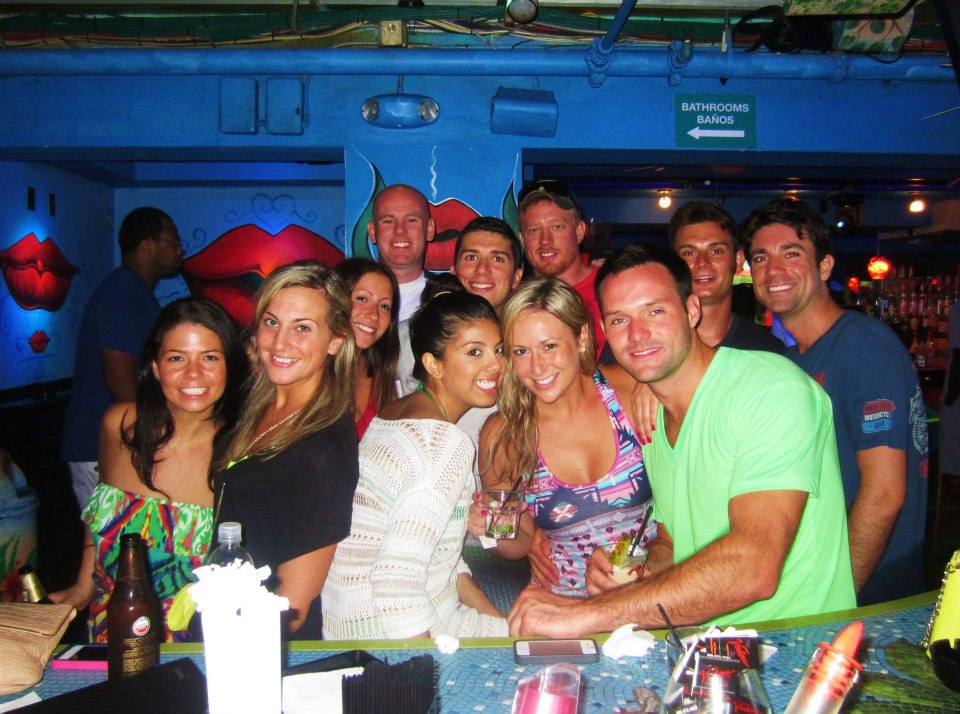 In yet another post brought to you by my friend Greg, I give you…the Neon Party and other random acts of foolishness in Miami. Just barely dodging Tropical Storm Isaac last weekend, Greg invited a bunch of us down to Miami for his 28th birthday. Why? I think the better question is Why Not? These are the words Greg likes to live by – you may remember him from my Dubai trip a couple months ago – and that’s why he is referred to as The Dabbler. Us? Well, I guess you can call us The Dabbler Hangers On, or maybe just The Dabblers.

Renting a hotel room at The Fontainebleu? Nice. Renting a few “apartments” at The Boulan in South Beach? SICK. This place is relatively new, and while it may not have the amenities of a hotel – we had everything we needed: a rooftop pool, Dominos delivery, and of course, walking distance to Mynt nightclub where the Neon Party took place. Walking home in heels at 4 am was never so easy.

Let’s talk about that Neon Party. You know when you see a bunch of people dressed like assholes and they cut the line at a club and walk right in? Well, we did that. And I hate to admit it, but it was hilarious and kind of awesome. I never get to cut the line unless I’m in Vegas and can sneak in behind a girl wearing something resembling a loincloth with rhinestones on it…so shut up and let me have this. Our whole crew was decked out in neon garb for Greg’s birthday celebration, and while the champagne flowed, we kept on dancing like bright little glow worms…

So that was the pre-game…this is mid-game…

The next night, we decided to class things up a bit at Barton G restaurant. I took the reigns of the dinner reservation (duh) and decided to go to one of my favorite spots in Miami. If you’ve never been to Barton G, you need to go immediately; not only is the food excellent, but the presentation is over the top, whimsical, and a little ridiculous. Upon entering, we saw a plate go out to a nearby patron, and there was a fork the size of a child sticking out of the top. It’s definitely an experience and it will make your jaw drop. We did the prix fixe menu since we were a large group ($69 pp not including tax/gratuity) and I was concerned that we weren’t going to have enough food Well…I was dead wrong. The portions at Barton G are rather large (sometimes due to the ridiculous presentation), and we were so full by the end of this meal, I was pretty sure I needed a nap and someone to burp me.

The mac and cheese at Barton G is in a league of it’s own. This was seriously one of the best mac and cheeses I have ever had. Period. Al dente pasta is covered in extra creamy cheese sauce, then baked to golden perfection, and presented to you on a giant mouse trap, of course. We had to take home some extra mac and cheese, and let me tell you, cold mac and cheese from Barton G makes for excellent hangover food. Try it before you judge me.

I have to take a moment to point out the excellent service at Barton G as well. I originally booked this reservation for 12 people, and I had added on a few more the day of, making the total 16 people. When we got to the restaurant and four of those extras couldn’t make it, we were told we had to pay to cover their plates. I had ZERO clue this was a rule, and told them it seemed a little unfair to charge us $69 pp (plus tax) for people who couldn’t make it, especially when I was unaware of the stipulation. I asked if there was anything they could do, and they said they would work it out somehow, which didn’t give me much hope. Awaiting the news patiently, the waiter came over and said that they would only charge us for four dishes of our choosing, but we didn’t have to pay $69 pp. So naturally, we ordered 4 mac and cheeses, and 4 cheddar mashed potatoes for a total of $80. I thought that was a good compromise (as opposed to paying an extra $300) and they were attentive to our group the whole night, especially when it came to keeping the wine flowing! I definitely recommend Barton G for food AND service, which is a rare find in Miami.

What’s a birthday celebration without some cake? Or a giant ice cream sundae that can feed 10 people? Enter the “parade of desserts” for the birthday boy! There was a mint-chocolate mousse served in a big clay pot with a shovel (meant to look like a flower pot filled with dirt), apple pie a la mode (my fave) served in a wicker picnic basket with apples, and lastly, the giant ice cream sundae in a martini glass complete with sparklers. Thanks to the good company and Barton G’s hospitality, this was one of the best meals we have all had in a long time – it was silly, fun, and over the top. Basically, it had Greg written all over it!

I spent most of this Labor Day Weekend recovering from my summer trips: Dubai, Maine, Boston, Fire Island, Miami…and let’s not forget Warrior Dash. I have had a busy few months, but I couldn’t be happier to have spent it with some amazing people. Time flies, so make sure you don’t waste a minute of it being bored with people who aren’t worth your time. Do like The Dabblers and make every minute count – because at the end of the day, what else are you going to do? Work? You only do that to build up funds for vacations and you know it.

Personally, I am looking forward to Fall…I wonder what that will bring? Hopefully something that tastes like pumpkin and cinnamon with a shot of McCallan on the side.