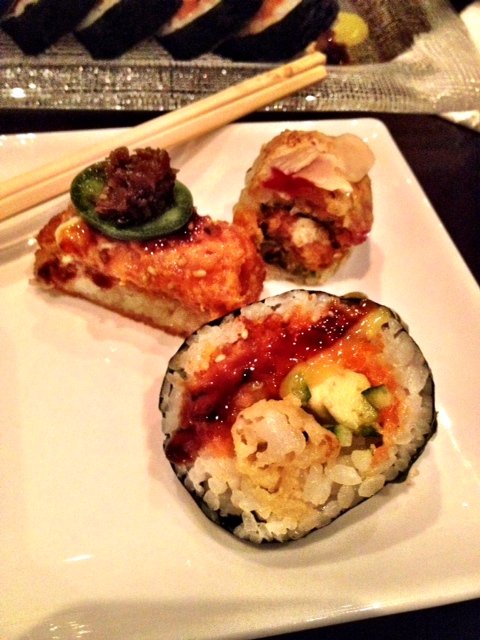 When Sandy hit, I was afraid to eat sushi for a little while; ignorant, perhaps, but I wasn’t taking any chances. My supermarket was out of iceberg lettuce, for god’s sake. ICEBERG! The underachiever of the lettuce family – so I wasn’t really expecting fresh fish anytime soon. This was a blessing in disguise though, as it made my experience at Momoya that much more enjoyable. When you’re craving sushi, you usually want GOOD sushi – and Momoya is GREAT sushi.

Bustling even on a Tuesday, the friendly atmosphere and delicious sushi makes this haunt a local fave. Most restaurants in this area are nothing to write home about, but Momoya definitely is…hence why I’m writing about it, duh. My friend April and I split all of the dishes, so let’s jump right in to appetizers. Can we skip the part about edamame though? I mean, it’s edamame – if you can fuck that up, congratulations, you are in the wrong business.

Here’s one that was a totally delightful surprise: the Warm Mushroom Salad. Sounds blah, right? Negative. An eclectic mix of mushrooms (enoki, shitake, button) on top of mixed greens that wilt ever so slightly, then dressed with a savory and sweet dressing. I’m not sure exactly what kind of dressing is on these mushrooms, but it’s a great, earthy dish – a nice appetizer in the winter.

I will mention this just so you can avoid it: the Miso Eggplant. It wasn’t “bad” by any means, but compared to some of the other dishes we had, it paled in comparison. The miso sauce on top of the eggplant was too much – not in flavor, but in quantity. It had a thick consistency and turned the grilled eggplant into mush. Had it been a lighter hand on the sauce, it might have been good.

Sushi time! What do you do when you’re really hungry and you can’t decide what roll to get? You get a bunch and share. Here was our selection: The Black Dynamite Roll, Momoya Spicy Tuna roll, and the Crispy Rice with Spicy Tuna and Jalapeño. They were all really great, but here’s the rundown:

Black Dynamite Roll: spicy tuna, shrimp tempura, cucumber and avocado. This is one of those rolls that looks so huge you stop and debate whether you should be the idiot who needs a fork and knife for their sushi, or if you can risk choking on rice for the sake of looking like a pro. I always go with the latter, and I have come close to choking, but I believe that sushi tastes different if you try to segment it. This roll was a bit spicy, and a lot of texture – prob my favorite.

Crispy Rice with Spicy Tuna and Jalapeño: How do I describe this? Take crispy rice, shape it into a small rectangle, and top with creamy, spicy tuna and razor thin slices of jalapeño. Then, put in mouth…savor the texture and the flavor..and thank me later.

Momoya Spicy Tuna: spicy tuna roll wrapped in seared yellowtail with slivered almonds on top. I have had many a spicy tuna roll in my life, but this was a first and very well received. The mild yellowtail and spicy tuna worked really well together and just kind of melts in your mouth. I was ok with it.

I know it doesn’t sound like much, but we were basically ready to be airlifted home after this meal so, no dessert. The sushi was filling (though it always is – damn rice), and the courses came out pretty quickly, so you don’t have too much time to digest. Quick service is both a blessing and a curse, eh? Stay turned for the write up of Parkside in Queens, where service is quite the opposite. But I digress…if sushi is your thing, get to Momoya stat.