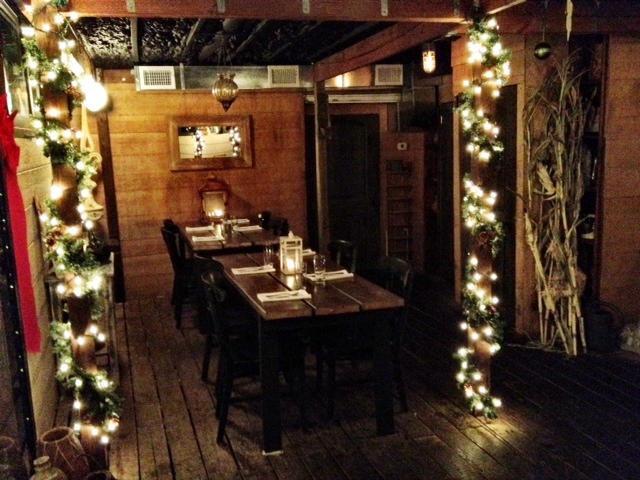 Lately I’ve been hearing a lot about the gentrification and ever-growing popularity of Brooklyn, which made me realize that aside from sleeping there, I don’t spend nearly enough time there. So when I was invited in for a meal at Hill Cafe in Clinton Hill, I thought to myself, “why not”? I live in the neighboring town of Williamsburg, and I could use some good BK eats.

The front space of Hill Cafe is on the small side, but they have a lovely heated indoor/outdoor patio area that resembled an old log cabin complete with smoky fire scent. It only took me a few moments to realize that scent was coming from a real pit fire outside in their garden (which would be cute for a private party FYI). It would have all been very romantic, had I not been there with my mother. Regardless, it was time for cocktails.

We were graced with the Apple Pie Hot Toddy which was probably the best holiday drink EVER – made with apple pie moonshine, honey, lemon, apple-cinnamon infused tea, an apple chip and apple pie filling garnish. Seriously delicious, and seriously potent. Moonshine? Yup. See ya later. This was a special for the night, but we were told it would probably end up on the regular menu.

It’s a good thing the drinks were strong, because it distracted us from the fact that we were hitting the 35-minute mark and hadn’t seen a scrap of food yet. Not even bread or anything for the table. I mean..I’m all for leisurely service but I was hungry. This set the precedent for the rest of the night; granted we got quite a few courses, but the place wasn’t packed, so even though the service was very friendly, it was definitely slow.

When I saw French Onion Soup Au Gratin on the menu, I was very excited. I’m a big soup person, and French Onion Soup is one of my faves. Cooked in a crock with a huge chunk of bread and a heaping pile of gruyere cheese melted to perfection? Don’t mind if I do. This had to be one of the best ones I’ve had in a while – no lie. My mom and I ate so much of it, we didn’t remember that we had to save room for the other courses that were coming out. Oops.

Kataifi shrimp. You don’t have to pronounce it correctly, you just have to eat it. Being that my mom is Greek (and I’m a half-Greek), we know how to pronounce it, but we haven’t had kataifi on anything other than Greek pastries. Delightfully surprised, this twist on fried shrimp is crunchy and light. Paired with a mango-jalapeno relish, it was a perfect appetizer.

Another thing I would highly recommend here: the mashed potatoes. OMG. I think they should add “Bucket of Mashed Potatoes” to their menu. It might take away from the classiness of the establishment, but it would definitely bring in a lot of business…and the Irish, I bet. We had the beef bourguignon, which is a traditional French stew (made famous by the likes of Julia Child) made of beef chuck, pearl onions, bacon (BACON!), carrots, stock, and red wine. It’s SO good and perfect for a hearty, comforting winter dish, and it’s usually served over mashed potatoes or egg noodles. This is where those glorious mashed potatoes come in, all buttery and velvety smooth. I wanted to stop eating them, but I just…couldn’t. The beef bourguignon was good but it was a little on the sweet side for my taste, I think it might have had a bit too much red wine in it.

To lighten things up a bit, we also had the salmon which was crusted with cajun spices and served over a succotash of corn, okra, spinach, mushrooms, and peppers with a side of white rice and jalapenos on top. I’m not a big fan of okra, but it was really tasty – even my mom, who doesn’t eat salmon, thought it was very good too. The rice was a refreshing compliment to the spicy fish.

Even though we were bursting at the seams, I think the saying is “there’s always room for dessert”. We had this chocolate ridiculousness which I believe was called a chocolate souffle, and the bouche du noel, a traditional French dessert served around the holidays. It’s a sponge cake rolled with buttercream or sometimes ice cream, and frosted with chocolate.  Hill Cafe’s version had three layers, and the chocolate shell was perfect with the side of ice cream and raspberry drizzle.

Like I mentioned earlier, the food was pretty solid, but I wouldn’t bank on it for a quick bite. I am curious to try out their brunch though…because brunch is one of those things that should never be rushed.