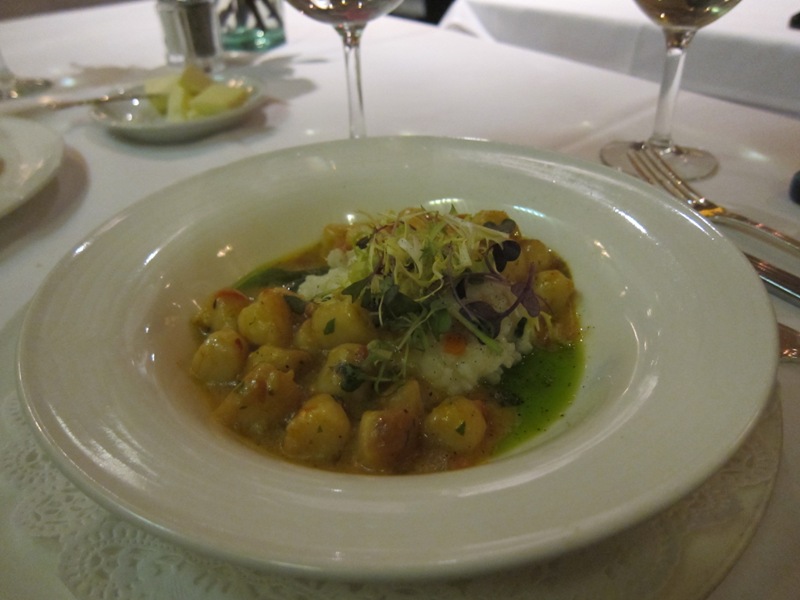 You know when you’re young and you walk into an expensive home, preferably owned by an adult, and immediately feel like you don’t belong there? That’s kind of how I felt at Le Perigord; the restaurant looks very exclusive from the outside – white curtains in the windows prevent from seeing inside, and once you’re actually inside you are transported back to 1964, when the establishment was first built. The old New York feel, the UES crowd, the waiters in tuxes – all very old school to me. The best part about Le Perigord though, in my humble opinion, is the service. We were greeted warmly at the door, taken to our cozy corner table (perfect spot for people watching) and offered a glass of wine or champagne while we browsed the menu. So far so good (and when was the last time someone offered you champagne upon arrival?) The menu at Le Perigord doesn’t have prices on it – that’s how you know you’re in for it. But hey, go big or go home, right? And so, we did.

I can’t avoid lobster bisque when I see it on a menu – I just can’t. And anytime I go to a French restaurant I feel it’s necessary to order everything that sounds rich and decadent (read: butter, cheese, puff pastry), so naturally we got the vegetable tart, the scallops with vegetable risotto, and the smoked salmon and corn muffin with sour cream. The lobster bisque was very tasty, but different than what I’m used to; there were no chunks of lobster in it, and the broth was a light brown as opposed to the pinkish hue I usually see. It was salty and rich – if I had to finish the whole thing I might have swelled up like a puffer fish and fallen asleep.

The vegetable tart was probably the most deceiving dish; for something that was basically butter and cheese in a flaky crust with some julienned vegetables running through it, it was light and delicious. I could eat a vegetable tart like that every day – I wouldn’t, due to my arteries, but it would be nice if I could.

When life hands you rice, make risotto. I know that’s not the real saying, but it should be. There is nothing wrong with risotto. NOTHING. Ok? It’s just one of the most delicious starches out there and I don’t much care for anyone who disagrees. The scallops with vegetable risotto were light, perfectly cooked, and the risotto was oh-so-creamy. There was a drizzle of deep green olive oil at the bottom that added a richness to the dish…just wonderful.

Unfortunately our last appetizer left a bit of a salty taste in our mouths. Ok, a very salty taste. I love salt, but the house-smoked salmon with corn muffin, sour cream and salmon caviar was too much. They sprinkle the dish with onions and capers when it arrives at your table (nice touch), so I had really high hopes for it, but the corn muffin was dry, and like I said, the salmon was just way too salty.

I didn’t realize this at the time, but our entree choices were kind of a play on surf and turf: lobster in coriander broth, and beef Wellington. I rarely see beef Wellington on a menu anymore (there’s that old school style creeping in!), but I’ve always liked it, so for the sake of nostalgia, I had to go with it. The lobster was the winner of the evening; wonderfully tender and the broth for dipping was a perfect finishing touch. The beef Wellington on the other hand, was a bit rare for my taste. I like my beef cooked medium-medium rare, depending on the cut. For those of you who don’t know, beef Wellington is a piece of filet mignon topped with mushroom duxelles (more on that here), and then wrapped in puff pastry. RICH RICH RICH. It’s a classic, but you don’t see it in a lot of places anymore. The beef was very tender, but I felt a little like a mountain lion chewing on a carcass – a few more degrees and it would have been perfect.

Speaking of perfect…let’s talk about souffles. Chocolate souffle. Grand Marnier souffle. Souffles everywhere. The waiter asked us in the beginning of the meal if we would like to preorder souffles for dessert. The answer to that question is always yes, just so you know. A souffle is basically a flavor base (in this case chocolate and Grand Marnier), combined with egg yolks and egg whites to make it puff up when it’s baked. It will usually fall after a few minutes once it comes out of the oven, but then it’s just a ramekin full of gooey fluffy deliciousness. You need this in your life.

If you’re feeling like having a taste of old New York, and you don’t mind splurging a little, then Le Perigord should be on your list of places to go. Would it be at the top of my list? No, but it would definitely be on there, if only for the lobster and the souffles.