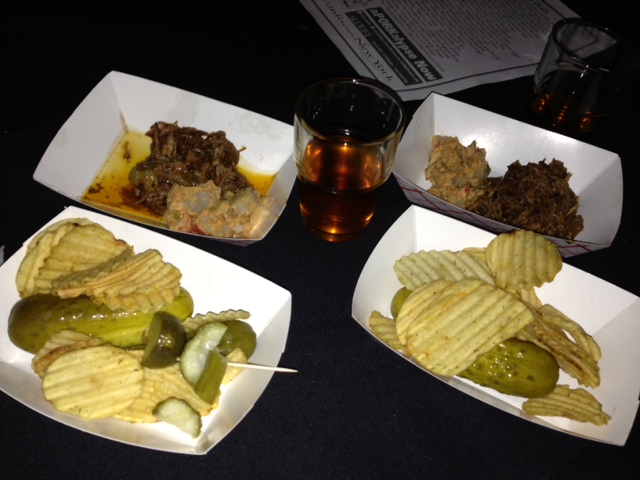 Once again my life has taken a turn for the worse: I lost my job AGAIN. Well that’s not true really. I didn’t “lose” my job…I know exactly where it is, I’m just not allowed back to it. This is the long, self-deprecating way of saying I got canned. Putting it in writing helps me recognize the harsh reality of it, or so my therapist says. My therapist also says I should do more things that make me truly happy, so here I am – eating, writing, cooking.

My first pitstop on the road to happiness was at the aPORKalypse at Alewife in LIC. Normally this would be a super easy commute, but of course the one time I travel to LIC, the 7 train isn’t working and we had to take some ass backwards way of getting there. The upside: there is pork and beer. The downside: there wasn’t enough pork. The event was pretty packed actually and there was plenty of beer to go around, but for something called the aPORKalypse I was expecting a bit more meat. Maybe my expectations were too high? I was kind of imagining pulled pork hanging from the ceilings. Oh happy day! That said, the pork that DID make it to the shindig was AWESOME. You get 6 tickets each for “tastes” and beer, and most of the stations had lines because the pork was so good. My first sighting was a giant pig head being cut and served to the hungry carnivores from Alobar restaurant. My friend Brittny ran in the other direction – her words were “I can eat it but I can’t look at it”. Well then Britt, look away…

There was also beer that was dry hopped with bacon! Who knew such a thing even existed..?

My other favorite dish of the day came in the form of pulled pork, and pickles from McClures. Have you had their spicy pickles yet? Well you need to. I crave them like a pregnant woman.

Despite the lack of pork falling from the heavens, I have to say I still left fairly full (though I had my fair share of beer), and when Dara’s full, Dara’s happy.

Here’s to happiness and moving forward.