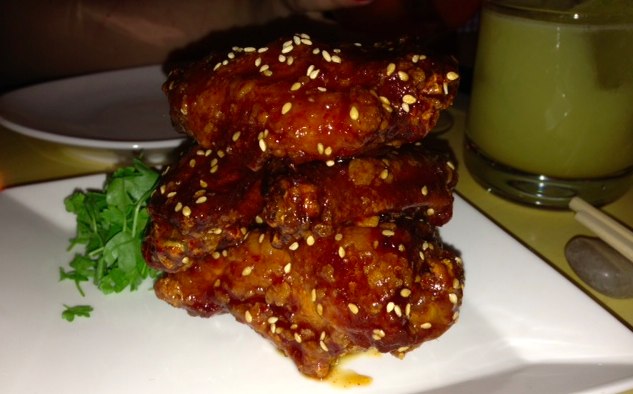 My mouth has finally cooled down from my meal at Danji in Hell’s Kitchen last night. If I could describe this place in one word it would be: pepper. Lots and lots of pepper.

Danji is a Korean tapas-style spot on 52nd between 8th and 9th (perhaps hoping to pick up some of the hungry and stranded Totto Ramen crowd?), and it was good, but it wasn’t great. As I mentioned, everything kind of tasted like pepper, and some of the dishes were so overly seasoned they almost tasted the same. One thing I thought was cool though – the way they store the menus underneath the communal tables in little drawers. Neat!

Since Danji operates on the theme of small plates, they recommend 2-3 plates per person. Hooray! Fortunately, the menu isn’t overwhelming (ahem Xixa), so it was fairly easy to pick out a few dishes. We started with the garlic honey wings w sesame seeds. YUM. I took one bite and said “this is every flavor I love in asian cooking, in one chicken wing”. They were sweet, a little spicy, and had great crunch on the skin. I could eat a variety of wings every day, but if I did I’d like these to be included. Get these.

Danji brings your plates out one at a time, which is actually kind of nice, especially when you’re sitting at communal tables. So next out was our Bulgogi beef sliders. Bulgogi is a Korean BBQ beef that’s usually seasoned with soy sauce, garlic, sugar, pepper, and chili flakes. Obviously there are variations on this, and Danji’s version uses a shit ton of black pepper. I bit into one and my eyes almost popped out of my head. Alexis couldn’t even eat hers because they were so spicy. I ate them (because I’m fat) but I didn’t love them. Too much pepper.

And continuing in this tradition was the vermicelli noodles with beef and Korean peppers. AH MORE PEPPER! Well, honestly, the noodles were good, but after a few bites it legit tasted like the sliders – it all kind of mushed together in my mouth and the only taste I could really decipher again was the black pepper. Disappointing.

Lastly, whenever I see something with a fried egg on top, I order it. Flip flop with fried egg on top? Yes. I will take that. So when I saw kimchi bacon chorizo “paella” for 2…I knew I had to have it. The fried egg on top is an additional $2, but whatever it’s always worth it. GO WITH THE EGG MY FRIENDS. Especially in rice and noodle dishes, it melts in and just creates this creamy texture you can’t duplicate. Anyway. Did I mention this had bacon in it too?? I wanted to love it, I really did, but again, it was a bit sour (I guess that’s the kimchee), and I just didn’t feel like the flavors worked all that well together. It was also pretty spicy, but not from black pepper – this was a different kind of spicy – think heat from chili flakes in this one.

Being that I have heard a ton of great things about Danji, I was a bit surprised by the food. But hey, to each their own right? And if you want to clear out your sinuses, I think this would be a great place to do that.