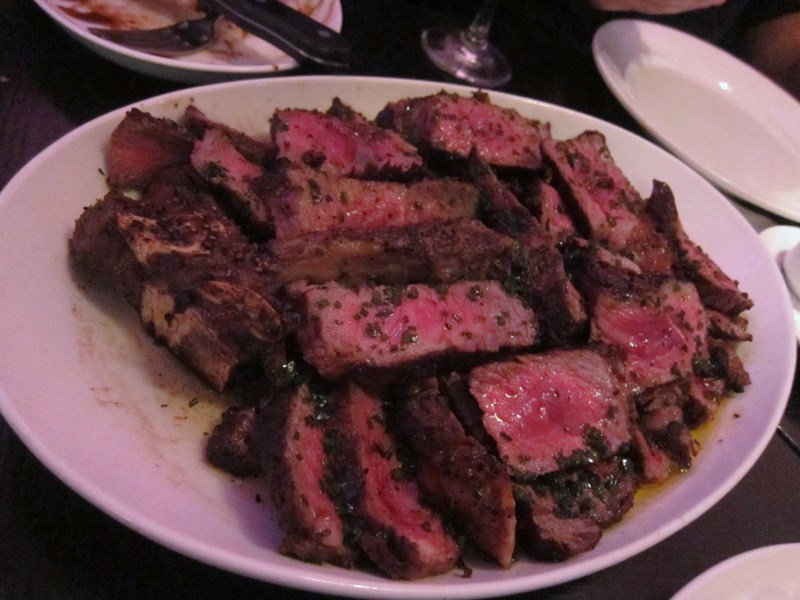 Perhaps the term fine dining loses some of it’s meaning when the restaurant in question shares space with a strip club…or you just need to be a little more open minded. I had the opportunity last week to review Prime 333, the steakhouse inside Sapphire’s Gentleman’s Club on the Upper East Side, and I have to say…pleasantly surprised. And that’s being modest. It was actually great food and an awesome time – steak, booze and boobs – how can you go wrong with that triple threat punch to the senses?

So let me paint you a picture: the restaurant is separate from the club, so if you’re picturing a pole next to your porterhouse, then you are mistaken…though you have a naughty mind and a flowing imagination. Good for you. Anyway, the restaurant is plush and comfortable (though it borders on sparkly at times – it IS in fact, in a strip club), and the staff is incredibly friendly. My friend Andrew from GFQ Network and his wife Jess set me up with this dinner, and I brought my fellow fatty Tom as well. Four people. Four appetizers. One massive Porterhouse. Three sides. ALL the potatoes. And three desserts. AND A PARTRIDGE IN A FUCKING PEAR TREE. Nobody needs that much food but this is America – we like to live in excess. And speaking of excess..Sapphire makes a dangerous dirty martini. I had about…four of these…

Let me give you the rundown of the food. Literally everything was great, but there are some favorites, as always. Shrimp cocktail for example – have you ever had shrimp cocktail in a steakhouse? I sometimes question if they pump these things with HGH before they serve them because they’re so big and MEATY. I could eat that shrimp cocktail for days.

Sizzling Canadian bacon. Duh. Just…DUH. If you don’t get this, you’re probably not my target audience so just get off my blog. Now. Thick slabs of Canadian bacon grilled up to charcoaled and crispy perfection. Don’t. Mind. If. I. Do. Hamachi. Yea that’s right – I got sushi-grade hamachi in this place – and it was delicious. Really fresh hamachi topped with sliced jalapenos and a light drizzle of soy sauce makes it a nice and light appetizer, which is the exact opposite of everything else you will be eating here.

Let’s talk meat. Porterhouse steak for four, to be exact. Do you know what that amount of steak looks like coming towards you on a platter? I think it looks like a gift, actually. I had at least four or five slices, and they were perfectly medium rare, tender, and flavorful. A good porterhouse doesn’t really need anything besides a little s&p, but the house steak sauce was a welcome accompaniment. Carnivores, brace yourselves.

ALL THE POTATOES. In my order of preference: potatoes au gratin, roasted garlic mashed potatoes, sweet potato fries. The gratin is just always my favorite – and it’s another thing I find that steakhouses do amazingly well. I have never met a steakhouse au gratin dish that I disliked. This one was buttery, cheesy, and crusty on top – the one instance where the word crusty is a pro and not a con..

I suppose the one thing we’re missing here is vegetables, but don’t worry, we made sure to get our extra dose of iron in the form of creamed spinach, and some Vitamin D via the sauteed wild mushrooms. I was so full at this point, I was running on sheer desire; I wanted it, but I wasn’t sure if I could take it. Isn’t that the idea of strip clubs anyway? To see how much you can handle before exploding..?

In case we didn’t go HAM already on the main courses, we had to cap off the meal with not one, but THREE desserts: creme brulee, chocolate lava cake, and cheesecake. What a bunch of happy fatties we were. The cheesecake didn’t thrill me, but then again I am partial to my moms cheesecake, and you would really have to screw up a lava cake for me to not enjoy it. Chocolate = love. The creme brulee was very good though, and despite our “fullness” we devoured that pretty quickly.

After a very indulgent meal, it was only necessary that we make our way into the actual club for some eye candy and lap dances. I mean..when in Rome, AMIRITE?! But in all seriousness, if you’re the open minded type, I think this place is worth checking out with either a group of friends or a very cool significant other. And if you go with the latter, you’re pretty much guaranteed to get laid – it’s pretty hard to walk out of there not thinking about sex. Just sayin. Steak & sex: the American dream. And these guys nailed it.