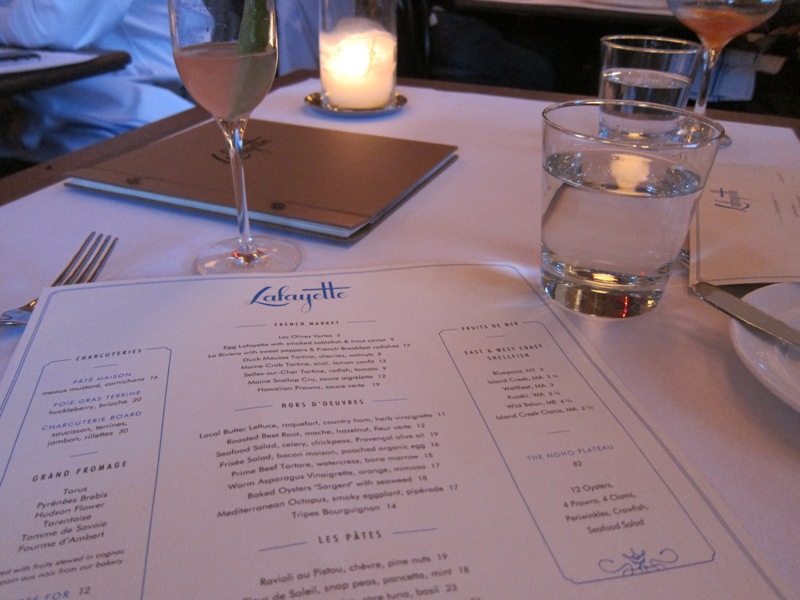 You know how they say timing is everything? That’s how I felt when I finally snagged an 8 pm reservation at Lafayette recently. I had been calling this place for a solid week and a half trying to get in, but unless I wanted to dine at 5:30 or 11:15 pm, it was proving to be damn near impossible. Granted it’s new, it’s trendy, and it’s New York – we flock to the unknown – but I imagine it’s easier to get into the Pentagon than it is to get into one of Andrew Carmellini’s restaurants these days. That said, once you’re actually inside, you’ll get what the hype is currently about, because the meal and the service was pretty great. Obviously service is not the reason we visit restaurants, but as New Yorkers it’s nice to know that there are some places, no matter how trendy, that still believe in rounding out the experience with good service.

Lafayette sits in the old Chinatown Brasserie space, which is quite large, and the interior has that Parisian bistro feel, from the dark wood floors to the red leather banquettes, and a French bakery right as you walk in doesn’t hurt their case either. As you make your way towards the bar, which will undoubtedly be crowded, you’ll take a look around the room and notice that everyone is…doing the exact same thing. I’ve never felt such a literal version of see and be seen before – perhaps they were all scanning the room for celebs? Either way, your attention will be quickly diverted to the fact that you just paid $15 for a cocktail. Was it a good cocktail? Yes. Was it worth $15? Don’t know about that. This was really the overarching theme of our meal at Lafayette: is it worth the price? And for the most part, yes it is, but certain parts were not. Fortunately I’m here to break that down a little for you.

And here’s a fun and helpful fact about Lafayette: there are saloon-style, swinging doors by the bathrooms. It’s rather an aggressive swing when pushed, so if you have to walk through there, be careful. I’m all about food to the face, but not a fan of door to the face. And yes, this almost happened to me. Live and learn, right?

Let’s talk carbs. The bread at Lafayette is delicious, and it’s the only thing that’s given gratis to the table. We’ll take it. The bakery in front is doing something right, because every piece of bread we had here was fresh and fragrant. Definitely get something with bread involved.

A recommendation from our waiter (who was awesome, by the way), the Maine Scallop Crudo is NOT to be missed. This scallop dish was perfect. So fresh and light, topped with a horseradish, lime zest and crème fraiche dressing and served on a scallop shell over ice, it was not only pretty to look at, but it was an excellent appetizer to start off with ($12). If you say you don’t like raw scallops, I’m going to have to ask you to shut up and just try this.

The crab tartine is a good example of something that was solid, but not necessarily worth $13. Two small pieces of bread each topped with a little pile of crab and a drizzle of lemony aioli; it was certainly tasty, but the bread was probably the best part.

The Prime beef tartare is a pricey hors d’oeuvre at $18, but definitely worth the splurge; tender pieces chopped up small with parsley, and finished with a dollop of poached bone marrow that you’re supposed to mix in. That part was impossible to do unfortunately, since the marrow was too hard (picture the consistency of semi-cold butter), but you can take bits of it with your knife and smear it right on top. Also, that bread again. Perfection. Meat eaters, start salivating……now.

The Fleur de Soleil pasta with snap peas, pancetta and mint was another recommendation from our waiter; we wanted to go with the Spring mushroom risotto ($24), but he said this pasta was better. Bonus points to the waiter for actually recommending a dish that’s cheaper ($18). The sunflower-shaped pasta was cooked perfectly and the sauce was creamy but not too heavy – a really nice spring dish. And pancetta never hurts either. #baconforlife.

Similar to the NoMad, we had been hearing rumblings about the roast chicken here, so we felt it was worth trying despite the $22 per person price tag. Now don’t get us wrong, this was an excellent bird, from the golden crispy skin to the juicy meat…and spooning some of the caramelized onions and roasted potatoes on top…yum. Honestly, you’ll feel like you’re at Grandma’s rather than a fancy French bistro…but Grandma doesn’t charge you $44 for her roast chicken for two. Just sayin.

Roughly translated to “home donuts”, the “Beignets Maison” were pretty good, but no match for New Orleans. If you’ve ever been to Café du Monde consider yourself both lucky and f*cked at the same time, because no other beignet will ever match up. However, the milk chocolate mousse and passionfruit butter these are served with are a nice touch.

I would definitely revisit Lafayette, maybe for my 30th birthday or something. So I guess I should probably make a reservation now.