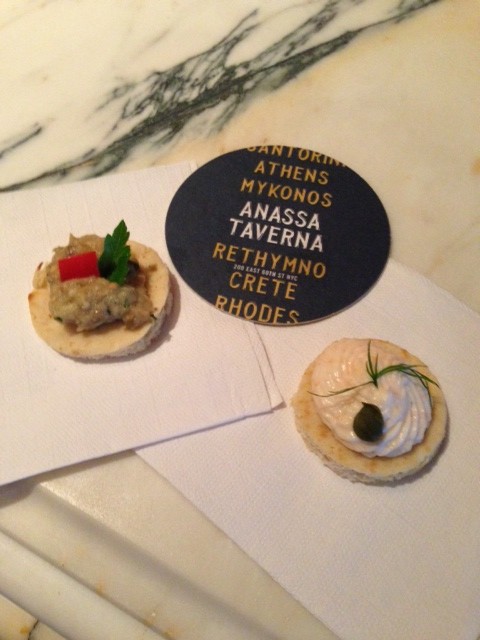 Even though I’ve been blogging and writing about food for many years now (five – holy shit), I still know where my strengths lie in terms of detecting really good food; Greek happens to be one of those foods. I mean listen, I’m half Greek and I grew up in Astoria. Throw in my trip to Greece a couple years ago and the fact that I used to cruise up and down Franny Lew for fun puts me in the upper echelons of Greek food snobbery. But I digress.

I visited the opening of Anassa Taverna a few weeks ago, and despite the fact that it felt a little like midnight in Mykonos (i.e. clubby), the place is beautiful, and the little bit of food I tried was good, so I thought I’d go back and get the full dining experience. There are pros, there are cons, but the main thing I’d like you to take away here is that the food is GOOD. Like, very good. Not quite Astoria-status, but it’s close.

First problem of the evening: 7:30 pm reservation, not being sat until 8 pm. The owner/manager knew I was going to review the place, and making us wait half an hour is not a good look. Even if I wasn’t reviewing it, waiting a half an hour when you HAVE a reservation is problematic, I’m sorry. He was apologetic and comped our drinks we had while we were waiting, so he made up for the faux pas as best he could, but it’s still something that really shouldn’t happen. At the end of the day, I’m all about the food, and fortunately they don’t miss many marks there so it was worth the wait.

Once seated, the very friendly waitress took our orders and recommended a few things as well. We started out with the staples, so I could get a good feel for the place: greek salad, assorted Mediterranean spreads, and spanakopita (spinach pie wrapped in phyllo dough aka my favorite thing in the world). The greek salad was great; nice big chunks of creamy feta, red onion, ripe tomatoes, cucumbers, peppers, and olives dressed lightly in olive oil, vinegar, and oregano. Refreshing, clean, and light; just the way it should be. Definitely get this to start your meal.

To be honest with you, I could have made a meal out of the salad and the spreads. I say it every time. One day I might be a rebel and do just that. But I digress again. With the spreads you get your choice of three from the following: tzatziki, taramosalata (fish roe), tirokafteri (spicy feta and red pepper), skordalia (garlic whipped potatoes), eggplant, and fava bean puree. I always go with the first three – if you’re a newbie to Greek food I don’t recommend taramosalata or skordalia. Tarama (for short) can be a little fishy, and skordalia is loaded with garlic, so if you’re on a date you’ll be dealing with some kickin’ breath after. Not sexy. All of their dips were good, except I didn’t get the tarama. Sad face. They messed up the order and gave us the eggplant instead, which was still delicious so it worked out well for everyone, and the pita was warm and fluffy. I wanted to wrap myself in it and take a nap. Note: the tirokafteri was VERY spicy. I choked a little on it. You’ve been warned.

SPANAKOPITA!! Shout it from the rooftops, friends, because this one is GREAT. It’s not a traditional looking spinach pie, but it’s just as good when you put it all together…in your mouth. On the plate it looks a little weird, but I promise the phyllo dough is almost eggroll-like in texture, and the spinach/feta mixture inside is perfect. We devoured this in about 5 minutes.

Shockingly enough, a lot of the entrees didn’t appeal to me, but I saw that they had shrimp saganaki on the appetizer menu. I am OBSESSED with that dish and can’t find it everywhere, so I just ordered that as my entree with a side of broccoli rabe sauteed with feta. Greek spin on broccoli rabe: good idea in theory, not great in real life. It lacked salt and seasoning, which is surprising because feta is a salty cheese. Weird. The shrimp though? Delicious. Perfectly cooked, simmered in a savory tomato and feta cheese sauce, and no heads! OHHHH heaven. Dunked some of the pita in there and I was one Skinny Pig in shit.

The other entree we tried was the special of the day (for Tuesday) which is a roast pork shoulder wrapped in parchment paper and served with lemon potatoes. LEMON POTATOES. Do you know how much I love those?! Well let me tell you. So much, that I get them in every single Greek restaurant and almost always get an order to go too. Judge me all you want. Anassa Taverna’s lemon potatoes are spot on – maybeeee could have used a little more lemon, but I like a lot of lemon in my Greek food. If my face doesn’t look like Renee Zellweger’s after I’m done with a meal, it’s not up to standards. The roast pork was falling off the bone and seasoned really well – I’d recommend this for sure if you go on a Tuesday. I even think they should add it to the regular menu.

Even though we were stuffed like lambs (bad joke attempt), I still had to try the baklava for dessert. Baklava is a mixture of walnuts, cinnamon and honey, layered between a ton of phyllo dough, and drizzled with more honey-cinnamon simple syrup. It’s sugar shock, but it’s good when done right. This one was very good, but definitely not the best one I’ve had. They serve it with ice cream though, which is an interesting touch – most places serve it plain.

Unfortunately I have to end this on a slightly bitter note. I had a decent amount of food left over, and asked them to wrap it up for me to take home, and I never got my food. This makes the Skinny Pig sad inside. Did I NEED the food? No. But when do I ever NEED extra food?? The heart wants what it wants. And in my case, my heart runs through my stomach.

I’ll be back though, Anassa Taverna. So be on the lookout!