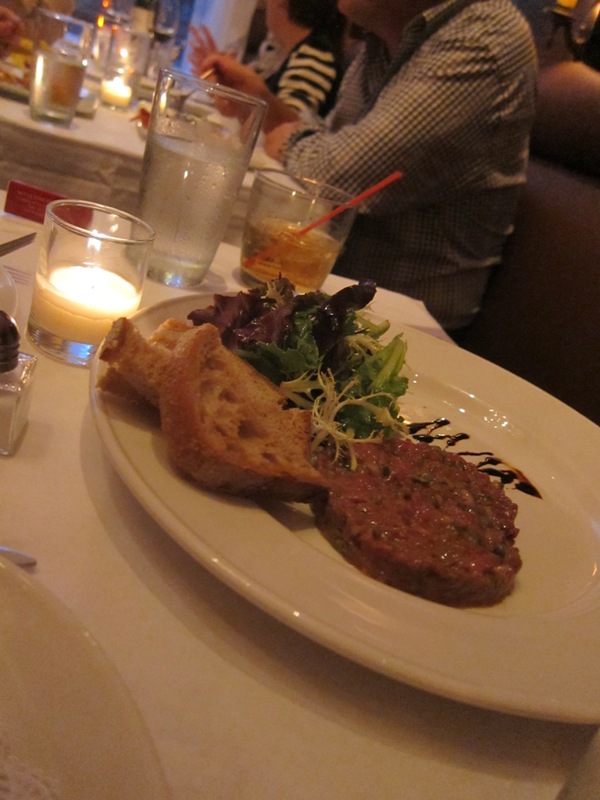 Oh, Upper East Side. You have so much potential in the food world, yet you seem to fall short almost every time. It’s not bad food, but it’s not amazing food either. I had attended the grand opening of Brasserie Cognac East a few weeks ago, and I had a really good time, therefore pretty high hopes for the actual meal. Let’s just say that it hasn’t quite changed my opinion of UES restaurants in general, and I was really hoping that it would. Let’s start out from the beginning… Service. Ok, I am not a big stickler with service, I think it can certainly elevate the dining experience when it’s great, but it’s not the utmost important thing. That said, if the service is lackluster, it can make an otherwise decent experience not so enjoyable. The people at Cognac East were all very nice, but they weren’t present when they needed to be. The hostess desk at the front was so crammed with people, we just stood there for a while before anyone even acknowledged us. Then when we were finally seated, we waited a solid ten minutes before someone even showed up with water. Gave me a good amount of time to peruse the menu, but that’s a bit much. Then when we ordered drinks, one was wrong, so we sent it back and it still came back wrong. Hmm. Not the best way to start, but still, my focus is the food so we forgot about it and moved on..

There were a lot of appetizers on this menu that sounded tempting, so we got a nice sampling: basket of fried calamari, filet mignon tartare, and crab and avocado “cocktail”. In order of favorite to least favorite it would go exactly in that order. The fried calamari was delicious – you would think it’s a hard thing to screw up at this point – but still, many places manage to give you rubbery rings of crap dusted with cornmeal. These were fried just right, plump, and the cocktail sauce/tartar sauce was tasty too. A+ calamari.

The beef tartare was pretty solid, but not as good as others I’ve tried recently. The consistency was a little mushy, but the taste was good. If you’re not a big texture person (I’m not), you would probably really enjoy it. The salad and balsamic reduction was a nice, clean accompaniment too. B+ on the beef tartare.

The crab and avocado cocktail was served in a martini glass (get it? cocktail?), and had really nice pieces of jumbo lump crab, but it was basically smothered in guacamole. Not actual guacamole, mind you, but it was the same consistency and just too much of a good thing. If it were pieces of fresh avocado, it would be awesome, but the avocado concoction drowned the dish and subsequently, the crab too. Poor little guys never saw it coming. C+ on the crab/avocado cocktail.

Being that this is a French restaurant, I felt I had to go with something traditionally French as my main course: beef bourguignon. Now I am pretty picky with this one, because I happen to make a really great beef bourguignon; it’s Julia Child’s recipe, and it is FANTASTIC. Brasserie Cognac’s version is really good, but I still think mine is better. Sorry – the one thing I felt it was missing was some chunks of bacon! Most classic versions of this recipe require bacon/lardons, and I didn’t find any in there and believe me, I looked. The beef was very tender though, and the sauce was the right consistency – not too thick, not too thin. It’s not a dish you want to eat in the summer really, because it’s very heavy, but it IS tasty. I’ll give them an A- on the beef bourguignon. Good mashed potatoes too, which is what I serve mine with as well.

The scallops were the under achiever of the meal. The description of these is mouthwatering: gently seared, pumpkin puree, wild mushrooms, watercress, chardonnay sauce and amaretto reduction. The actual dish though, not so hot. Literally. Had they been hot or at least warm, they might have been a lot better. I thought the taste was pretty good, but they were definitely not hot enough. Now I’m not a scallop expert, but my fat friend Tom is, so I trust his opinion on these things – he said the scallop was a bit overcooked. Disappointing for sure, because I think it has the elements of a good dish, they just need to crank up the heat! B- on the scallops.

Between the fried calamari and the mashed potatoes/beef overload, I was pretty full so I had to skip dessert. I wish I had tried the chocolate mousse though, because I feel thats another inherently French dish that should round out a meal like this. If they step up their game in the service department and tweak a few things on the menu, I think the place could have some fighting power with the younger, trendy crowd. In the meantime, the place was bumping with the older UES crowd, so I’m sure they’re not hurting for business regardless.