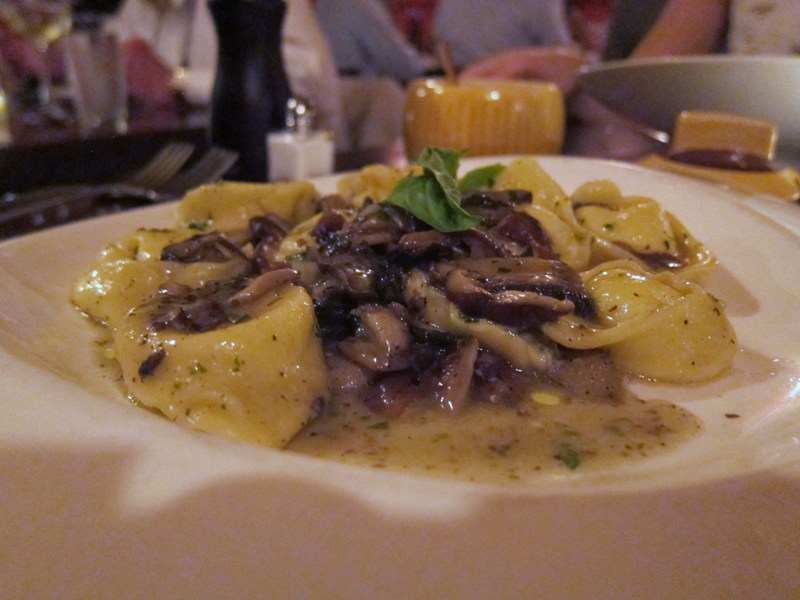 Have you ever stumbled upon a restaurant on a really quintessential New York City block and think “wow, HOW have I never seen this place before? It’s so cute!”? Well, that happened to me recently when I was approaching Gradisca ristorante in the West Village. There’s good news and there’s bad news though. The good news: it really is a nice place. The bad news: it tries way too hard. Some of the dishes were good (namely the pasta), but the others were just reaching way too high and falling pretty flat. Gradisca has potential if it just sticks to what it’s good at; I would absolutely recommend it for a nice bowl of pasta and a glass of wine.

Here’s another solid tip – this place gets loud. I don’t really know why, because it’s not super small or anything, but it was loud. One table behind us deserved to be physically removed from the place, but whatever they seemed to be enjoying themselves. Anyway, the service was great – the waitress/hostess was kind and very helpful with the menu. She recommended a few appetizers and entrees for us to try, and who are we to turn that down?

Let’s start with the best and run down the list to the worst, yes? Mind you, nothing here is terrible, but the flavor combinations on some things were just too strange even for me – they just didn’t work. What DOES work? Wagyu beef filet carpaccio with black truffle cream sauce. Ok. Yes. This is something I could eat every day. The salty and tender beef paired with the earthy, fragrant truffle cream…delicious. You won’t eat regular carpaccio again.

Another job well done in the raw department would be the yellowfin tuna tartar with balsamic shallot compote. The tuna was nice and fresh, and the sweet, tangy balsamic shallots were a welcome accompaniment. So far so good, I thought…

The next carpaccio was a little bit of a foreshadowing for the rest of the meal: strange pairings. Halibut carpaccio with arugula pesto and soft stracchino cheese. They should have stopped at pesto. Cheese? With fish carpaccio?? I don’t know, call me a purist, but I don’t think adding cheese to raw fish is a good idea. The components, separately, tasted good – but combined, it doesn’t really work. So I ate the cheese by itself, and ate the carpaccio and the pesto together. A girl’s gotta eat, right? So I had to be resourceful.

Fortunately we have pasta to discuss, and there ain’t nothing wrong with their pasta game! The mezzi paccheri pasta with guanciale (bacon), balsamic cream sauce and pecorino cheese was savory and perfectly balanced. The pasta was cooked a touch too al dente for me, but it was still very good. The BEST one though was the stracchino cheese chive tortelli with sauteed wild mushrooms and butter. DEAR. GOD. You need to get this. There’s nothing else I can say. If you aren’t lactose intolerant, allergic to mushrooms, or just plain insane, you need to get this pasta. We couldn’t stop eating it.

Sadly, we are back to weirdness, aka the entrees. Oh, Gradisca, stop being adventurous! You have the tools! You’re just mixing them up and putting them in the wrong place! Case in point: seared yellowfin tuna, burrata cheese (again with the fish & cheese!), and thyme hummus. I mean…you can kind of read in the description that this dish is all kinds of schizo. The fish was on the bland side to begin with, then you add the cheese, and the hummus…I can’t. I’m sorry but the only place where I can see mixing fish and cheese is on a Fish Filet sandwich from McDonalds. This just didn’t work for me on any level.

Another entree fail comes in the form of seared veal tenderloin with peaches, parmigiano cheese sauce and string beans. Again, all things that are fine on their own, but together, didn’t really work. I wanted it to, but it just didn’t. The veal was not cooked well – it was a little tough and had too much sauce on it. Believe it or not I think my favorite part of that dish was the peaches.

At this point I was happy I had filled myself up with pasta, but embracing my inner fat kid, I had two desserts anyway. Bottom line: one of them was good, the other was not. The tiramisu had good flavor but was super mushy and lacked texture – I wouldn’t get that again. The semifredo with honey nut brittle and hazelnut sauce was good though; if you’re going to stay for dessert, have this be your choice. I didn’t try anything chocolate but that would have been an idea too. It’s hard to screw up chocolate. Though I also thought it was hard to screw up carpaccio.

Get it together, Gradisca. You have potential! And that potential lies in tradition, not extortion, of those poor ingredients.