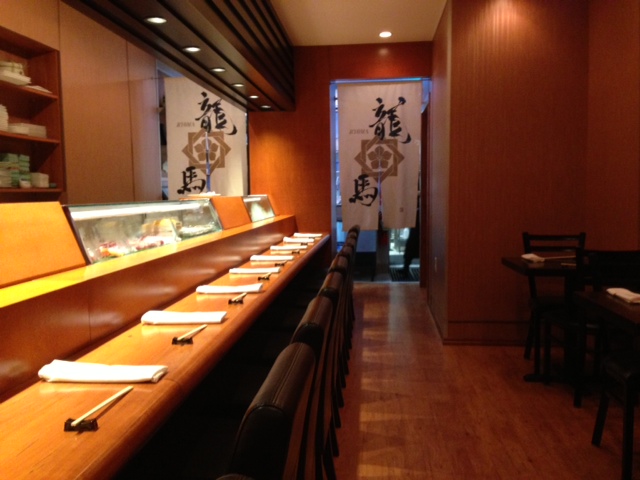 California Rolls be damned. This is not the place for you.

I visited newly opened Sushi Dojo a week or so ago and had an amazing experience; from the conversation with Chef David Bouhadana, to the Omakase tasting. Chef Bouhadana, originally from Florida, spent time studying sushi in Japan and fell in love with it; he came to NYC to pursue his dream of opening an authentic sushi restaurant, and so far so good. The small, L-shaped dining area is just big enough to be comfortable, but cozy enough to be intimate. If you really want to make the most of this experience (like I did), sit at the bar and let Chef Bouhadana guide you through the Omakase. In Japanese, Omakase means “i’ll leave it to you”, aka a Chef’s tasting, and this one is a STEAL at $45 for 10 pieces of amazingly fresh sushi (most of which is flown in from Japan). A dojo is a place where one studies or trains, and needless to say, I learned a lot about fish that night at Sushi Dojo…

Did you know that there is a similar, less fatty version of salmon out there? It’s called Tazmanian sea trout and it is delicious. Chef Bouhadana doesn’t like to serve salmon (but he will if you ask for it), because it isn’t very prevalent in Japan. We were also shown the four different cuts of tuna, which I knew existed but never saw right next to one another before. You can really see and taste the differences – it was awesome.

All of the pieces I had I enjoyed, except for Uni, which is sea urchin. I don’t know , perhaps my palate isn’t refined enough to appreciate the taste, but it was a little ocean-heavy and a little slimy. Most people refer to uni as “custard of the ocean”. I…would not. I will keep my thoughts to myself. Except for voicing it loudly on here. Dislike uni. Sorry..?

If you’re the type who digs california rolls and spicy tuna rolls (I am that type generally too, I can’t lie), then Sushi Dojo may not be for you. But if you like really awesome, simple, fresh fish served to you by a very passionate chef, then come on in! You won’t regret it.