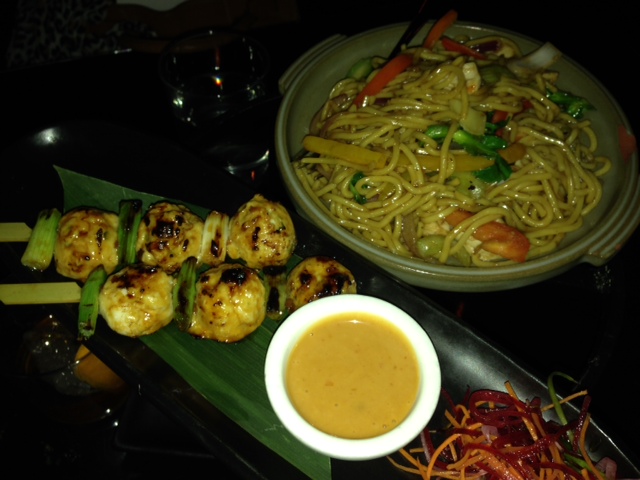 Even though the holidays are upon us (does anyone know where December went?), I thought it would be nice to squeeze in one more review before I go MIA again..

After I had a fantastic meal at La Cenita, I realized that I have yet to try The General, which is owned by the same restaurant group (EMM Group). Perusing the menu for days, I had cravings for half of the asian fusion dishes served up by Top Chef Season 3 winner, Hung Huynh. The space is larger than I expected for the area it’s in (Bowery btwn Prince and Spring), but it was warm and inviting on that cold, COLD day. You know what else will heat you right up on a cold day? A cocktail made with sriracha. As most of you know, sriracha is probably one of my favorite condiments – I put it on practically everything. When I heard there was going to be a discontinuation/shortage I considered opening up a Costco card just to buy cases of it in bulk. But I digress. This cocktail was AMAZING. I would have it every day if that didn’t mean I was bordering on alcoholism. A must-try if you like spicy drinks.

The General serves most of their food like Asian tapas – relatively small, and they recommend sharing a multitude of plates. Words to my ears. We started with the Mercy roll (spicy tuna, jalapeno salt, salsa verde), which was delicious. I love spicy tuna to begin with, but the salsa verde for dipping as opposed to soy sauce was a nice touch. A lot of the rolls sounded good, but we wanted to get a good sampling of the menu so we moved on to bigger and better things…

Enter the crunchy rice cakes with tuna tartare and wasabi tobiko. OH SWEET HEAVEN. These were delicious with the little cylinder of tuna on top and the crunchy, slightly sweet and slightly sticky rice cakes…I had to Instagram them immediately. Isn’t that the mark of good food these days? Take obsessive pictures and hashtag the shit out of them? Well I did that and let’s just say they can be summed up with the following: #NOM #amazing #delicious #fresh #mustorderagain. No shame in that game.

Does no one remember that song? Barenaked ladies? Oh well anyway – it was the first thing that came to mind when I ordered the Chinese Chicken Tacos. I’m weird. The tacos came with three small pieces, which is a little annoying when you’re only two people, but I also didn’t feel it was annoying enough to add on one more for $2-3. These were really good – I liked the textures that play off each other and the subtle, smoky-sweet flavor of the chicken.

If you have never been to a Robata grill before, first and foremost I recommend trying it out. It’s a Japanese style of slow-grilling over hot charcoals and then served up immediately, sometimes at your own table. It’s usually delicious, so I felt we should try something from The General’s robata menu – honestly this entire menu was killer which made it hard to choose – but we went with the Thai Chicken Meatball with Thai peanut sauce for dipping. Nothing outstanding here, but it was a good bet for someone with maybe a less adventurous palate. Can’t go wrong with a meatball, amirite?!

Ahhh Lo Mein for the table. What can I really say here? Lo mein is my kryptonite. Seriously I used to eat it once a week until I realized the destruction it was doing to my body, inside and out. TMI, I know. That said, now the best thing is that I can enjoy it in moderation, and when I DO have it, it’s like a special treat. And that’s exactly what this was: just greasy enough, with a bunch of vegetables and perfectly satisfying. What’s better than a hot bowl of noodles on a cold night? Also note that if lo mein isn’t your thing, the waiter highly recommended the fried rice too. Next time…

Vegetable roll for the table. If you want to have another side to share while also keeping it on the light side (not something I normally do), this would be a good option. Assorted steamed veggies rolled into rice and soy paper with a honey mustard demi-glace for dipping. Again, I’m SURE the fried rice is the more tasty option here, but when you hear about our dessert you’ll understand why we were glad we kept this one.

So here’s how I know my reputation around NYC restaurants is starting to precede me. We said “oh…no thank you…we’re going to skip dessert. We’re quite full”. And guess what happened? The waiter brings over dessert anyway. COMPLETE DISREGARD FOR OUR WISHES. That said…I WISH I had shut the F up and had the brains to order this on my own. It was a large green tea donut (who knew?), perfect for sharing, filled with green tea mascarpone cream (amazing), lemon honeycomb on the side (with an actual honeycomb) and topped with green tea ice cream. I know it sounds like a lot of the same flavor, but it’s not at all. The soft, sticky donut with that amazing creamy filling, drizzled with honey and ice cream…ohhhh my god. I was just as amazed with the dessert at La Cenita, so I’m starting to think the EMM Group really knows their shit when it comes to sweets. No complaints from me and I’m so glad I was forcefed this donut.

199 Bowery (btwn Spring and Prince)