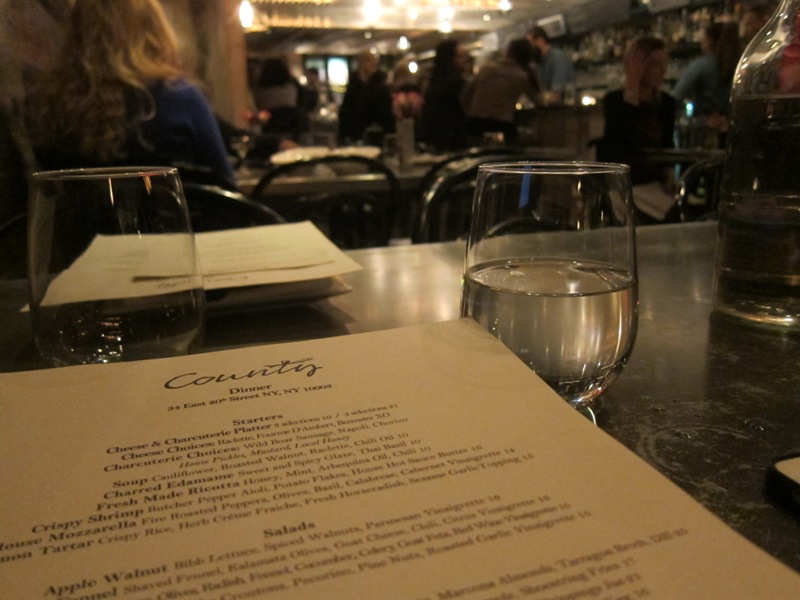 I wish I had something witty and smart to say about County, but there’s really not much to say except that it’s a great place with awesome food. Sometimes being honest is the way to go…it is, after all, the best policy. HA. I can avoid witty but I can’t avoid corny.

I suppose if I had to pick one downside to County, it would be the communal tables in the back. I heard they might be swapping these out for standard 4-person tables, but currently, if you don’t take one of the small two-top tables, you’re going to be sitting next to strangers. Not always a bad thing, but this is New York – we don’t even like half of the people we see every day. That just me? Oops. Anyway moving on to the drinks and food..

During this time of BITTER ARCTIC BULLSHIT, I decided to warm up with a nice glass of…Penicillin. Ok not really, because I am allergic to that, but this was the name of the drink. Scotch, lemon, honey, and ginger. Sounds soothing, doesn’t it? And it was nice and strong, just the way I like my “medicine”. If all Penicillin tasted like this (and didn’t give me hives), I’d probably enjoy being sick more often.

County has one of those menus that makes everything sound good – I seriously could have eaten every appetizer. Every. One. But since we had to save some room for entrees, we opted for the house made ricotta, the crispy shrimp, and the cauliflower soup. The fresh made ricotta with honey, mint, olive oil and chili flakes might be one of the best cheeses I’ve ever had; so creamy, it tasted like whipped butter. The mint is not something I’d normally be a fan of, but everything just WORKED. I loved it. Served with crusty bread, this could be a meal on it’s own.

I’m not sure exactly what was going on in the crispy shrimp, but I dug it. Crispy is an understatement – this whole dish was like a crunchfest in my mouth, and I didn’t hate it. A few pieces of large shrimp are coated in batter, deep fried, and then tossed together with potato flakes (yes thats a thing at County and it’s wonderful), lemon aioli, and hot sauce butter. You know you salivated reading that description.

The cauliflower soup was wonderfully simple and pureed to perfection. The one thing that bugged me about the soup was that there were little slivers of red chilis in there, and every now and then you would bite into one and feel your sinuses fall out. Other than that, it was tasty. I liked the walnuts and chili oil on top – took an otherwise one-note soup up a couple levels.

When I saw cavatelli on the menu, I had to get it – it’s one of my favorite pastas. County’s version was mixed with pork ragu (could have easily stopped there), braised kale, lemon breadcrumbs, and a dollop of fresh ricotta. So, so good. So refreshing too, for something that was kind of heavy. I’ll attribute that to the lemon and the kale; if you add kale to things it automatically makes it good for you. At least that’s what I like to tell myself.

You know what else is good for you? Adding bacon to things. Bacon + brussels sprouts = match made in heaven. I’m so glad someone came up with this idea, because I don’t think I would have touched those mini green footballs otherwise. That said, I’ve really come around on brussels sprouts, and County did them up right with bacon and a pickled onion vinaigrette. Mmmm. The smell of bacon lingered over our table for the rest of the meal too, which made me very happy.

When I asked about the most ordered item at County thus far, I was told it was the pan roasted chicken. I have been around in this scene long enough to know that the “roast chicken” is usually not the go-to, so when someone tells you that it is, you get it. And you usually don’t regret it. Such was the case here too. The super crispy exterior was what did it for me, but the meat was good too, and it sat on top of garlic mashed potatoes and collard greens. I can’t hate on that. A few of the thin pieces were a bit dry, but it was overall very good. Quite a large portion too – I could barely finish it.

Just enough room for dessert at this point! We had the caramel bread pudding with shaved almonds, powdered sugar, and ice cream. It was everything I like bread pudding to be: warm, sweet, and delicious. It’s one of those amazing and comforting winter desserts that you want to cradle in your stomach and then fall asleep immediately after devouring it. Again, these might be problems only I have, but if you’re eating at a place like County, I would hardly consider that a problem.