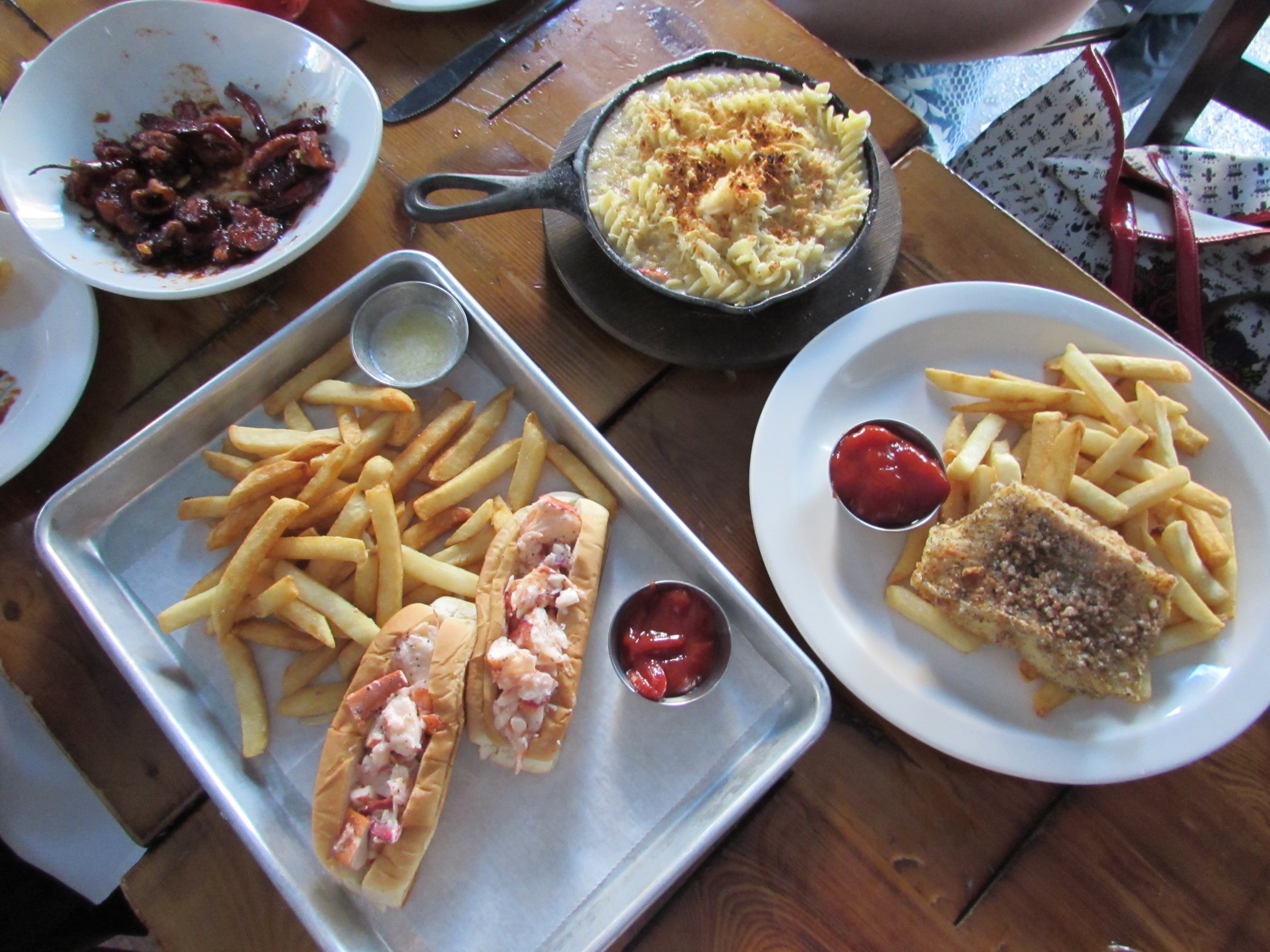 It’s World Cup time, and you know what that means…absolutely nothing! Well, to me at least. I am not a soccer fan, but I will root for the US of A in situations like this. I enjoy the camaraderie and the excuse to drink cheap beers on a Tuesday, but what I don’t enjoy are the crowds. Everywhere. I visited Bait & Hook last week to try it out over some lively conversation, and the sound of us chattering was drowned out by a bunch of boisterous soccer fans wearing flags as capes. Le sigh. What can you do. At least the food was pretty solid…

Bait & Hook is run by Chef Dave Martin, a Top Chef alum and Mac n’ Cheese Master. Ok that last one is completely fake and I made it up, but if it was real, he should get it. Just my humble opinion. I visited Dave’s old restaurant here (Meatball Factory), and despite some epic opening night blunders, he got one thing right: a killer mac and cheese. Now, he brings a slightly different version to Bait & Hook. It has lobster chunks, a creamy, perfectly cheesy sauce and a crisp, crunchy topping. Get in here and give it a hug.

I forgot to mention that Bait & Hook is a seafood bar and restaurant – though if you couldn’t pick up on that from the name, I’d judge you a little bit. Anyway. I wanted to try the fish & chips, because when you’re in a seafood restaurant, you would think that fish & chips would be a good barometer for the rest of the food. Well, the fish & chips were delicious. The crust on the cod…I don’t know what it was exactly, but it was so light and crispy, with perfectly cooked cod inside, and served with a nice pile of salt & vinegar fries. If this is your thing, go immediately. I’m sure kids would love it too.

Have you ever had calamari tossed with chiles, peanuts, and kung pao sauce? Well then you clearly haven’t had the kung pao calamari here. You need to though. It tastes like a guilty pleasure you would eat whilst curled up on your couch watching bad tv. Can you think of a more enticing way to describe a plate of food? I can’t. And I won’t.

Sadly, one thing here fell kind of flat – and I was a bit surprised based on the rest of the food – it was the lobster rolls. Let’s break it down. Bun: good and buttery. Lobster: kind of warm and not as “meaty” as it should be. That’s it. It’s a lobster roll. If the lobster isn’t great, then it won’t be great. I also like my lobster to be VERY cold, and it was sweltering in Bait & Hook that day. Not saying that’s an excuse, because I’m sure they have refrigerators, but that would be my main gripe. It was just ok.

I’d come back to Bait & Hook, if only for a big cast iron skillet full of mac and cheese. And probably the fish & chips, which I would most likely dunk in the cheese sauce. One big happy family. Add in air conditioning and I’ll eat the rest of the menu in one sitting…