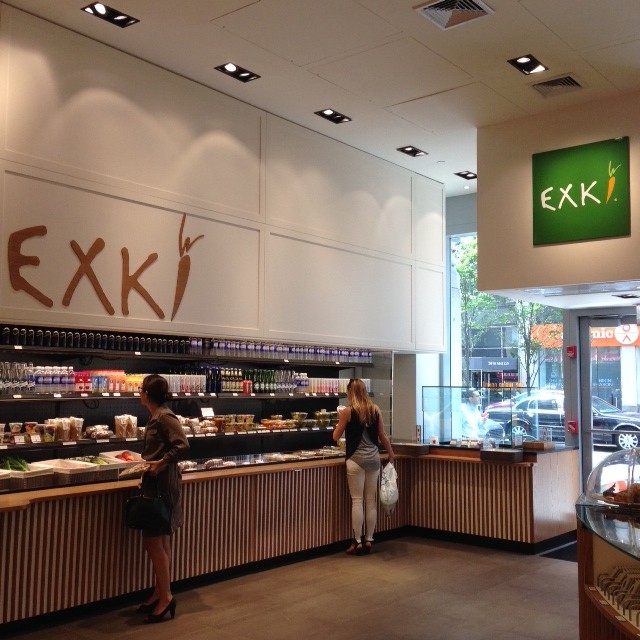 I normally don’t post about fast-casual restaurants like this, but I really liked this one! Therefore, I’m going to make it a fast-casual post. See what I did there? I get more and more clever as the years roll by…

Fact: EXKi is a healthy, fast casual restaurant that just opened on Park Ave between 20th and 21st street.

Fun Fact: EXKi is a play on the word “exquis”, which is French for “exquisite”

Fact: EXKi is a certified “Green” restaurant – no plastic here!

Fun Fact: If you go to their website and check out the menu, you’ll see the stories behind the names of the foods! I learned quite a bit about their sandwiches today…

Fact: Sandwiches are delicious and a classic lunch food. I tried the Vermont Yard, which is a gorgeous blend of edamame hummus, creamy Vermont goat cheese (hence the name!), organic mesclun greens, and honey on multigrain ciabatta. So filling and so satisfying. Home run.

Fact: I love vegetables. I love cheese. So I LOVED the oven roasted hot dish called “In the Now”. My favorite root veggies, garlic, tomato, onion and swiss cheese, baked together into a delightful little parchment-lined dish. Another fact: it doesn’t have to be winter to enjoy hot veggies.

Fact: I also love pasta. EXKi has these little “Duo Salads” that you grab, shake around to mix together, and eat. I tried the Summer Mix, which was penne pasta, red pepper emulsion, kale, artichoke, sundried tomato, mozzarella, and pesto. Perfect portion size too!

Fun Fact: EXKi has little bottles of salad dressing they sell, and they’re too damn cute.

Fact: Belgium is also known for their chocolate, and EXKi has a selection of desserts as well ranging from classic tarte tatin, to chocolate bundt cake.

Fun Fact: Dr. Evil is from Belgium too. And the Austin Powers movies are hilarious, so that’s another reason you should check it out.