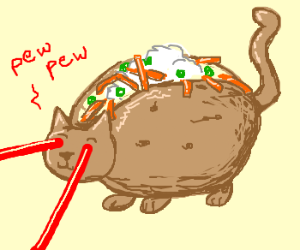 So. Tonight was a low one. I had chicken soup and a baked potato topped with guacamole for dinner. Underseasoned guacamole, I might add. I didn’t take a pic because it looked like the Grinch barfed all over my plate (so instead I posted that pic above of a cat/baked potato hybrid with death ray laser beams coming out of it’s eyes). It could have been worse, but it also could have been a juicy burger topped with blue cheese and bacon. *wishes on a star*

So…yea. I have four weeks left and I’m already losing my shit.

However, the silver lining came in the form of a packaged dessert. I had some rice pudding that I ordered from Fresh Direct AND GUESS WHAT? It was delicious! I mean, it was no Rice to Riches (love you guys), but it absolutely hit the spot and took care of any bland potato/guac aftertaste. It was creamy, thick (but not too thick), and just sweet enough with a touch of vanilla. Hit it with a dash of cinnamon and you’re set. I could definitely eat rice pudding every day. In this case…I kind of have to. *laughs maniacally*