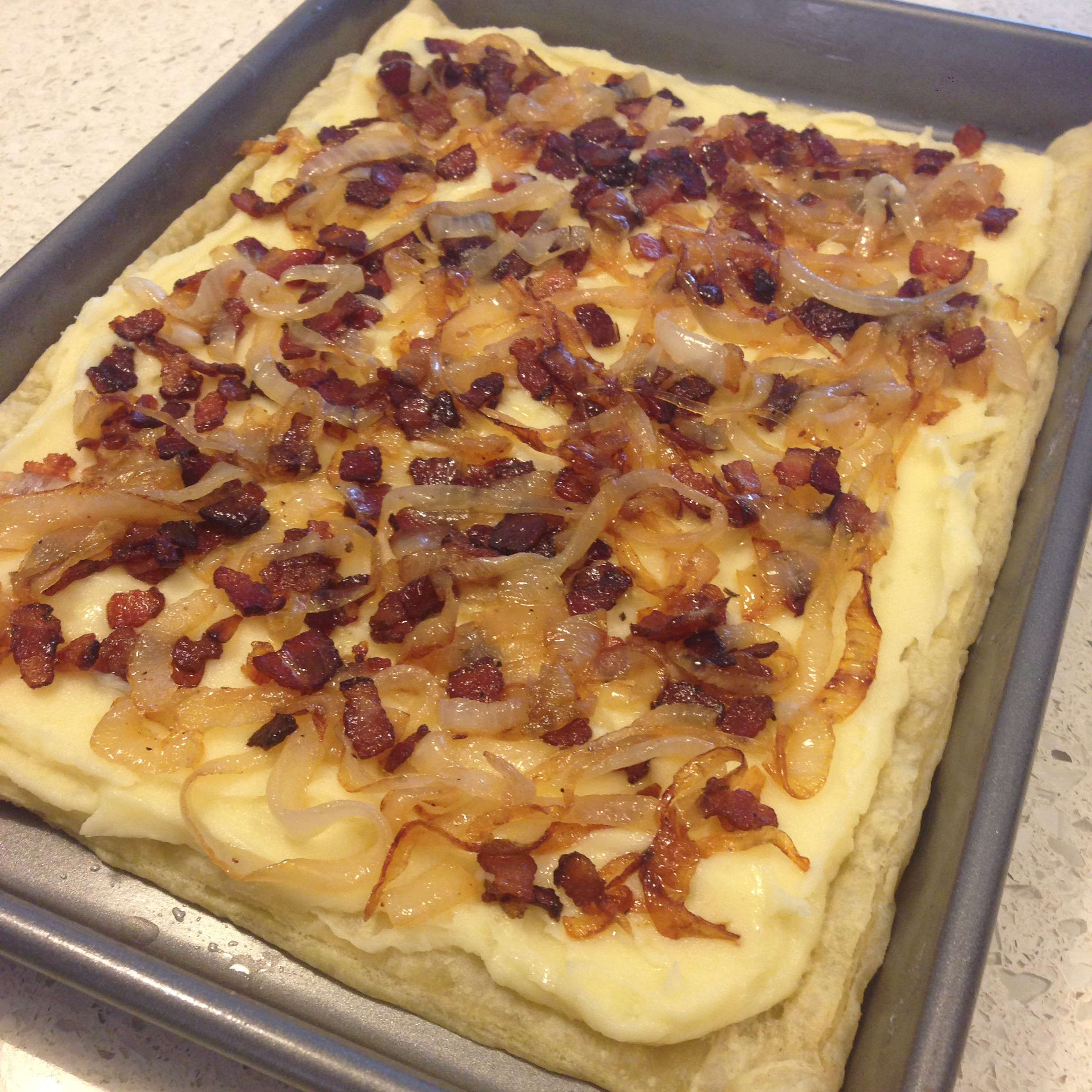 Did you actually think I was going to make it that long without finding ways to get bacon in my system? Please. This isn’t amateur hour.

So, this was inspired by my friend Kevin’s birthday. He fucking LOVES potatoes. I initially said I was going to bake a cake out of potatoes, but this was a lot easier and I had all the ingredients ready to go. Also I’ve been really excited to use my Flavorgod seasonings that came in the mail recently, so I’ve been doing more cooking. If you haven’t checked them out yet, I advise you do that – they’re great so far.

This tart is super simple to make, and it’s delicious. Would be great for entertaining, and for me, I just scraped off the top and swallowed the bacon and onions without chewing. I know, I’m a beast.

5-6 medium sized potatoes (FYI you will have some leftovers)

1. Peel and quarter potatoes. Bring to boil in a large pot. Once they are soft enough, drain them in a colander, pour back in the pot and add 1/2 cup of heavy cream or half & half, 2 tbsps butter, and 1/4 tsp of salt. Beat with a stand mixer or hand mixer. In case you haven’t figured this out yet, you’re making mashed potatoes. Set aside.

2. On medium-high heat, saute the bacon in a large pan until almost crisp. Add onion slices and cook on medium-low heat for roughly 20 minutes until they start to caramelize. Add the Flavorgod seasoning and mix around. Take a whiff. Mmmm.

3. While the bacon is cooking, you can do the puff pastry. Preheat oven to 375 degrees, and unroll the puff pastry sheet to the size of a 13×9 sheetpan. Or whatever size you have. I don’t give a fuck. Prick some holes in it to stop it from puffing up too much. It is PUFF pastry after all. Pop in the oven for 8-10 minutes, or until it’s a little puffy. You don’t want to cook it all the way because it’s going to go back in again after the toppings.

4.  Take 2 1/2 cups of the mashed potatoes and spread over the puff pastry. Add the bacon and caramelized onion mixture on top and spread around as well.

5. Pop back in the oven for another 10-15 mins until the edges start to slightly brown. The bacon will burn if you keep it in there too long also, just FYI. I happen to enjoy almost-burnt bacon, but most people don’t because they’re normal.