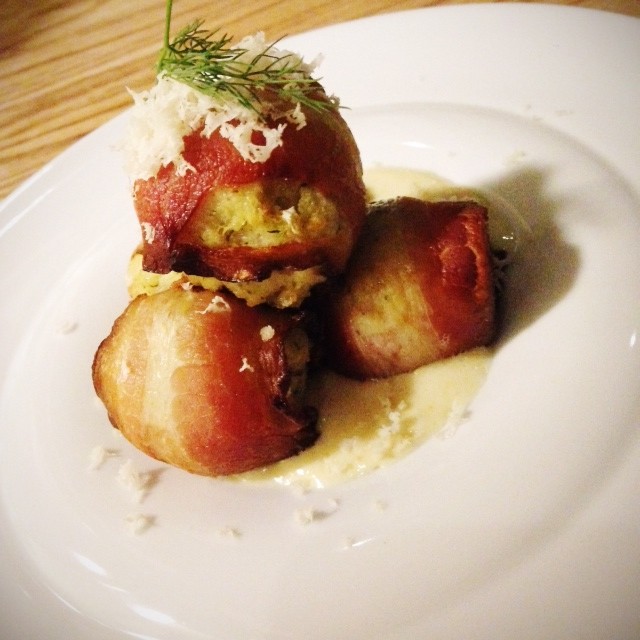 I kind of just like saying “gorbals”. Try it. It’s funny.

Also, my face is no longer broken, so I figure, go big or go home. We tried close to everything on the menu (no complaints), so this is a long review, I’m warning you.

Brought to you by Top Chef alum Ilan Hall, The Gorbals is located on the 3rd floor inside an Urban Outfitters on North 6th street in Williamsburg (how trendy). The decor is actually very nice, and you can peek down and get a birds eye view of Williamsburgers shopping for distressed denim and oversized fake glasses. I might also add that they were pumping some sweet jams in there: Mase, Biggie, Montell Jordan. That 90’s rap really tugs at my heart strings. #Queens.

I digress. For starters, we had the the rabbit & apples with smoked sauce, pickles and mustard. I’m normally not a BIG fan of rabbit but this was SO good. The wood-grilled leg was so tender, and the skin was so crispy, I was gnawing it off the bones for a while. The sauce really made it though, in my opinion. We also shared the “Morcilla” custard with uni and summer garlic aioli. Another thing I normally don’t like is uni – the “custard of the sea” as I’ve heard it been dubbed, is just too strong for me. It’s also got a very weird texture and I just don’t care for it. However, this custard (made from Morcilla, which is a type of blood sausage) was delicious, and it’s easy to avoid the uni since they just lay it on top inside the little mason jar. Think of it like pate, as it is served with buttery and crisp bread pieces. No pic, sorry.

Moving on. I believe I have made it clear that I love poutine: the Canadian triple threat of fries, cheese curds, and gravy. The Gorbals puts a very delicious twist on it with their Banh mi poutine; thrice cooked fries bathed in hoisin gravy, cheese, Vietnamese pickles, and intertwined with LOTS of pulled pork. I wasn’t expecting this one to be as good as it was, but oh man. A must order.

Now what kind of Jew would you be if you didn’t take matzoh balls and wrap them in bacon?? I guess a good one. And I’m ok with being bad sometimes. These pillowy little balls of goodness are wrapped in Nueskes bacon (which is my favorite bacon!) and sit atop horseradish mayo. NOM. I’ll be honest, not the best matzoh balls I’ve ever had, but I think this is more for the novelty and the tongue in cheek approach anyway. The poutine was still my favorite so far.

I didn’t mention that the menu at The Gorbals is split into four categories: field, barn, coop, and stream. Oh and sweets for dessert. There is ONE dish under the “coop” part and I’m thinking that’s all they need? The chicken schnitzel with toasted creme pomme puree (this is mashed potatoes), and baked cauliflower. You have never had such a crisp schnitzel in your life. Ever. The potatoes were a tad on the gluey side, but the baked cauliflower was so perfectly browned and salty that it mixed well together. I definitely recommend this as a must order as well.

There was a special last night when I was there, and it was scallops and pork belly. How can you turn that down? You can’t. Plus, the presentation was so pretty, I felt like a Mermaid finding treasure. And there is no better treasure than bacon. I will say that the pork belly was tasty, but I mostly stuck to the crisper and more well done parts. Pork belly gets a bit fatty for me at times and the texture becomes gelatinous. Not a fan.

Yes there’s still more. A lot more. I don’t know how I was still alive at this point, but I summoned the overlords of fat and with their help, I made it through to the end. We tried the “Jewish lunchbox”, which is a mixture of fried barley, poached egg, dill’d kimchi, and a gefilte fish cake. Now, I hate gefilte fish. But so far, Ilan and The Gorbals had been taking a lot of things I typically hate and turning them into things I like. So I tried it. First I should mention that your waiter presents it to you in a little tin box, and then closes it up and shakes the crap out of it. Our waiter, Mitch, did a little dance with it too. It was a treat for everyone. The gefilte fish was not fishy, and I really liked the fried barley – it was a hefty dish to have at that point in the meal though…

Onto something a bit lighter, the fried spicy shishito peppers and charred eggplant. These were good and I love shishito peppers, but they could have been a bit saltier. My favorite shishitos are from Ippudo, and these fell just a bit short in comparison. Also, I would skip the pumpkin risotto. It’s not actually rice. It’s pumpkin seeds. JUST pumpkin seeds. It has a nice, creamy taste, but when you’re expecting carbs and you don’t get them it’s kind of upsetting.

FINALLY time for dessert. The brownie with vidalia onion caramel (bear with me), candied onions, and charred scallion ice cream was actually really good. I mean, if you don’t like onions I wouldn’t recommend it. You can taste it in the caramel, and the candied onions were sweet and smoky. The brownie could have been a bit more moist, but overall a very interesting dessert.

Also had the sticky toffee pudding with black pepper ice cream (ps The Gorbals gets all of their funky ice cream from OddFellows). The texture of the pudding (think bread pudding) was what the texture of the brownie should have been: nice and moist. This one was definitely delicious and for the slightly less adventurous. But don’t let the crazy ice cream flavors throw you off, you can barely taste the pepper/scallion/weird stuff.

After rolling home, I have decided that The Gorbals is going to be a new fave of mine in the neighborhood. Also worth mentioning that the space is not crazy big, but it has a nice area in the back where you can put together a big Last Supper table for a large group. Bacon wrapped matzoh balls, and now I’m throwing Jesus references all up in here – we’re just sacrilegious. Or SACRILICIOUS.