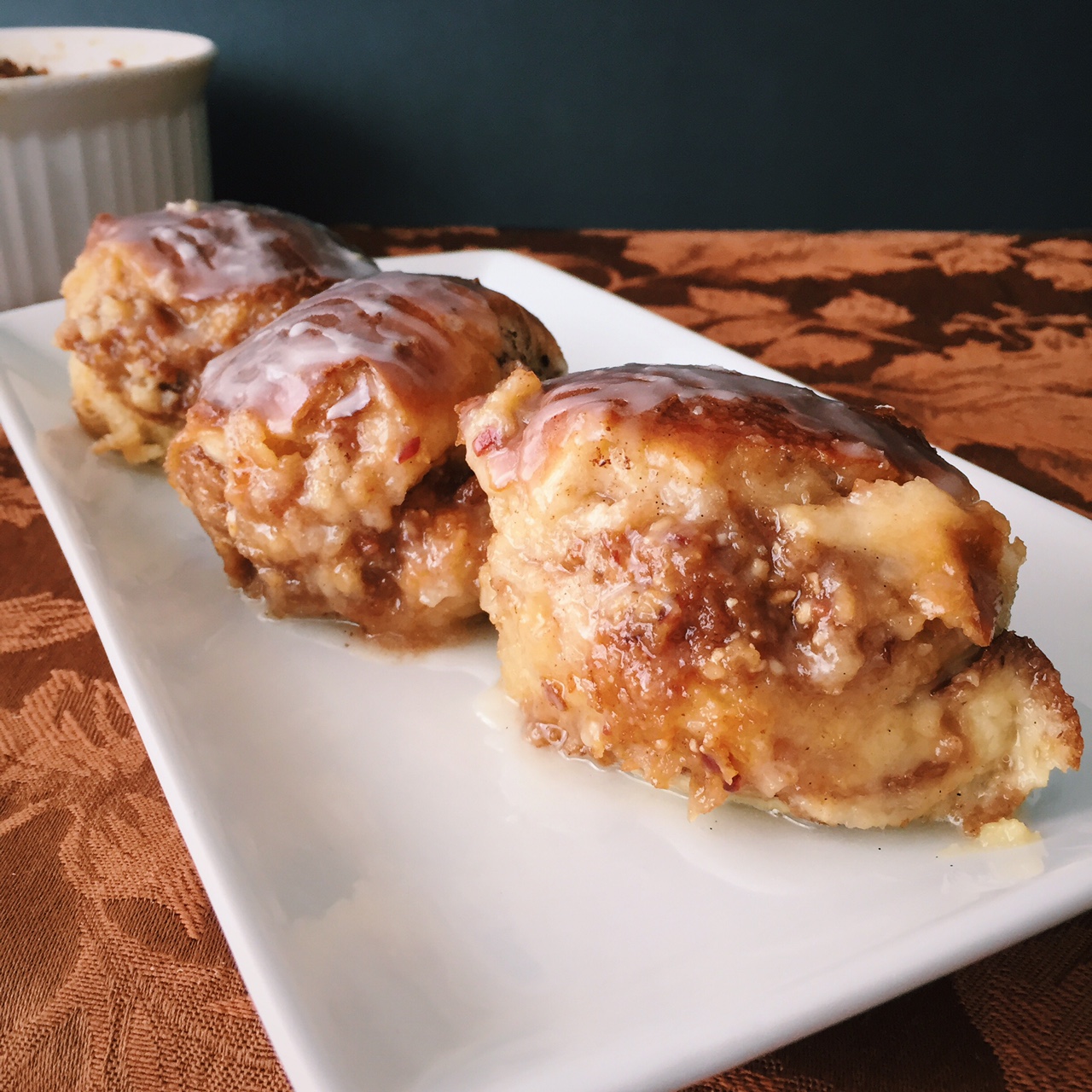 You may have noticed that I like to name my recipes. I figure if I don’t have children to name, I can just name what comes out of my kitchen and unironically, my oven.

So here we have Sticky Fingers Brioche Bread Pudding. I call it such because these little brioche buns are stuffed with a homemade maple bacon peanut butter (sticky), then baked in a French toast custard (gooey), then covered with icing when it comes out of the oven (more sticky). It’s decadent, delicious, and will make your home smell like Christmas morning. And when it’s the dead of winter with no end in sight…you need that. We all do. Note: For the maple bacon PB, I used creamy pb and added fresh peanuts into it for texture and crunch. I suppose you could just use crunchy PB, but I really liked the addition of the fresh roasted peanuts. 1. Make maple bacon pb. Add all ingredients into a food processor except for maple syrup. Pulse until chunky yet smooth. Add maple syrup and pulse until it comes together and looks like a paste. That’s it. So easy. 3. Poke/cut a large hole in the side of each brioche bun. If it’s easier, just cut down the side in half, being careful to not slice it all the way through. Dunk the brioche buns one at a time in the egg custard mixture, making sure they soak up a good amount. 4. Take roughly 2 tbsps of the maple bacon PB and stuff inside the brioche (either via the hole or split method). Continue to finish all of the brioche buns. 5. Butter a round casserole dish (or use cooking spray) and arrange the brioche buns in a circle formation so they are nice and tight in there. Stuff those bad boys in and make them get cozy with one another. Take the leftover custard and pour over the brioche in the casserole dish (this is the bread pudding style). If you want, you can also sprinkle a little cinnamon/sugar over the top before baking. Not necessary, but I did. 6. Cover and bake for 10 mins and remove the cover. Bake for another 10 mins, or until your desired French toast doneness. I like a semi-squishy French toast, whereas my mom likes it a bit more well done. But she’s a weirdo because gooey French toast is THE BEST.

7. While the brioche is baking, make the icing. Pour powdered/confectioners sugar into a large bowl and add the milk/water. Whisk together. This is a very basic icing but it works. Again if you have vanilla extract, you can add a drop in here too. 8. When it’s nice and hot out of the oven, pour that icing over the top and serve immediately. Let the heavenly scent of bacon and peanut butter and cinnamon fill your nostrils.