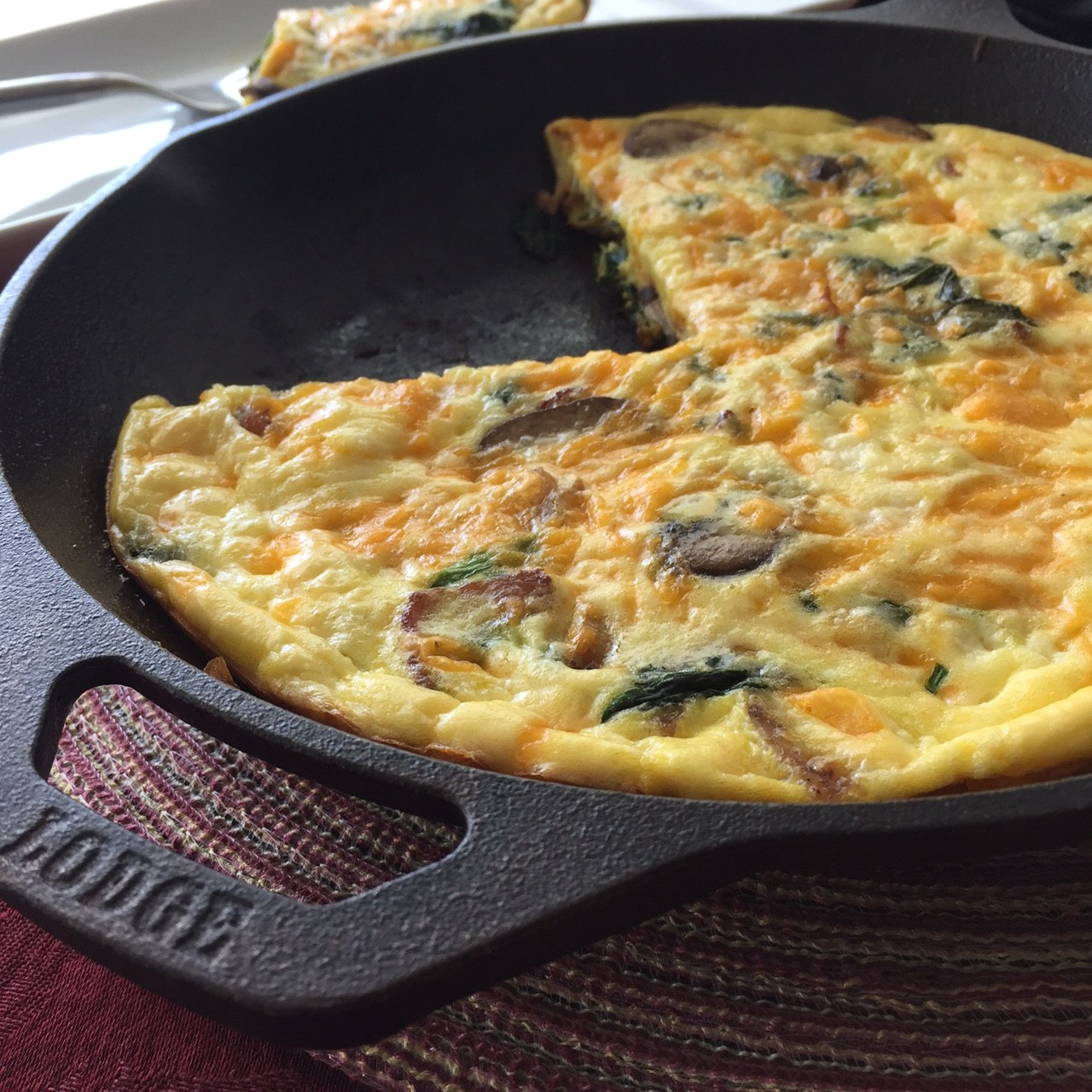 Remember that FreshDirect giveaway? And all that lovely fresh produce they gave me? Well that’s still going down in my town and I made a delightful spinach and arugula frittata with bacon, mushrooms, and potatoes. I know you’re thinking “well that started out real healthy…”

But…you know me by now. So what is a frittata exactly? It’s pouring eggs into a cast iron skillet and baking it. Beaten eggs, so it’s more omelette and less shakshuka. Make sense? You’ve seen them probably on every brunch menu that exists. They’re great when made right, and can make a simple yet impressive dish for entertaining. Here’s a trick to making frittatas fluffy and not spongey: dairy. Not just milk, mind you, but something fun and decadent. Give up? It’s creme fraiche. I used creme fraiche in this one and I heated it up a day later in THE MICROWAVE and it STILL wasn’t spongey. And if you know anything about microwaves you know that they suck the moisture right out of everything.

Feel free to add whatever fillings you like in here, thats the beauty of a frittata: they’re kind of like garbage disposals. Garbage disposals that you eat. Ok I’m not making that sound very appetizing, but you get the idea. And here’s the directions on how to enter the FreshDirect Giveaway to win a $50 FD Gift Card! All you have to do is like me AND FreshDirect on Facebook or follow us on Twitter, and you will be automatically entered. Then I will select a winner at random (and notify via email or social media) after the July 4th weekend. HAPPY 4th INDEED! Special equipment needed: cast iron skillet, whisk. Is a whisk necessary? No…but it’s better than a fork in this scenario.

1. Heat a large skillet over medium heat. Add the olive oil. When the pan/oil is hot, add the spinach and arugula. This will look like a lot, but don’t worry because it will wilt down. 2. Heat the cast iron skillet over medium-high heat. Throw in the chopped bacon and cook until mostly cooked through but not crisp. Only takes a couple minutes. 3. Add the mushrooms and scallions. Saute until the mushrooms are tender and lightly browned and scallions are wilted down. Add the potatoes near the end of this process since they are cooked and you don’t want them to turn to mush. We want the potato slices to keep their shape! Add spinach/arugula to the mix too. 4. While the veggies are cooking, break the eggs in a large bowl and whisk. Add the creme fraiche and half of the cheese. Whisk until almost no lumps are left from the creme fraiche. I didn’t get mine totally smooth, so don’t stress this too much. It will cook and melt together. 5. Pour the eggs into the cast iron skillet with the veggies. DON’T stir. You don’t want to scramble the eggs. Just let them sit on the stove for a few minutes until the edges set. I timed roughly 4 mins. Add the remaining cheese on top. 6. Pop the skillet into the oven for 15 minutes. The top should be ever so lightly browned and puffed up a bit. Let cool and slice.