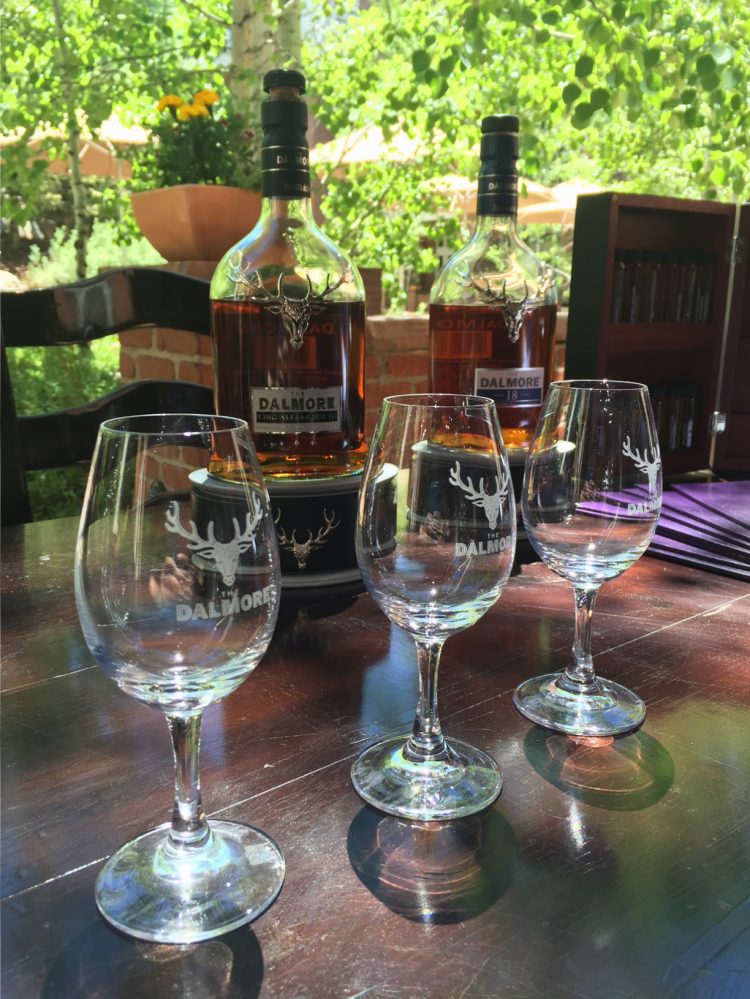 Here’s something a lot of you may not know about me: I love whiskey.

There’s a slight stigma (and misconception) that comes along with whiskey and the people who drink it: it’s too strong, it’s harsh, and it’s predominantly “a man’s drink”. I’m here to tell you that if you’re drinking good stuff, like The Dalmore, it is none of those things. A good whiskey can be just as smooth and pleasing to the senses as a good wine…if you know what you’re doing. Now let me preface this by stating that I am no expert, but after a few tastings and most recently, a private tasting at the Aspen Food & Wine Classic with The Dalmore’s Rare Whisky Director, Jonathan Driver, I think I’m well equipped with whisky whits. Say that 5 times fast.

Most people don’t even know what whiskey is. Or bourbon. And do you know what Scotch is? It’s whiskey made IN Scotland (hence the name) AND Scotch whiskey actually has no “e” in it – it’s whisky. So when referring to The Dalmore (like I am doing in this article), we spell it “whisky”. Whiskey is distilled from fermented grain mash and aged in oak casks. Whiskey must be aged for a minimum of two years, Scotch is a minimum of three years. Bourbon is made from fermented grain mash that’s mostly corn, and aged for no less than two years. Much like scotch, it can only be called bourbon if it’s made in the US. #themoreyouknow We could go into the extreme details here on ABV percentages and what not, but I hate numbers. I’d rather share what’s more important for the every day person: how to taste it properly and how to pair it with foods.

How To Taste Whisky People have this misconception that whisky will make their eyes water and burn going down. Now you know if you taste it properly (and aren’t taking a shot of Jameson), that won’t happen. In fact, one of the reasons women are becoming more adept at whisky drinks is because they are becoming educated on the product (you’re welcome, ladies). The omnipresence of cocktail bars making whisky cocktails doesn’t hurt either, but there is a huge demographic shift happening within the whisky world favoring women. I’m just happy that Beyonce didn’t have anything to do with this one.

Now. Onto the food pairings. This was probably my favorite part (shocking). Here are some suggestions in case you want to host a tasting of your own. So there you have it. You have the basics of whisky (and whiskey with an E), how to taste it, and what to pair with it. AND you know the difference between Scotch and Bourbon (albeit on a very basic level, but enough to make you sound like you know your stuff).

The most important thing to remember when hosting or attending a whiskey tasting is to take your time – it’s a very different vibe and different culture than wine. Wine has a certain joie de vivre; it’s exuberant and highly spirited (no pun intended). Whiskey on the other hand, is just as social, but there’s a nostalgia to it – it’s a walk down memory lane where time stops for a bit. And I happen to really like that. In this world where everything moves a bit too fast, perhaps we all need a little whiskey sips in our lives.

If you have the opportunity to experience The Dalmore, I highly recommend it. It’s not cheap, but that’s the point – it’s worth it for a special occasion.

And now you know what to buy me for Christmas.