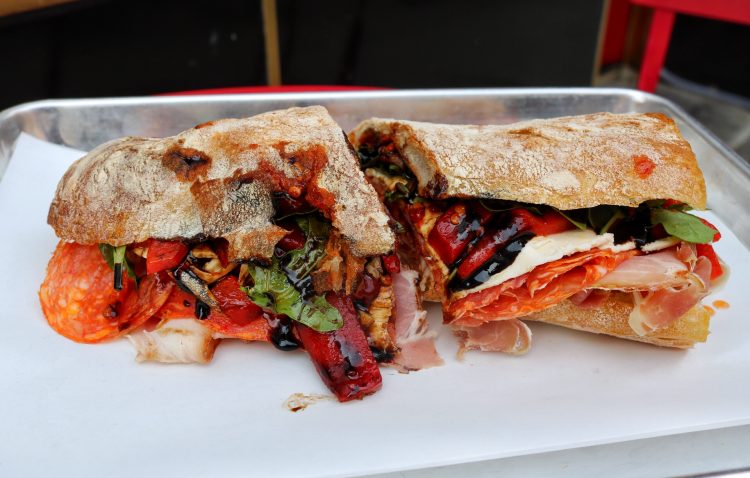 There are few things I love more than a good sandwich. The type of bread, the innards of meat, cheese, and veg all topped with herbaceous oils, spicy mayo, or grainy mustards… MY GOD THE OPTIONS ARE ENDLESS.

I’ve done my research but I’m sure there are other places I have yet to try, so feel free to let me know some of your faves. In the meantime, these are some of mine and if you’re a fan of all things on bread, you should check them out.

From standard Italian deli sandwiches to crazy, over the top heroes with gravy, Anthony & Son is one of my favorite places in the hood. Try the FDNY (with bacon, below) or the Baglivo. Amazing, iconic Italian deli sandwiches. That’s it. If Italian coldcuts with fresh mozz and the most beautiful vegetables you’ve ever seen is your thing, you gotta get here. The namesake sandwich is legit with roast pork, provolone, and hot peppers. BUT, they caught my eye with their cheese fries and cheesesteaks. Bonus: They play Goodfellas on loop inside the store. Here’s the thing. I love Katz’s, I really do. But I don’t love the long lines and I don’t love the price. I think I spent $36 on pastrami on rye and an order of potato latkes. That’s fucking banana land. But if you’ve never had it before, I think it’s worth experiencing.

The ever-so-hip Italian restaurant in Williamsburg also serves sandwiches. Did you know this?! Me neither. The burrata sandwich is a game changer. They now have bagel rolls, so…you no longer have to make the decision to eat a sandwich on a bagel or a roll. WHAT A TIME TO BE ALIVE. Also, they have pizza bagels. I know that’s not a sandwich, but still. A newcomer to the LES, Regina’s has only been there a couple of months, but it’s got some staying power with sandwiches like the Uncle Jimmy (prosciutto, mozz, hot sopressata, smoked ham, arugula, Regina’s hot pepper spread, EVOO, balsamic glaze and roasted red peppers on Striato Bread) This has been a longtime favorite of mine. I feel like they were the OG’s in the “put weird shit on sandwiches” game. They had (and still have) Zucchini Parm, Broccoli Classic (seriously it’s so good), and General Tso’s Chicken sandwiches. Parm – 248 Mulberry Street (and other locations)

Most people in NYC know Parm as “the affordable Carbone”. If you’ve ever been to Carbone and paid $76 for Dorado or $27 for meatballs, you know what I’m talking about. And they make a KILLER meatball parm sub.

The cousin of Blackseed Bagels, Mile End Deli is a “cool” Jewish deli by way of Montreal, Canada. So if you’re looking for poutine with your Reuben, this is the place to go. I added this in here because I LOVE their DLT – it’s a twist on a BLT with DUCK BACON and it’s INCREDIBLE. They don’t primarily do sandwiches, but I felt it was worth mentioning anyway. Because this is my blog and I’ll do what I want.