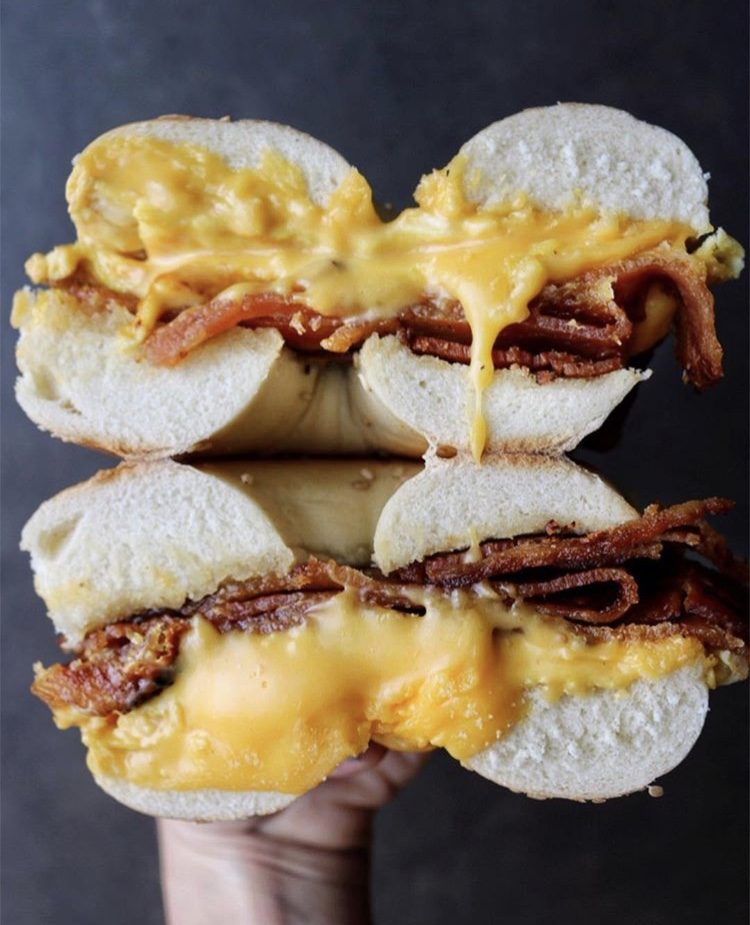 Sometimes you have to pick the important shit to talk about and fight for what’s right.

These are some trying times in America. I mean…we have people screaming at the sky today across the country (seriously Google it).

2017 has nearly come and gone and one thing remains constant: some people still hate American cheese.

It’s a very serious problem and it needs to be addressed.

As a food blogger, food writer, and recipe developer, I feel like I’m something of an authority to speak on this topic. Do I like American cheese? Yes. Do I love it? No. There are literally a dozen other cheeses I would rather eat, but American cheese serves it’s purpose for a few things. I bet if I asked 10 people on the street at random, 7-8 of them would tell me the proper uses for AC. Do you know what they are?

I think that’s really it. The melting quality of American cheese is superior to other cheeses by about tenfold. Look at this picture. LOOK AT IT. This is a combo of white and yellow AC. And Bacon Jam because obviously: Try to get fontina, goat, gouda, or even cheddar to do that. You can’t. Trust me, I’ve tried. They all break, congeal, and/or get oily in random places. I love all of those cheeses, but if I had to pick one cheese to put on my burgers for the rest of my life? You are damn fuckin right it’s gonna be American.

BUT DARA, IT HAS NO FLAVOR.

No, you’re wrong. It DOES have flavor, but it’s MILD. Whyyyy do you think it is a classic on burgers? Because you don’t always want a rich cheese on top of your burger – you want the meat to shine and those flavors to be the star. Not the damn cheese. And grilled cheese? Whyyyy do you think kids love it so much? Because kids have about 10,000 taste buds while the average adult has about 5,000. They are more sensitive to stronger flavors, so the mild flavor of American cheese is just enough for them. And me too, if I’m being honest.

I dated a guy once who loathed American Cheese. You can guess where that relationship went. Jk. It went away for other reasons. Like him just disliking everything about my general existence. Or because I like American cheese.

I couldn’t understand why he hated it so much and his resounding answer was either “it’s gross” or “it’s not cheese”. Welp, hate to break it to you guys who are on the same side as Doofy McDooferson here, but it IS cheese. In fact, it comes from real cheese just like the rest of cheese.

ALL CHEESE IS PROCESSED. YOU THINK A COW POOPED THAT ORANGE BLOCK OF CHEDDAR OUT OF IT’S SQUARE-SHAPED ASSHOLE?

Listen. All cheese is processed to some degree. Some not as much as AC, but you’d be surprised to know that many of your favorite cheeses are processed with things far more “gross” than enzymes and pasteurized milk like AC. Gruyere is bathed in a bacteria brine called “morge”. Blue cheese and Roquefort is ripened with cultures from mold (yes MOLD) from the bacteria penicillium roqueforti. Halloumi and brie cheese is treated with rennet. Oh, what’s rennet? It’s the stomach lining of a baby calf. NOW WHO’S GROSS??? YEA ENJOY THAT BRIE AND VEGGIE WRAP, JACKASS. And how is American cheese made? It starts with real cheese (GASP), usually cheese scraps, and then it’s either blended with other cheeses, and treated with additional whey, salts, and emulsifying agents to alter the flavor and texture. Sodium citrate is what makes it melt so wonderfully. You will also find this “chemical” in plenty other foods you likely eat – canned tuna, sausage, club soda, and even wine.

Does AC have more additives than other cheese? Yes, of course. No one is denying that. And I’m not trying to tell you that AC is “good for you”. I don’t eat it every day. But in terms of what it is, it starts with cheese. And Kraft Singles specifically have to be a minimum of 51% cheese (usually cheddar and/or Colby base) to be approved and labeled by the FDA. So for those of you who say it isn’t cheese…you might want to read a fuckin book. Or you can literally read those labels for yourself if you don’t believe me (this article on Serious Eats also breaks it down in a less mind-numbing way).

During my research, I came across SO many articles (as you can tell), but this one was my favorite. So holier than thou. Meanwhile, this person sounds like an idiot. “Is it real cheese? Technically, no”. Next paragraph: “Processed cheese product is made from cheese”. I actually laughed out loud at that.

My point is this, guys. Don’t hate on something because of a stigma. American cheese was invented to stop food waste. Mixing old scraps of cheese with new batches and treating it to have a longer shelf-life. If you’ve tried it and you genuinely don’t like the taste, totally get it. Or maybe the plastic-like sheen just skeeves you out. Fine. You do you. JUST SAY THAT THEN. You don’t have to have a more valid reason for not liking something. For example, I hate oysters. They are an elegant delicacy to some, but to me, they are unappetizing and I don’t like the texture. And I just say that. I don’t go around saying I don’t like them because they throw off the ecology of the ocean or some crap. So stop trying to sound smart and justify your hatred by saying “it’s not cheese” and “it’s gross”.

I’m done. Gonna go have a sexy party with a BEC, a burger, and a grilled cheese. AND THEY WILL BE OOZING WITH AMERICAN CHEESE.