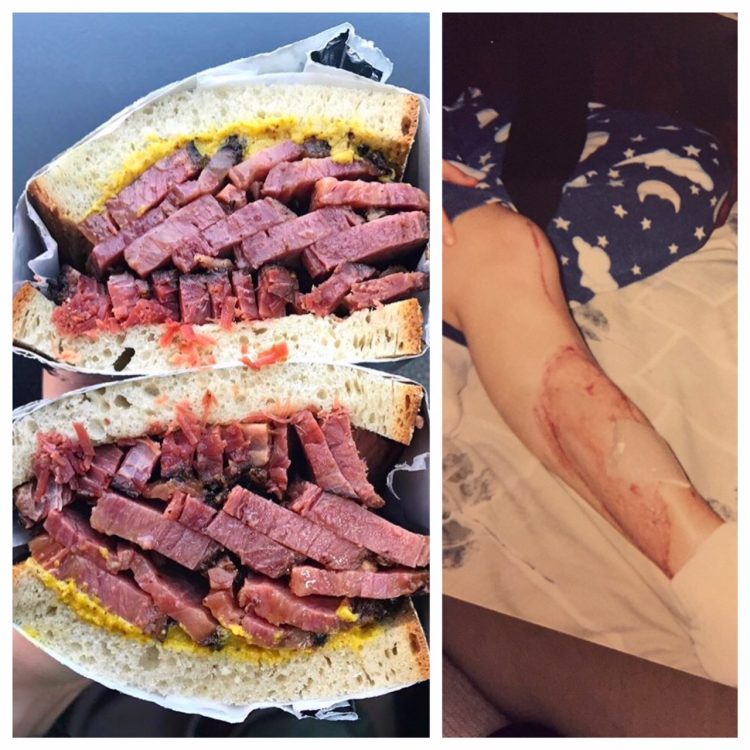 You’re probably thinking…what the hell is she talking about? Does she mean chicken leg??

I’m referring to my skin-grafted leg, which some of my friends have dubbed “the ass leg”. If you still don’t know what I’m talking about, read this first.

Now that you’re caught up, my “ass leg” was called that because the surgeons grafted skin from my butt to cover/close the wound on my leg. Good times. Personally, I always thought it looked like pastrami or some other form of luncheon meat as opposed to my actual ass.

A few people have asked me over the years how I dealt with that at such a young age, and the short answer is…not well. They asked me if I was ever ashamed of it (YES) and if I was ever scared to tell people about it (YES). The saying “time heals all wounds” does not completely apply here. Obviously as the years have gone on I barely even think about it anymore, but that’s also because I had a strong dose of therapy every week. So I’d say something more along the lines of: So I wanted to write this to answer some of your questions and share how I got past it. A few of you really got to me last week with your messages and I feel compelled to try and help. Not saying this will work for everyone, but shit like this is not an overnight fix.

If you had an injury that was anything like mine, you’ll probably relate to feeling like someone took away a piece of who you are. That’s how I felt for a long time, until I made my scarred and misshapen leg part of my “new” identity. Because I think the hardest part is facing that you’ll never be the same again after that. Physically or mentally. You have to really put in the work to overcome, and THAT is what takes time. Just wrapping your fucking head around it.

In these messages, a lot of you said that you regret leaving the house at X time, or your mom regrets not driving you to school that day, etc. That was the very first step for me in healing was learning to stop regretting and stop looking back. There’s nothing you can do about that (outside of make yourself insane). You’re fucking here now. And be happy that you are because you’re LUCKY that you are. It’s easier said than done to just “be happy”, trust me I know, but you have to move forwards, not backwards.

“You know how many people get hit by cars and DIE, Dara?” This is what I would tell myself eventually. But at first, I stayed up for days on end just going over EVERY detail in my mind:

“How did I not see this coming?” Umm because I think if you could see that kinda shit coming you’d have your own show on Bravo? Duh.

“What did I do to deserve this?” This one is a little more fair, I’ll give you that. But the truth is…there’s no answer to that and searching for one is a G-damn waste of time. I did nothing to “deserve” this. I was a brat at times and I cut class. That was probably the extent of my wrong-doings at the time.

Bad things can happen anytime, anywhere, and there’s nothing you can do to prevent it. But like, don’t go running across a freeway for kicks, because then you’re kind of asking for it.

Fun fact: I actually was super against therapy at first. I know you’re like wait…you preach this shit all the time. And you’re right, NOW I do, but back then, I was 17 years old and I thought therapy was a self indulgent practice for people who have too much time and money on their hands. So I wanted to prove I was right. And in my mind, I was gonna take this bitch DOWN.

I remember my first meeting with Miriam* like it was yesterday. She was an older, Jewish lady with lovely red hair that she wore in a cute bob. I attribute a lot of my success in getting through this to my weekly meetings with her, I really do. BUT, again, at the time, I sat there in silence during our first session. I barely made eye contact. I kept my answers short. I thought “YOU’RE NOT GONNA BREAK ME BECAUSE I’M ALREADY BROKEN” or something really emo like that. GOD I LOVED BEING EMO. WHY ARE ALL 17 YEAR OLDS SO EMO. But I digress. I’m not going to tell you every detail of the first session because that would be boring, but I will say that even in that first meeting I remember walking away feeling a BIT lighter. I couldn’t really explain it and I was still 100% convinced that therapy was bullshit. Yet…I kept going back. For the next 5 years. I’m the type of person who needed therapy. Badly. Insert laughter here, but I mean this on a very serious level. I had a lot of issues that I never dealt with and I wouldn’t be who I am today if it wasn’t for that.

To be fair, I had to be VERY careful with my leg for the first few years. The skin graft area was incredibly sensitive to the touch, I had a lot of nerve damage in my foot (still do), and I had to wrap it in ace bandages underneath all of my clothes to protect it. Even now, parts of it feel like tingly pins and needles if someone touches it, while the other parts just feel numb. I also couldn’t get sun on it for the first few years while it was healing, and I had to undergo graft removal surgery every 4-6 months over 3 years. Imagine being 18 and having to wear stretchy (and flared) pants at the beach. Like wearing bell bottoms IN the water. I felt like a weirdo. I felt ugly. And it sucked. Now I’m a weirdo all the damn time for much less serious reasons and I don’t care but back then I was more shy. Plus, teenagers are MEAN. At that age, having physical deformities of any kind makes you “a freak” or something equally as rude. People who knew me obviously were kind about it, but I hated it. I was a dancer, for cryin out loud. I had NICE legs. I have strangely long legs (and arms) for someone who isn’t very tall. And thinking about having that misshapen pastrami leg walking around with me for the rest of my life REALLY sucked. But strangely enough, that very same mentality is what made me push through it.

I told myself “this is not going to change much. It’s always going to be a part of you. You can be a baby about it or you can accept it.”

So…not only did I accept it, but I had fun with it. When I was able to actually let it see sunlight, I started to wear shorts and skirts in public. And if anyone asked me what happened to my leg, I’d occasionally tell them I was attacked by clams. Or had an unfortunate accident with a pack of stray cats. One time I made up a whole plot with angry villagers but I don’t really remember who won.

But you get my point. For me, sarcasm and humor are ways of coping with things that are tough. Once I can laugh about them, they start to become more normal. It’s a total defense mechanism, I’m not denying that. But is it bad if it works? Because day by day, laugh by laugh, I got used to it and I got better.

Fast forward to present day. I joke about my leg ALL the time, not to mention I can talk about it with almost anyone (clearly, as I sit here and write this for thousands to see). The point is…the more I accepted it and became vocal to others about how I accepted it, they did too. The only times I ever still get upset about my leg is when I can’t keep up with people physically. Long walks, dancing in heels, hiking (literally I don’t even bother), running outside. My last boyfriend was in very good shape and liked to run a casual 10K every weekend (psycho). I tried to go with him one time and it was damn near impossible for me – I was limping back to his apartment. And it upset me a lot. As a former dancer, we are competitive by nature and pride ourselves on our physical strength. But hey, I tried and that’s better than giving up or not trying at all.

When something like this happens to you, it changes your perspective on life and on people. I used to be an incredibly shy and judgmental person. Then this happened and I decided that I was wasting my life being concerned about what other people think and not living it instead. I know I sound like a Joel Osteen special probably, but it’s very true. The more you grow up the more you realize people are just out there for themselves, so you need to be the same way. Not saying you should be a selfish prick but…do what makes you happy. Be honest without being a fool. And most importantly, surround yourself with people who make you feel good about who you are and fuck what people think.

I will die old and alone with a lot of cats and birds before I live my life according to someone else’s timeline.

Hope this helped you in some way. You know who you are.