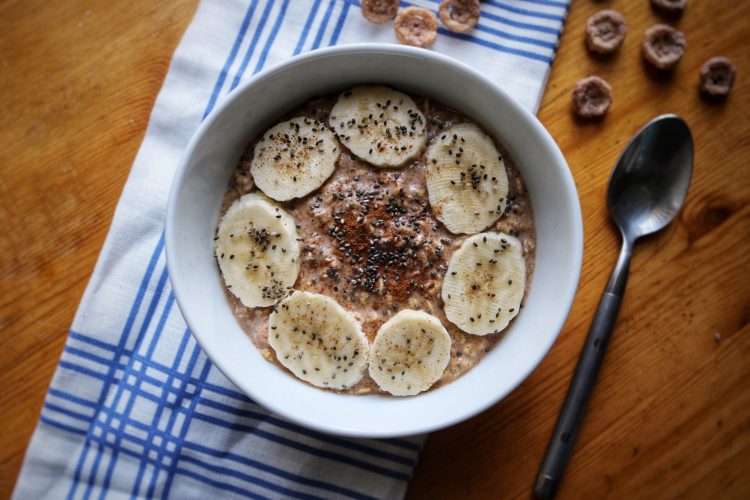 Before you get overly concerned, let me just tell you that I have NOT become one of those insufferable d-bags who has an empty fridge with seventeen massive jugs of protein powder on top of it.

AND, if I’m being honest, I dated one of those people…from a physical standpoint let’s just say I could have spent an afternoon licking his abs and arms and I would have considered it a productive day.

What’s my point? I don’t know if I have one. I got distracted. But um…I think protein powder has it’s benefits.

I preach this all the time about my overnight oats. I love them and I don’t like eating the same thing every day, so I have to change things up a little. I also tried this Cinnabon cereal recently and it inspired me to try getting that flavor into my diet without totally binging on sugar. Enter: Cinnamon Roll Proats. I also really like saying proats. I don’t know why on that either.

The first time I made this, I used 2 tbsps of almond butter, and I do think I liked that a bit better (because, duh, more AB), but if you’re trying to cut the cals, just stick with 1 tbsp. You’re not going to miss it THAT much. Also, top with banana slices if you have a banana. I didn’t and I was sad for at least 17 minutes.

I use Fage Total to make my oats almost every time, because the 0% tastes like wet chalk. But if you’re not a fan of Greek yogurt, you can use a regular Plain yogurt, just don’t get one that’s packed with sugar. Kinda defeats the purpose. You don’t have to top with anything if you don’t want to either (BANANA). I usually eat them just like this (below) at least once or twice per week. An extra dash of cinnamon and I’m set. Note: I used BioChem Whey Vanilla Protein, which is organic and doesn’t have artificial sweeteners, it actually uses real cane sugar (this may be a plus or minus for some of you). I used 1 scoop, but a full serving is actually 2 scoops. So technically I used 1/2 of the regular protein serving, because I found the full serving to be too sweet. When it comes to flavored protein powders, they’re usually mixed with low cal or artificial sweeteners which tend to be VERY sweet and I don’t love that. But if you like a full serving of protein, or if you like sweet, then go for the full scoop. Be brave.

UPDATE: I found a banana!!