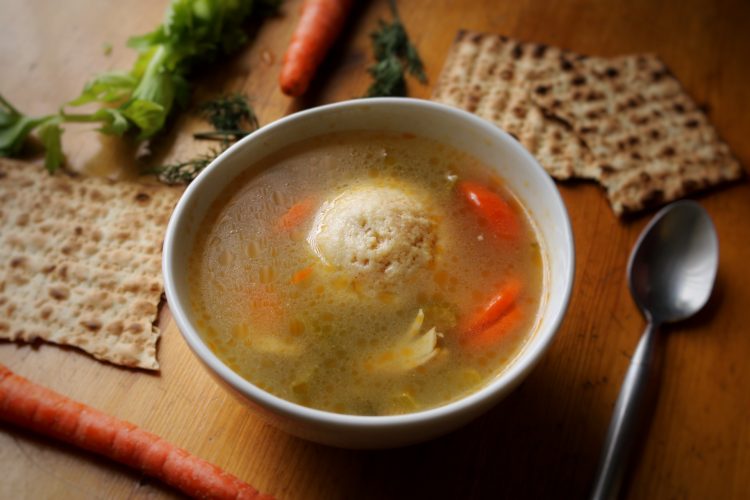 I haven’t celebrated Passover in a long while (as I mentioned in a previous post), and honestly that made me a little sad. I’m not from a religious family, but it’s still something that we all used to do together, and now we just don’t. So…I thought I’d bring back a little bit of the family tradition with some homemade matzo ball soup. Well…mostly homemade.

I’m not going to lie to you – this method is a little bit cheating, but it’s also a lot delicious. And A LOT more time-saving. So if you want to get an amazing bowl of this stuff on your table quickly, try this out. I’m telling you it’s a winner – hence the title of “Amazing Matzo Ball Soup”. My mom had some the other day when said she wasn’t even hungry, meanwhile, 5 mins and one empty bowl later…you see my point.

Here’s the semi-shameful part: I used the boxed Matzo Ball mix. I KNOW, I KNOW, OY OY OY WHAT A SHANDA (that means embarrassment, I think). But it wasn’t my fault! I wanted to make them from scratch, but I bought the wrong thing – I wanted matzo meal, but instead bought matzo ball mix. THEY COME IN BASICALLY THE SAME BOX. My Safta probably rolled over in her grave. Meanwhile I just rolled with it. I’m not made of money and I was too lazy to put on pants and go out to the store again.

The other part I cheated on (and will continue to cheat on for the rest of my life) is the chicken broth/stock. This is actually a genius method, if you ask me. It’s part store-bought chicken broth, part water, and then part rotisserie chicken and the bones cooking in it. I used the same carton that the chicken broth comes in and just filled it up again. So easy. I added another half of a carton or so because I felt it needed more. After 30-40 mins you have a beautiful, golden, deeply flavored stock that tastes like it’s been simmering on the stove for hours. I don’t like to use the word “hero” too often but…just sayin.