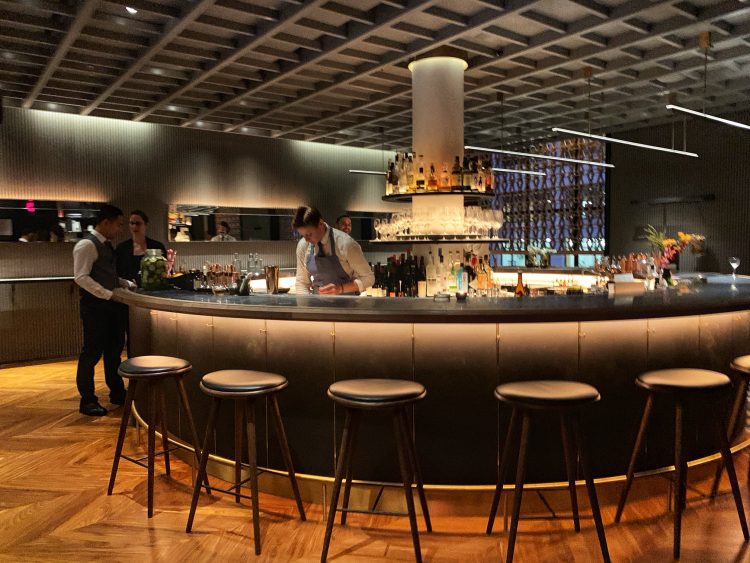 If you’re wondering, it’s pronounced “meh-shu-gen-uh” and it means “crazy” in Yiddish.

I’ll be totally honest, I’m half-Jewish and I was pronouncing it like “Michigan” until I saw the Israeli-inspired menu and put two and two together.

Nothing gets by me!

Before I even start in on the food, let’s talk about Intersect by Lexus. This trendy spot in Meatpacking is operating as a rotating pop up venue, offering chefs the opportunity to promote their restaurant via a one-month residency.

And again, it’s sponsored by Lexus, so don’t be surprised when you walk through the bathroom (with automatic sliding doors and toilets with heated seats) and see a bunch of tiny cars on the walls.

The restaurant isn’t huge, but there are two areas, one with the open kitchen and bar seating (where we sat) and then the actual oval-shaped bar on the other side, sleek and gray. Speaking of the bar, try the “Crossing Delancey” cocktail with rye, caraway, brown sugar, pastrami spice, smoke, and salt.

This month, we were lucky enough to experience Mishiguene, which is a modern Jewish restaurant in Argentina run by Chef Tomas Kalika. Mishiguene is also one of the world’s 50 Best Restaurants, and number 18 on Latin America’s 50 Best list.

We started out with the beet hummus with charred vegetables and pickled quail egg. I’m also a sucker for labneh, which was painted on underneath the bright pink hummus. The fresh, warm pita that came to the table at the start of the meal was a nice way to scoop up all of that creamy deliciousness.

The kibbeh was even better than I expected – actually I’m lying, I didn’t really know what to expect, but I’m glad I ordered it. Bulgur and beef tartare, more labneh, tomato coulis and some of the best laffah crackers I’ve ever had. It was a wonderful display of flavor and texture, I could have eaten an entire plate of just that and been satisfied. But alas…

There was a tongue sandwich and pastrami short rib calling my name. The tongue sandwich was actually part of the starters, so we ordered two since we were four people. The tongue is thick cut into cubes, served on challah bread, topped with coleslaw, very finely chopped egg, dijon, and gribenes. I’m not a huge fan of tongue but that was delicious and perfectly seasoned.

Moving onto the main event: the pastrami short rib. Not sure why I never tried something like this before, but I’m clearly a better person now because of it. So flavorful and tender, with a honey-cognac glaze, it melts in your mouth. You can order it in a “generous” portion ($75) or a “very generous” portion ($125); no really, that’s how it’s described on the menu. The generous portion was enough for all of us, but that could also be because it comes with a large bowl of crispy, truffled spaetzle too. And we also got the burger, which isn’t a part of the Mishiguene menu, but 100% worth mentioning.

The Intersect Burger is dressed up nicely with miso cheddar, pickled cucumber, pickled fresno chiles, fried shallots and ginger ketchup on a steamed brioche bun. It was amazing – the steamed bun had a bao-bun like quality, with crispier edges! I lovedddd it. So glad the boys pushed for that one.

After all that and quite a few signature cocktails, it was time to head home. I’m not a big dessert person, so if you had something there that you think is worth trying, leave a comment below!