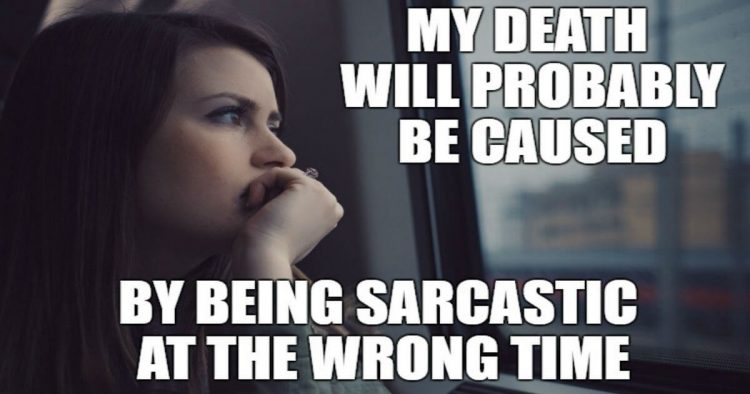 There’s a BIG misconception in the world about sarcastic people, and I’d like to clear that up right the fuck now. It genuinely makes me angry that a style of humor and dark commentary makes you a bad person. Or a negative person. Or a mean person. Or (insert literally any bad personality trait here).

Sarcasm actually takes a considerable amount of intellect as well as creativity, but if it’s not used wisely, it can be easily misinterpreted and make you sound like a prick. A sarcastic quip shouldn’t be taken at face value, so if you’re on the receiving end and not used to it, there’s some mental gymnastics needed to convey the actual meaning. Due to that fact, studies have shown that sarcasm can actually improve creative thinking. Yay!

That said, with all the text communication we do these days, it’s THAT much harder to be a champion of sarcasm. Tone and inflection is a big part of the delivery, so when you lose that, you lose half of the humor.

Now before I go on, allow me to point out that PLENTY of people use sarcasm as a defense mechanism to keep people at a distance. I’m not denying that (because I kinda used to do it), but I’m just out here saying that it IS possible to be a good person with a side of sarcasm. It takes some practice, but it can be done.

Most people think that sarcasm is just rude, especially those who weren’t surrounded by it growing up. I’ve encountered this many times in my life, and after much half-assed research, I can say with some level of confidence that I think it’s honestly a regional thing. I’m from New York City, where sarcasm is basically a dialect, but travel to somewhere like LA or Arizona, and you’ll find yourself apologizing to people. A lot.

I remember the first time I visited my best friend in college (The University of Arizona), for Spring Break in the early 2000’s. Yes, I’m that old. Uggs were really big at the time. Why anyone would want to wear boots made out of a fleece blanket in a place like Tucson where it’s regularly 100+ degrees is beyond me, but whatever. As we’ve already established in previous posts, I don’t understand fashion.

Anyway, being that I went to a state school and lived at home, Spring Break at U of A was my way to live vicariously through friends and play out some of my college fantasies (i.e. shots of 99 Bananas combined with a lot of poor choices).

Upon meeting some of her U of A clan, after about 24 hours with me, more than half of them thought I was a huge bitch. Why? Because I’m sarcastic. I would reply to my friend in quick, witty bursts that would make everyone do a double take as if to say “did she just SAY that?!” Here are some examples:

“Wait the weather is hot here? I hadn’t noticed.”

“No that’s cool take your time, I’m enjoying sitting here in a puddle of sweat.”

I mean, I guess I can see the confusion if you’re not used to it.

But that’s where the problem started. I had to apologize to people left and right, or I had to follow every sarcastic comment with “I’m just joking” or “I’m just being sarcastic”. Eventually they warmed up to me, but there was that inner gut feeling that most of them just didn’t like me because of it. Or worse, they didn’t trust me.

Oh, and we’re not even done here. Next, we bring in the second act of my personality: the dry tone.

Dry humor and deadpan replies are my specialty. I’m like a walking episode of Frasier or The Golden Girls (Niles and Dorothy, specifically and respectfully). Some of you may not even know those shows but sorry, I’m old. If you’re not paying attention, you might miss my jokes. But again, they are still JOKES.

I make people laugh quite often when I’m in a social setting, but I can also piss off people in a social setting if I’m not careful. Rule #1 of any pretend comedian at a party: read the fucking room. I can usually tell if I’m surrounded by people who won’t get my humor, in which case I play the nice, small talk card, which is the equivalent of taking Lorazapam and chasing it with a bottle of Pinot Noir. Goodnight. There are few things I hate more than meaningless small talk.

Now, dry humor as it relates to my job as an “online personality” is probably the biggest issue. If you’re a dry person and part of your job is to “entertain” people via Instagram and a teeny tiny screen on a smartphone, the idea is that you want to bring “energy” and “enthusiasm”. Make yourself appear bigger, louder, and SUPER FUCKING EXCITED TO BE HERE.

Cut to me, auditioning for every food/cooking reality show that has ever existed:

Casting director: “ok Dara that was AWESOME. But can you do it again, just like, more excited?”

Me: “umm, I am SO excited for this, honestly.” (barely smiles)

Casting director: “umm yea well can you just AMP IT UP a little? Just give us a bit more?”

Me: “like, this is my excited face, I don’t know what to tell you.” (laughs nervously)

Casting director: “ok, thanks for coming in.”

Me: “ok bye so great to thank you so much have a great time.”

This happens every time. EVERY FUCKING TIME. That last part is also just what happens when I’m nervous. I merge like three different variants of “bye” and “thank you for your time” together and end up with something that makes people think I’m having a stroke.

I actually kind of gave up on my dream of being on TV because of the sarcasm thing. Seriously. It’s too frustrating and almost always feels like a waste of time. I really don’t like pretending to be something I’m not, and I’ve done plenty of on-camera work, but it’s always been for NY news sites or “edgy” sites like Thrillist. They get me. If a TV studio approached me tomorrow and offered me a show, I’d take it, but only if they’re cool with me not smiling a lot. It’s just who I am.

Even when I was a dancer, the ONE main critique I would always get is that I didn’t smile enough. It used to drive me insane. I’m just not a bubbly person, so to most people, that means I’m angry and sad all the time. Not true. Lately of course I’ve been angry and sad, but I have reasons (see: bad breakup).

Just because I say things like “oh yea 2020 was a real banner year” (this is a sarcastic fact) and “yes therapy totally works – look how well I turned out” doesn’t mean I’m a negative person. IT’S A GD JOKE. Self-deprecating humor is an artform and I like to think I excel at it. Also, therapy really does work. If it didn’t, I wouldn’t be able to make self-deprecating jokes about my mental health.

To summarize, I think sarcastic people with a dark sense of humor get a bad rep. People think we don’t care, that we’re rude or mean, and that we don’t get excited about stuff. Just because I don’t literally JUMP FOR JOY when something good happens, doesn’t mean I’m not truly, deeply excited. And just because I make dark comments about drinking wine with my dead cats ashes as my new Saturday night activity doesn’t mean I lack compassion or sensitivity to dead cats. #RIPBobo

In fact, I’m one of the most compassionate people I know, and I care very deeply for the people in my life. I’m a selfless person and if you ask any single one of my friends, they’ll tell you that too. My ex-bf used to liken me to “a saint”. That was crazy and even though he sucks, he was right about me being a good person.

I’m not saying you should feel bad for us dark humored, sarcastic folk, but also, maybe? Imagine not getting a job just because you didn’t smile enough. Or getting into a fight with a friend because they misunderstood your joke. It’s frustrating, but again, you just have to work harder to find the right people for you. The ones who get you won’t leave you because you make death jokes at the dinner table during Christmas.