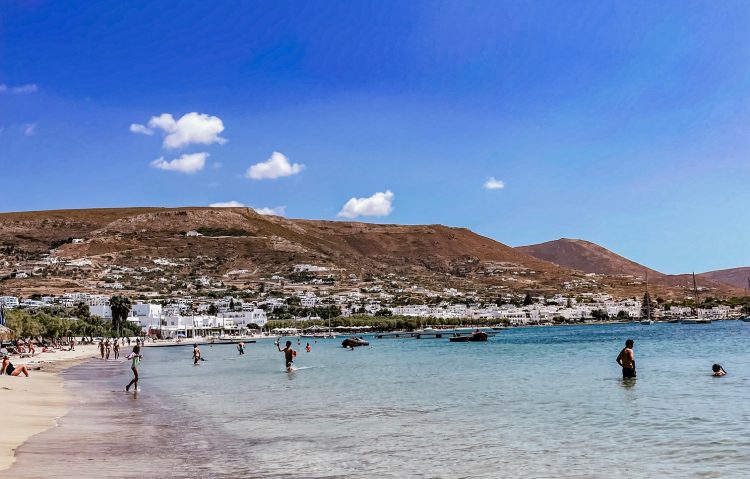 It’s taken me a minute to actually get to this post, so for anyone reading this, thank you for your patience! Greece is one of my favorite places to visit, but this was my first time in Paros (and Naxos), so this isn’t so much my “recommendations” as much as it was my “itinerary”. If I had to pick one over the other, I would pick Naxos, but I think our location had something to do with that. Read on.

Before you do that though, please note that some of the restaurant/club links are linked to the google search, as a lot of places didn’t appear to have websites. I figured doing the googling for you would be helpful.

We had a gorgeous Airbnb on a hill in Paros (link here!), with a pool, hot tub, epic views for the sunset and a wonderful host. She made us snacks every single day, see below. It was amazing. Only downside of the house (in my opinion), is it’s a bit further away from the town, and the first night we went out, we decided to walk. Walking is pretty big in Greece, so ladies, do yourselves a favor and leave the heels at home. That’s one of the biggest “pros” of Greece: you can go out pretty much anywhere in sandals/flats and no one will judge you.

Anyway. The walk into town felt manageable because it was on a downhill slope, but after a few drinks and food, the walk back (uphill) combined with the heat was pretty unpleasant. The next day, we rented cars. Smart decision. Another pro tip though: if you don’t know how to drive stick, you might be screwed – most cars in Greece are manual.

We were only there for a few nights, so while I have some recommendations for you below, there were definitely places we didn’t get to (like Antiparos, for example, which I hear is really fun).

The town near our Airbnb was a little sleepy for some reason the one night we went out, but we were too, so it worked out. At least I got some more pics of the stray cats that are literally EVERYWHERE in Greece.

The first day, we went to Livadia Beach, not too far from our Airbnb. We didn’t have chairs here, just brought some towels and laid out on the sand. Uncommon for my experience in Greece, but much easier to coordinate. We went to Tango Mar for lunch, which was delicious and right on the beach. Awesome tzatziki, fried calamari, and fries with cheese.

We had our Airbnb host call us a cab to go into Naousa that night, and we had dinner at Sigi Ikthios, which means “Silence of the Fish” in Greek. The food was delicious and the views are gorgeous since it’s right on the water in the harbor area. They literally brought fresh fish over to our table to select the ones we wanted, but if that’s not your speed, they have plenty of pasta and seafood options.

After dinner, we went to Agosta, a bar not too far from the restaurant. This part of town reminded me a little of Mykonos – cobbled promenades and tiny, winding streets dotted with restaurants, cafes, bars, and random shops (jewelry, clothes, etc). Agosta was PACKED, but we managed to snag a table for our group (which was large, 8 people), and enjoyed drinks and music. I’d say if you enjoy a lounge vibe outdoors, this was a good spot.

After that, we got a table at Linardo, which you may recognize from Instagram. It’s one of the most Instagrammed doorways in Paros, and I’d be lying if I said I wasn’t upset I didn’t get a thirst trap photo in front of that door. It’s a club though, so if you’re going to Greece this Summer/Fall 2021, read this first. Be advised, they checked our vaccination cards/ID’s at the door since our table was inside.

I wasn’t overly impressed with Linardo if I’m being honest, mainly because I felt like they tried to scam us a little. When we first got there, they gave us a menu with prices on it for bottle service (which we agreed to buy), but then came back with a different menu that had the same bottles but higher prices on it. Definitely made me feel like they were trying to take advantage of “the tourists”, which I didn’t appreciate, but they claimed it was an “old menu”. Sureeee it was. Regardless, it all worked out in the end. The table was nice and had doors that opened right onto outdoor space overlooking the ocean, crashing waves and all. Hard to be pissed in that setting.

After leaving the club at around 4 am (standard in Greece, if not even a little early), we stopped at Pita Frank for some gyros. Obviously. I was so hungry and drunk I didn’t even care what I was eating, but I remember wolfing it down in minutes so it must have been good. Though I’m sure there are even better options, we just didn’t have enough time there to do the research.

The next day, we took the cars and drove to a beach club called Viva Punda. This was an interesting place. First things first: the food was NOT good, so I don’t recommend eating here. When we drove up and saw a bunch of young folks walking in with backpacks, colorful beads and water bottles, I wanted to run. They looked like they were going to EDC. I was too hungover for that, but rejoice! For there are two sides to this beach club. One side is more chill with chairs/umbrellas and adults, while the other side has a pool with loud house music, a bar and the average age was roughly 19. Don’t forget, the legal drinking age is 18 there.

For lunch, we went to Halaris Ouzeri, a “fish tavern” in Piso Livadi; surrounded by boats on the water, this is another great spot for seafood. I had a tuna steak that was so thick, I swore it might have actually been a steak when first presented. The fried zucchini might have been my favorite though, don’t judge me. Also the phyllo/cheese/honey situation.

As I mentioned, we weren’t there long, so here’s another recommendation for you from a friend: Stilvi. This restaurant was gorgeous and I hear the food is amazing, but we couldn’t get a reservation for that many people.

Here’s a quick list of the places mentioned above:

Stay tuned for Naxos! That requires it’s own post. And if you have any suggestions for Paros, leave em in the comments!