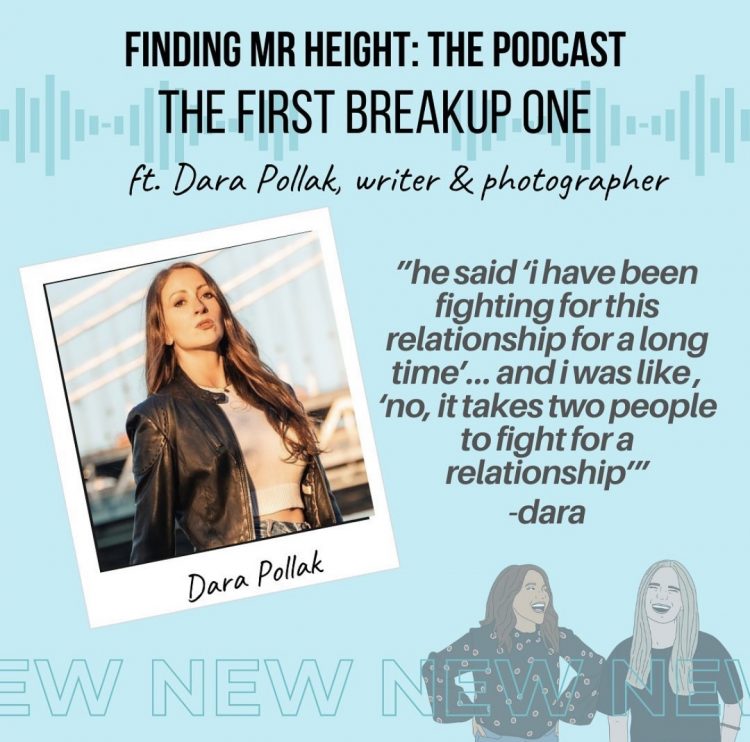 What a way to kick off the new year! Almost exactly one year after my big breakup, I recorded a guest spot on the Finding Mr. Height Podcast talking about relationships, my breakup, and all that fun stuff. BIG thank you to Ali and Roark, who put up with me and my rambling for a lot longer than intended.

It was a great interview but I wanted to answer some of the questions here so you can jump to the stuff you want to know! See below, and click here to listen to the episode! Also follow dating coach Ali’s IG and TikTok, she has great advice and text scripts to help you along your dating journey.

In hindsight, were there any signs you wish you had seen?

Honestly, not really. I think there might have been signs to him, but not to me; meaning that he was probably internalizing a lot of the issues and not communicating them. Outwardly, he always seemed pretty happy with me. He was thoughtful, kind, and genuine (or so I thought). Obviously there were some fights, but not a lot (in my mind). Perception is everything though, and I can only assume he felt very differently about the relationship than I did.

Did you feel like they were overcompensating right beforehand to hide their intentions?

Well he bought me a fucking Peloton for Christmas last year so…yea? Aside from that, I could see it a little now, but nothing wildly out of the ordinary. It really was a blindside and I’m sticking to that story, even now one year later.

How did you react in the moment? What questions did you ask?

You can read all about that here. But it wasn’t fun. Do not recommend.

How to deal with not having answers as to why?

It’s tough but I think reframing it is what helped me most. I think I mentioned in my blog, but it’s like being in solitary confinement – you have no information and you’re just going crazy, so you start writing your own narrative on those blank walls. Don’t do that. Just sitting with the unknown is the only thing you can do but it’s natural to obsess, so don’t beat yourself up. Time will help, as well as distance. No contact is beyond necessary for a bit. You won’t know how you really feel if you’re still hanging onto them and using them for comfort to get you through. That’s not a breakup, that’s just prolonging the pain.

What helped most: time or self care? Or something else?

Both. Changing my routine was so helpful. “Things I did with him” I changed to “things I do on my own that make me happy.” You want to fill that void with something that brings you genuine joy and/or clarity, otherwise it’s just a distraction. I also leaned into education; I’m someone who likes to dive in fully on the subject, but that’s not for everyone. Here’s a link to a recent post with some books and other resources I recommend. Also Season 2, episode 7 of Modern Love on Amazon Prime – really eye opening. It’s all about perception and just how differently two people can view a relationship.

Why do I still want to be with them despite all the red flags I can now see in hindsight?

That’s probably your brain holding onto the idealized version of them you’ve created in your mind, OR the person they once were to you. I did that for a while and it’s the pits. But you have to break free from that thought pattern and see who they are NOW. It doesn’t matter who you think they can be or who they used to be, how they’re treating you NOW is what you need to stop ignoring.

How to not obsess over the why (especially if they ghosted)?

It’s normal to obsess for a little, but after a while, you’ll get sick of it. You have to try and accept that this is how they are choosing to handle it, and you can’t force them to speak to you. Begging and pleading with someone who doesn’t think you are worth even a minute of their time should be enough motivation for you to stop obsessing. Easier said than done, and I know that’s hard to hear, but it is a fact. Them not wanting to speak to you most likely has ZERO to do with you and more to do with them, but that doesn’t make it any less painful. Unfortunately, you need to find comfort elsewhere.

When will I feel ready to date again?

You’ll know when you don’t feel like throwing up at the idea of having sex with someone else? Just kidding…ish. There’s a bit of that, but also when you don’t project your ex onto them. If you find yourself looking forward to dates and being open minded, then I’d say you’re there.

How do you trust again? I feel like I’m on high alert for signs now.

I think, again, you just have to believe that this was not a reflection on you. Even though you may have “missed the signs”, that doesn’t mean there’s something wrong with you. I consider myself a very intuitive, empathetic person, and I still had zero clue. Because what was presented to me was not the picture of someone who was unhappy, if anything it felt like the opposite. Obviously during one of our fights I thought maybe he was unhappy, but it was a fight! No one is happy during a fight, but we talked it out and I thought we were fine. Clearly, I was wrong. It’s good to listen to your gut, but challenge your thoughts. Ask yourself if this is REALLY a red flag with this new person or if it’s you projecting.

How to resist the urge to text them?

Ask yourself what you’re going to get out of this and play it out in your mind, realistically. Not the idealized version, the REAL version. If it’s a dopamine hit you’re looking for, do not do it. If it’s looking for answers, don’t do it. At least not when emotions are running high and it’s too soon. I reached out to my ex again in June/July, but that was after months of absolutely ZERO contact, not to mention I was just in a better place. I wasn’t afraid if he didn’t answer (he didn’t) and I just wanted to do it for myself.

Do you find yourself constantly checking their social media for signs of why they did it?

No because you’re not gonna find it there! A lot of social media is not reality. Things are not what they seem and what’s worse is that you WILL see something eventually that will either make you IRATE or break your heart all over again. I would literally ask myself “do I want to have a good day or a bad day today?” and I knew if I stalked his social media I’d have a bad day. It was actually a relatively easy decision. I obviously did it a few times because I’m human but ultimately, stay away. No good comes from it.

How to emotionally process when they start dating again, especially if you haven’t?

Everyone has their own path! Don’t compare yourself to someone else’s journey. Reframe it again. If you hear they’re with someone new, it’s natural to feel that pang of anger or sadness. But instead of thinking “what do they have that I don’t?” reframe it as “well, he felt that way about me at one point so…good luck to them!” Seriously, just because they’re dating again doesn’t mean they’re falling in love. And even if they are, that doesn’t have anything to do with you. You could be falling in love too, if you let them go.

Is there any coming back from a blindside breakup? Either as friends or getting back together?

Well I spoke to him very recently and while I don’t think we’ll be best friends anytime soon, I think the fact that I haven’t spoken a single word to him since March has really helped shift how I view this situation. I think you can do both, but I really believe that you need to not be in contact in order for that to happen in a healthy way. If you take time apart, truly, and you’re still missing them and they feel the same, then maybe there’s a chance to make it work. But you also have to think about what that REALLY looks like – again, not the idealized version, but the REAL version. Are you both willing to put in the work?

What if you want to get back together? Can you reach out?

You can, but you have to be prepared for the outcomes. Even the best case scenario in reality could look a lot different than the fantasies we create in our minds.

Why does this keep happening to me?

It happens to a lot of people, so don’t blame yourself. But if there are things you wish to work on, then try to identify them and do that. Invest in yourself and try therapy if you haven’t already. But remind yourself that this isn’t your fault. No one deserves to get ghosted! Ghosting is a coping mechanism for some people, believe it or not. Amy Chan talks about that a lot on her IG and I believe she will be on the FMH podcast next!!