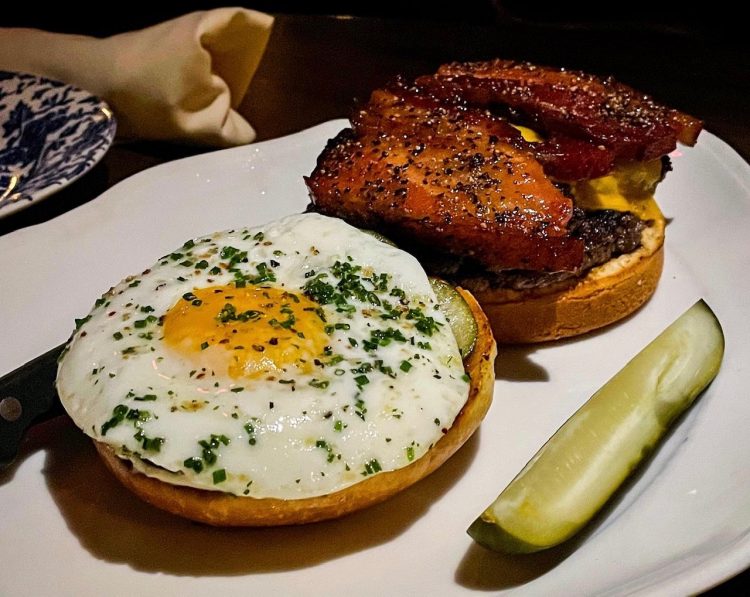 This original post is from my Substack Newsletter, Musings of a Misfit Creative. Sign up for that here! I won’t always double post them, but this one felt fitting for the blog too. Enjoy.

It’s a tricky question, but first you might be asking: who the hell is thinking about either of those things when you’re at a steakhouse?? Well, first off, I’d argue that “steakhouse” is a generous term for this place. “Steakapartment” is more fitting, perhaps. Second, you’ve clearly never had the burger at Peter Luger (but we can save that for another day).

4 Charles Prime Rib was brought to us in 2017 from Brendan Sodikoff of Hogsalt Hospitality Group, the same talent behind famed Chicago restaurant (and their more famous burger), Au Cheval.

Quick story: the first time I visited Chicago, I went straight from the plane to Portillo’s for a Chicago dog and cheese fries, then immediately after I took a Lyft and put my name down at Au Cheval for a single seat at the bar. I had drinks in between at the bar across the street (La Josie), and within an hour or so, I was sitting down to ingest one of the best burgers I’ve ever had. No one should eat that much meat, carbs, and cheese in the span of 4 hours but I like to play chicken with my digestive system. Did I feel lethargic and extremely unwell for the remainder of the evening? Yes. Was it worth it? Also yes.

Anyway. When I heard about 4 Charles a few years ago, I had to make it a point to go. They had that ridiculous burger on the menu and I was definitely in the mood to make myself sick again from eating too much.

Note: People have asked me how the 4 Charles burger compares to the one from Au Cheval in Chicago, and while I’ve only had it twice (from Au Cheval), I can safely say it felt very much the same to me.

Spoiler alert: it’s VERY hard to get a reservation though, and I do NOT subscribe to the eating dinner at 10 pm thing anymore, but unfortunately that’s likely your best bet. Once in a blue moon, I can do it, and this meal is probably the caloric equivalent to 37 Big Macs so it’s not something anyone is doing often. Live a little, I say.

Additionally, if “cool, hidden gems” are what you’re looking for, look no further. Well, actually, keep looking. As a New Yorker, I can safely say that it’s not that we want to live here for so long, it’s just that it takes us a very long time to find the cool places because they’re small and lacking signage. You can very easily walk past 4 Charles, and even once you get inside, it’s tucked away in a dark room behind a heavy black velvet curtain with the tiniest bar known to man. 10 tables, super dim lighting, and oil paintings on the walls. When I walked in, I expected “Rags to Riches” to start playing and Spider to get me a drink (if you know, you know).

All that is to say if you like old school New York meets underground supper club, you will love it here. I absolutely love everything about that particular ambiance and I don’t care how much of a douche it makes me. Sure, I may have had some trouble seeing where the bathroom was (up a set of incredibly narrow stairs, FYI), but that was either the lighting or the $19 dirty martini. Or perhaps a combo of both.

Before I visited, I consulted a few meat-enthusiast friends who had been, and all of them said the sleeper hit was the French Dip. Honestly, NOT my favorite thing on a menu anywhere, but I think I have come to the conclusion that I will order it at 4 Charles for the rest of my life if they let me. Reason being: it’s just really well executed and the meat is high quality.

Biting into a French dip and pulling out all of the meat with your teeth is the reason I never order a one – it happens all too often (one of the biggest problems I should have, right?). If you don’t know what kind of meat the place is working with, that’s a big risk because you could get stuck with rubbery, gray meat on dry bread. Absolutely not the case here at 4 Charles. First of all, it’s not roast beef, it’s thinly sliced (dare I use the word, “shaved”) prime rib. That beautiful beef is then dunked in it’s own cooking juices, swaddled in Swiss Cheese and tucked perfectly into a fresh-baked crusty hoagie from Parisi Bakery. Oh, and of course, there is horseradish dip on the side. And if you’re me, you will order fries on the side as well. It doesn’t come with it, because this is still a steakapartment and everything is a la carte.

The burger is in a league of it’s own, but I think it’s become trendy to hate it, so don’t be surprised if you hear mixed reviews. It’s what I call the Shake Shack effect: when it was rare, everyone pissed themselves over it, but then it became a national chain and started popping up in airports and all of a sudden it’s “garbage.” Can’t please everyone, especially the highly opinionated. The Au Cheval burger isn’t as rare as it used to be now that we have “Au Cheval Diner” and 4 Charles.

I will say one thing about this burger that may come as a shock, but I don’t think it needs the egg. Those two thin patties, the thick cut bacon, onions, pickles, dijon and mayo all come together just perfectly for me. The richness of the egg yolk? It’s nice, I’m not angry about it, but I certainly wouldn’t miss it if they told me they ran out of eggs. That said, if you haven’t had it before, I think it’s worth a try. You can even order it as an appetizer (seriously they will cut it 4 ways, it’s a thing). Plus, white glove service with a burger is not something you see everyday.

If you can get a reservation (usually only available via Resy), GO. Keep in mind they release reservations about a month in advance, and they go quickly.

Of course, all photos edited with my Lightroom Presets – $5 on Etsy. Because I think they’re great for photographers of all levels. 🙂