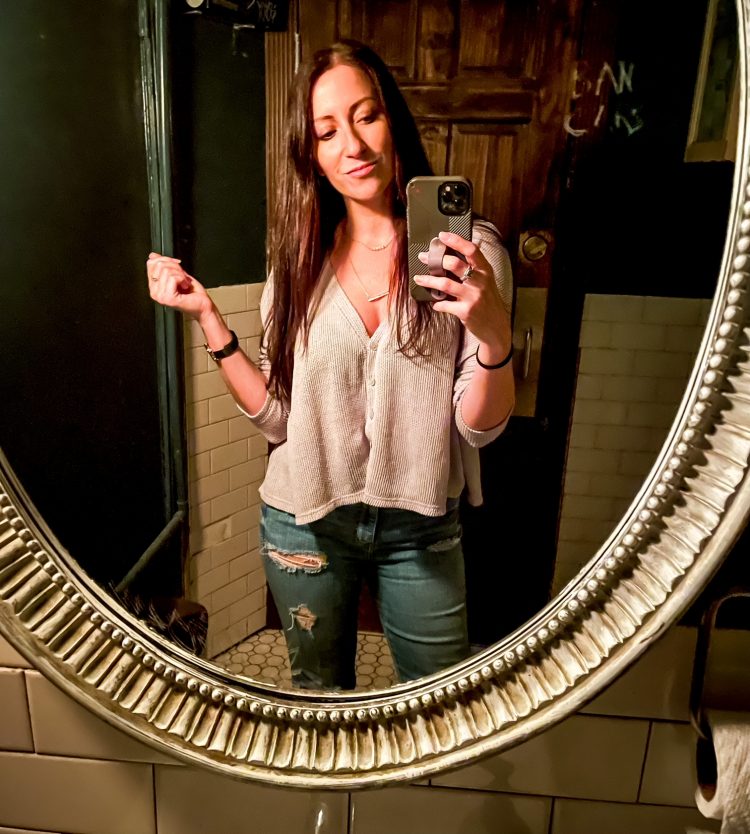 My birthday was this past Monday (4/11), and I don’t typically celebrate my birthday in a BIG way, but year after year, one thing remains the same: the self reflection induced anxiety rears its ugly head. HOORAY.

Ok so to unpack a bit…I don’t have any real, significant reasons for being sad about my age, but I’m definitely in a bit of a funk today. Perhaps it’s the simple act of coming off a birthday week “high” where I went out every single night with friends/people I love. But then I thought…shouldn’t I be happy about that?? Correct.

Another weird thing that’s got me bummed out? My neighbor is moving. This one is really weird to me because we’re not even close, so it’s not about that. But after some thought, I think it’s just a reminder that other people are moving forward and I feel very still? Yes, that has to be it.

I’ve never been one to be upset about a “still” feeling, and yet, here I am. I’m hoping that writing about this is going to spark some brilliant moment of self realization which leads me to feeling better. I think it will.

I’ve never put too much emphasis on my birthday because I think of it kinda like New Year’s Eve: it’s just another day. But it’s hard to ignore the number and the comparisons, especially as you reach a certain age. For context, I am now 38.

It’s something I don’t like to admit, but there really is this subconscious pressure that I “should be” in a certain place by now. And that certain place is “married with kids.” And it just got me thinking…if this wasn’t such a common ideal to chase, would we even be sad on our birthdays while we DON’T have these things?? Or would we just celebrate what we DO have and be satisfied with that? I just feel like we need to work on changing the narrative, especially for those of us who are “still single” and childless. Because I’m kind of sick of people giving me the sad face when I say I’m not dating anyone right now.

The fact that my older relatives are consistently on a mission to get me married is no help either. It doesn’t matter if I landed a new client that I’m excited about, or planned a fun trip with friends, it only matters if I have a partner or a baby bump. I just don’t get why it’s STILL perceived as “sad” to be alone, after all the moves we’ve made.

After my nightmare of a breakup, I CHOOSE to be alone, but I’m open to the idea of a relationship again. It’s just not something I’m desperately seeking. Does it get lonely sometimes? Of course. But there’s a difference between alone and lonely. I could very easily be out there dating every single night if I really wanted to, but I enjoy my solo time and I don’t always feel like forcing a connection with a bunch of strangers from a dating app.

Speaking of apps, can we also touch on how much technology has advanced, thus making it even EASIER to be alone?? For a society that still clings to the old school mentality of “you must get married and have kids or your life is meaningless,” the technology would lend itself to other theories.

You no longer need a man to hang that shelf or shovel snow, because you have Task Rabbit. You don’t need someone to cook you dinner, because you can order it with Seamless or cook it your damn self with HelloFresh. You don’t even need to leave your house to take a workout class, just jump on the Peloton and ride with 5,000 other people across the world.

If anything, the technology is saying “go on, be a hermit.”

I don’t subscribe to that either, mind you, because I think if the pandemic has taught us anything, it’s that we CAN do a lot of shit online without human contact, but we don’t necessarily WANT to. I have good friends online and offline, but most of the time, I’m choosing in person activities. Memorable experiences come from a life lived, not watched.

All that said, when you get to be a certain age, it becomes harder and harder to meet people in the wild. I don’t have an office or coworkers, I don’t go out as much as I used to, and I kinda know everyone in my extended friend groups. And guess what? Most of them are taken. Plus, nothing irritates me more than that friend who is constantly asking if you have any friends to set them up with. I don’t need to tell you this, but desperation is a stinky perfume. Enthusiasm is good, but there’s a difference.

Perhaps I’m done rambling now, but I’m just trying to put into words and give a voice to those of us out there who are “alone,” despite the fact that we aren’t, actually. I spent every night this week with friends and people I love having great times over great food, but because I stopped for a second and realized I don’t have a husband or a child, I started beating myself up. It’s fucked.

So I’m going to go to Homegoods, buy some scented candles and other shit I don’t need with my own damn money, then I’m going to order Taco Bell for just myself, watch a movie, then maybe have a glass of wine or two and pass out around 10:30.

And you know what’s funny? Most of my mom friends who are reading that are saying “OMG I’m so jealous.” Grass is always greener. I know they wouldn’t trade in their kids for Taco Bell but you get my point. Just be happy with where you are and remind yourself it’s ok to be still.

Look at that. Spark of self realization: achieved.