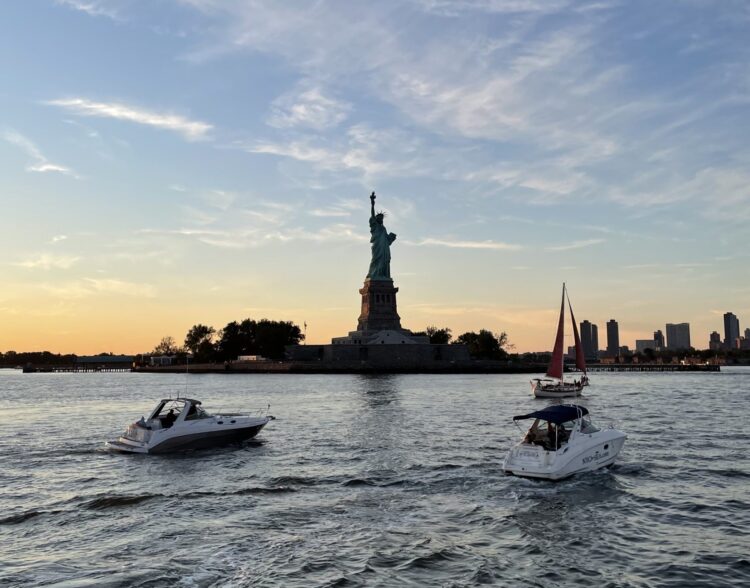 Ok so…this is actually an excerpt from this book I’ve been writing for years. It’s mainly just essays from pivotal points in my life, mixed in with some recipes that were inspired by the stories. Where do I get off writing a book about my life thinking that anyone will give a shit about it? I have no idea, but that’s what writers do sometimes. Some of my stories read like a GD movie, and writing is one of the few things I’m good at. Let me know if you’d like to read that book because I could use the motivation to actually finish writing it. Insert “lol” here but I’m dead serious.

Anyway, this is obviously about 9/11/2001. I was a senior in High School, cutting class when it happened. Don’t judge me – this was very much my “rebellious teenager” phase. Enjoy.

Just another day at school. I was a senior and decided this was not the year I would get my shit together. I don’t think I even went into my first class. I know I went into the building, but I think I snuck out the side door as I did fairly regularly, and told my best friend at the time to meet me outside and we would go get our nails done. I think that was the big plan for the day. Usually, the plan was sleeping.

I didn’t hear from her and this was before texting was a thing, so I was just basically chain smoking cigarettes outside (I said don’t judge me) waiting for her to call me on my cell. When she finally did, the doors flew open and I saw everyone leaving school, so I got distracted and didn’t pick up.

She found me and said, “do you have ANY clue what’s going on??” and I obviously did not, considering I’d been out there waiting for her. “Ummm, no?” I replied.

She looked worried and said “we have to go home right now”. We jumped in her Black Honda Civic that smelled faintly of cigarettes and Curve. She put on the radio…someone said something about a plane crashing into the Twin Towers. Yikes. “That’s not good,” I thought to myself.

Full disclosure here. I was a little self absorbed at this point in my life, not to mention I didn’t really understand the full context of what was happening. This was a time before social media, before everyone knew everything within the span of 5 minutes. I thought it was an accident, I had no idea it was a terrorist attack. I don’t think the news did either yet. I was just kind of like “well that’s crazy and awful, but I’m going to get my nails done”. I said it before and I’ll say it again, don’t judge me.

Anyway, staying true to my word, I went to the nail salon on Bell Boulevard in Bayside to get my nails done. No one was in there, which probably should have been red flag number one, but I’m great at ignoring red flags (see: dating life).

After about 10 mins, I looked up at the TV and saw the coverage of the whole incident on the news. It hit me. This was done ON PURPOSE?? This was an ATTACK?? I felt my heart rate increase and my eyes darted from one TV to the other, hoping for a different report. It was the same across every news station: a terrorist attack on America. This wasn’t a “media bias” thing.

The women in the nail salon looked scared as they looked at each other and then at me. I told them to stop my nails. I think they made it up to one full hand. And I used to get “tips” aka acrylic nails, because if you’re from Queens that’s just what you do, so you know how long that shit takes. Anyway, I knew by that point I had to go home. I called my Dad, who lives and works in Manhattan, and thankfully he was ok. I paid them full price for one hand, and I RAN home. Like Forrest Gump type shit.

I remember just watching the news broadcast in my bedroom with my boyfriend. Then with my mom. All of us just quiet. Just feeling that fear. Not really knowing what’s going on but knowing it’s not good and people are dying. And that nothing would ever be the same. It’s an eerie feeling that still runs through me every day on this day. I remember it like it was yesterday and I don’t think that will ever change.

What I also remember pretty vividly, is how everyone seemed to come together after that. New York has never put aside its petty differences before like this, at least not in my lifetime. This is a place where people yell at you for getting on the express checkout line when you have more than 10 items in your cart. But after that day, we metaphorically held hands and honored those we lost. Until we knew the next steps, that was all we could do.

This may be a weird example, but it stands out to me and felt significant at the time. There is a big street in Flushing that we would drive around at night, for fun, and that street is Francis Lewis Boulevard (“Franny Lew”, if you will). We would literally get dressed up to drive up and down a main thoroughfare for hours. Sometimes we’d pull over at a deli and eat sandwiches. It was glorious.

The thing that was touching that night, was the way all the kids in the neighborhood got in their cars, business as usual, and headed out to Franny Lew. But this time, we flew our American flags high in the air, out of the windows of our cars. We painted the windows with the American flag. We blasted the national anthem and any America-themed song we could think of. Franny Lew was dripping with all sorts of American patriotism.

But my favorite part? The guys on the side of the road holding up big, homemade signs that said simply this: “Honk For America”. It was kinda dumb and kinda poetic at the same time. Kinda America, no?

I’m talking full on Queens and LI bros with glistening blow outs, fake tans, heavy chains around their necks, and button downs. They looked like they were going to the club, but they were just standing on the sidewalk, trying to remind us that we’re all in this together.

And so, we honked. We honked a lot. Normally a sound that would drive me absolutely insane filled me up with pride. I had tears in my eyes.

We circled Franny Lew for hours. We came together the only way we knew how and knew it would be a long road ahead. Then we got McDonald’s and had a feast on the hoods of our cars.