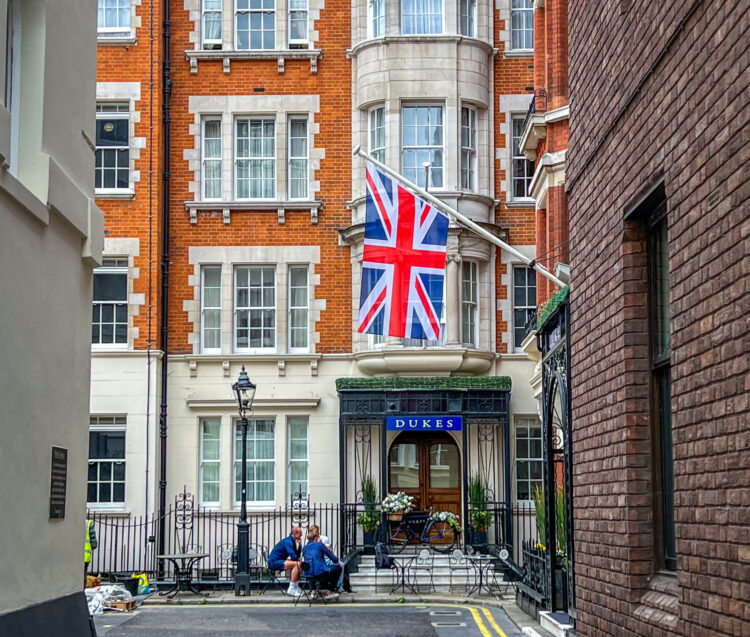 I’m one of those people who likes to plan my trips around my meals. There have been times when I created a spreadsheet of places that I wanted to visit, color coded by neighborhood and ranked by order of importance.

This was not one of those times.

This was my second time visiting London and it was a very last minute trip, so, I did what I could in the little time I had (5 nights). And I STILL didn’t get to have proper fish & chips!! Listen, I had breakfast at my hotel almost every day (it was cheap and easy), and by the time I got moving, I wasn’t hungry enough for lunch yet, so I would just wait for dinner, which was planned most nights. Or it was the opposite issue, where I skipped breakfast at my hotel, and then would be hungry for breakfast food around 11 am, but I didn’t want to eat fish for breakfast. Make sense? Cool, didn’t think so.

In the meantime, below are a few places I really liked, complete with links and some hopefully helpful tips, should you find yourself in London anytime soon.

And here’s a few places that were recommended a bunch that I didn’t get to: Dukes (for the martini, supposedly they invented it), The Red Lion (a good “pub”, I hear), Noble Rot (for food, many people suggested it but we couldn’t get a res). Oh and be advised, we tried Dukes but you have to be dressed somewhat nicely. Men need a collared shirt or jacket, no sneakers or “trainers,” as they say.

Where I actually went:

Dishoom – If there’s one thing London does really well, it’s Indian food. And I’m happy to report that Dishoom still holds up as one of the best meals I’ve ever had. Everything they do here is just executed amazingly well. Usually when a restaurant has a slew of locations, I expect the quality to take a nosedive. But nuh-uh, not here. We ordered seconds of nearly every dish we had and that’s not a joke – specifically the Chaat, the Samosas (lamb ones were incredible), and the Dal. The portions are on the smaller side, so it’s not as insane as it sounds.

Even with that amount of food, the bill came out to under 200 pounds for 5 people, including 2 bottles of wine. Not to be missed.

Sketch – this was my second visit to Sketch for “High Tea”. Situated in an old Townhouse with multiple rooms (with different themes/decor in each one), we sat in “the Gallery,” which is very pink and gold. Bold and colorful art pieces hang from the wall, while a group of violinists play modern music in the background. Very Bridgerton. It’s expensive, but it’s certainly worth it for the experience.

The food is actually good too, especially the “egg & soldiers” dish. It’s two pieces of buttery comte “fingers” that you dunk into a semi-cooked egg yolk/comte cheese mornay concoction. Served with a small scoop of Osetra caviar, it’s rich and decadent, and you will want to lick the inside of that china egg (below).

And speaking of eggs, I think the bathrooms with the egg-shaped toilet pods (I like to call them Piddles Pods) are the draw here. Unlike anything else I’ve ever seen. But if whimsical Alice in Wonderland vibes over a tower of delicious tiny sandwiches, eclairs and macarons are your speed, you’ll love it. Oh, and don’t worry, you can order champagne in addition to your tea.

ALSO – I HAVE NEVER HAD MORE FUN WITH A WEBSITE IN MY ENTIRE LIFE. JUST GO HERE AND PLAY WITH IT. YOU’RE WELCOME.

Padella – I have been DYING to try this place for their famous pici cacio e pepe, but last time I was in London, I got there too late and couldn’t wait it out. It’s one of those “there’s always a line to get in” kind of places, and I don’t really love that. Perhaps this is just me, but when that’s the case, it makes my expectations way too high. If the place was a normal restaurant that didn’t have all this hype around it, I would probably be way more blown away than I was. Like, do not get me wrong, that pasta was amazing – unique texture, perfect cheese distribution, and peppery bite. I ate the whole dish, something I rarely do, BUT the rest of the menu seemed kinda meh to me. The appetizers section was like, olives, salami, and burrata. Good quality but nothing inventive or impressive there. Sorry.

But look, if you want to have some seriously delicious pasta in London, go early before they open at 4:30 pm, scan the QR code to put yourself on the virtual wait list (what a time to be alive) and wait for the text. We got in shortly after they opened at 5 pm. And if you’re hungry while you wait, the restaurant is just outside Borough Market, more on that below.

Borough Market – this is like an outdoor food lover’s paradise. Specifically if you enjoy cheese, chocolate, and bread. I mean, who doesn’t?! There are also plenty of vendors that serve up actual dishes (risotto, paella, raclette & potatoes), but if you’re just walking around and need to stop for a quick nibble, a souvenir, or a cheese sample, this is the place. And you MUST swing by Bread Ahead for their raspberry doughnut. Or any of their doughnuts but blackberry/raspberry have been my faves and I’m not even a jelly doughnut fan. These are different. NO shortage of jam in these bad boys.

Fallow – ok so this one took me by surprise, and I highly recommend checking them out if you’re in London. It’s a relatively new spot not far from Picadilly Circus, and they put a strong emphasis on fresh, sustainable cooking. The corn “ribs” might be one of my favorite bites of 2022. Little nubs of corn curl up when fried, then they’re dusted with this epic kombu seasoning. Salty, crunchy, savory – amazing. Could eat those every day. They gave me a jar of the kombu to take home too.

Try their mushroom parfait too – if you like chopped liver pate or anything of the like, this is similar, but totally vegan and made from shiitake mushrooms. It was incredible and you won’t miss any of the animal fat.

I know I’m making this place sound vegan, but it’s not. I had their burger for my main and it was delicious and simple. They are also known for their regular ribs, but the corn ones sounded too intriguing not to try. Sit at the chef’s counter if you can and watch the action, and have a frozen marg or two!

Balans Soho – after the Taylor Hawkins Concert, it was pushing past midnight and London doesn’t have TOO many late night dining options, so we found this place and decided to give it a shot. They have a doorman situation, which is a little odd, but we showed up close to 1 am and only waited about 5 minutes for a table. His attitude was shitty but I was too hungry to care/ruin my chances at getting food. Once inside, the music was bumpin’ (but not so loud that it was annoying), and the drinks were flowing.

They serve all day breakfast and other classic diner type dishes. So we got eggs, pancakes, and a quesadilla. All really good, only thing I could have done without was the caramel coating on the pancakes. If they could do regular ones, I would have just asked for that.

Punch Room at The Edition – ok so this was actually kind of a last resort that turned out to be really good. We were wondering around Soho popping into bar after bar, looking for a combo of “ambiance + food + maybe a place to sit” and this was where we landed. It has speakeasy/library vibes with light music, great cocktails based off of various teas, and the waitstaff knows their shit. The insane book of cocktails is a little overwhelming, so just tell them what kind of booze/flavors you like and let them recommend something.

The snacks are pretty standard hotel fare, but executed really well: truffle arancini, burger, mac n cheese, etc. Oh, and they give you a tiny bowl of goat cheese popcorn to snack on with your drinks. I recommend for a nightcap or a date, not for starting your night.

Old St. Records – this was a really fun place to go for live music in Shoreditch! I only have this one pic of myself below on the staircase so I apologize for lack of content here. A friend who lives there said it was fun so we thought we’d check it out. Not a lot of tables/seats, but there’s a bunch of high tops directly in front of the stage, and we got one of the little banquettes on the side. The drinks were good and the music was too – pretty loud though, so if you plan on talking a lot, I wouldn’t recommend it. The only time I could hear my friends was when the band took a break.

Cahoots – this cool bar is a speakeasy in a former railroad station. You need to make a reservation in advance, and if you do, try to make them for the “Underground” part which appears to be the more in-demand of the three sections of the bar. We were on the ground level aka the “Ticket Hall,” but it was still a cool vibe. Very 40’s, with a big old station clock, creative cocktails served in tins or kitschy cups, and vintage ads everywhere.

Copita – stopped in here for a break and a much needed snack. It’s a tapas bar in Soho and not far from Leicester Square. I haven’t eaten a ton of tapas in London, but I really enjoyed this spot. Casual but still refined, the jamon iberico was really meaty with not too much fat (my main gripe with prosciutto), and you can’t go wrong with the potato croquettes.

The waiter recommended this “presa iberica,” which looked like steak but it was actually pork. A specific cut between the shoulder and the loin, served with this slightly sweet and peppery “moruno sauce” underneath, it had a perfect crispy char on the outside, and tender on the inside. And don’t sleep on the empanadillas with curry yogurt – filled with spicy sobrasada, they were like really high end Hot Pockets aka they will burn the shit out of your mouth if you’re not careful. But it will be worth it.