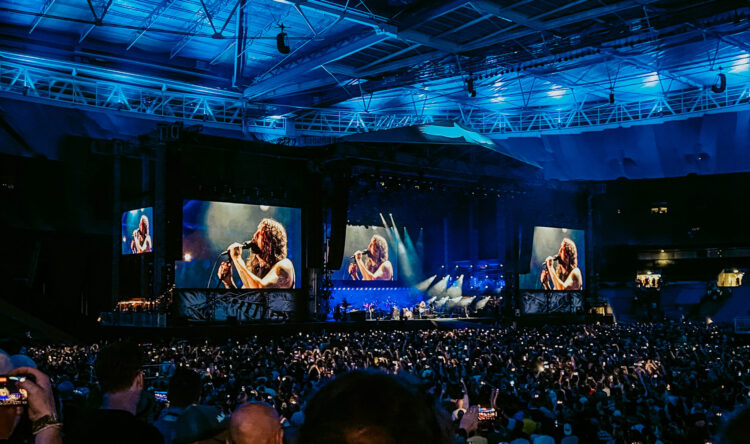 As some of you may know, I took a quick trip to London last week and just got back yesterday. I am still a little jet lagged and tired from all the running around, but I had a few thoughts that I wanted to put on paper (or screen). And there’s nothing I love more than pontificating about life when I feel inspired to do so, which happens rarely these days, so I’ll take what I can get.

One of the reasons I went out to London was in hopes that I would get tickets to the Taylor Hawkins Tribute Concert at Wembley Stadium on 9/3. Taylor was the drummer for the Foo Fighters, one of the great bands of my generation (in my opinion). The tickets were insanely expensive here in the US for crappy seats, so it seemed like a long shot and I was basically giving up hope. But, thankfully, one of you kind followers DM’d me and said that Ticketmaster UK released a bunch of tickets that Wednesday, a few days before the show. I was already in London, but I told my friend (who wanted to come with) and they weren’t outrageously expensive, so he scooped two tickets for us and booked a flight simply for that concert. That’s high level dedication right there.

Long story short, it was probably one of the best concerts I’ve ever been to. So many rock legends were there – people I never thought I’d have the chance to see live – and I felt really grateful. I find myself, still, looking at my own videos and tearing up at certain moments; even thinking about it gets me a little misty. And I think that’s a testament to how much music can really move you.

One of the moments that will be burned into my memory forever was Brian May from Queen singing Love of My Life. The entire stadium was singing along with their hands in the air, phones lit up. I can hear it in my head and my spine tingles a bit. In that moment, I started thinking about the love of my life, and surprise: it wasn’t a person. In fact, it wasn’t even just one thing. It was music, food, and dance. I promise this comes full circle so just stick with me for a minute. And here’s a clip of it I posted on Twitter.

Some of you who follow me closely probably remember when I started the whole “misfit creative” journey. Well, one of the reasons I identified with that term was because I felt like I had more to talk about than just food at this point in my career. Food is not the only thing in my life that brings me joy, and if anything, it was something I discovered AFTER I lost my other great love, which was dance. The long version of that can be found here, and the very abridged version is that even though it wasn’t lost permanently, it was no longer a career trajectory, which led me to discover my passion for food. And that’s sorta how I got here.

I consider myself a multi-passionate person that pulls inspiration from a lot of different places, and I wanted to feel free to share it when I wanted, how I wanted. Not an easy task when you’re at the whim of a very temperamental algorithm, either. But, when I made that decision, I knew that it wasn’t going to be easy. So for those of you who stuck by me, and to any new people who followed, I really appreciate you. Because at the end of the day, this is my art. And being creative can be both very fulfilling and very draining at the same time. I haven’t even felt inspired to write in months, until now.

Anyway. As I was watching him sing, it made me think about the loves of my life. Music might actually be my first love, dance was a close second (can’t have dance without music), and food was third.

I remember falling in love with music at a very young age. That’s why my music taste is so “odd” to some people, because I was listening to whatever my parents listened to, which was a lot of old school stuff like Frank Sinatra, The Beach Boys, Gipsy Kings, Patsy Cline, and Motown was huge for me. I have a whole playlist on Spotify with the Four Tops, The Supremes, The Temptations, The Jarmels, etc. I actually didn’t start to appreciate Classic Rock until Junior High/High School, when I discovered Led Zeppelin through the magic that was Napster. Now, I’d consider Classic Rock as probably my favorite genre overall.

But I digress. I reallyyyy started thinking deeply about this and here’s what I came up with. There’s just something about music, as it pertains to the experience, that feels like a very different art form than food or cooking, or anything else.

Music, I think, has the ability to transport you to a different time and a different place. Food, I’m not so sure that’s what it does. It’s special in it’s own right, but it’s very grounded in the now. Music can take you back in time to a very specific place in your life and make you feel something. There’s a reason why people cry when they hear certain songs, or feel their arm hairs stand up. I don’t think people cry when they eat. We smile, we feel joy, but it’s different. It’s not a release. And to me, I think it’s because there’s a difference between joy that you feel in the present, and joy that you felt in the past that you get to relive. THAT’S what music does. And it’s not always joy, obviously, but it hits on this nostalgia in a way that nothing else really can, and there’s a bit of melancholy that comes with that. Hence the tears. I didn’t expect to feel so many things at that show, but I did. So did Dave. Here’s another Tweet vid from the show:

Another thing I thought a little too much about? How we really only celebrate someone’s talent when they’re no longer able to share it with the world. When someone dies, that’s the moment when people come out of the shadows and say what they really think. And it’s usually good things. But when they’re alive, I think they hear much more criticism than praise.

It’s like someone is standing behind you, whispering in your ear, “be better than this. What if someone makes a documentary about you one day? What will your legacy be?” It’s a really dark and probably intense way of looking at it, but I excel at that sorta thing.

I’m just saying…it’s sad that a lot of people didn’t even know who Taylor Hawkins was until he died. And his band put together this huge concert in his honor…but would they have done that if he were alive? Maybe it’s time we start celebrating people while they’re still here. Telling them how we feel instead of waiting for a tragedy. I don’t know. Just something I was thinking about.

I also watched The Long Promised Road on the plane, a documentary about Brian Wilson of The Beach Boys, and Hawkins happened to make a few appearances in it. Sadly, one of his quotes was “I think it’s safe to say that creative people are usually sensitive people. And that door to drugs and alcohol is an easy one to walk through.” And he died the following year from an overdose. I think sometimes we hear their music but we don’t listen to their words.