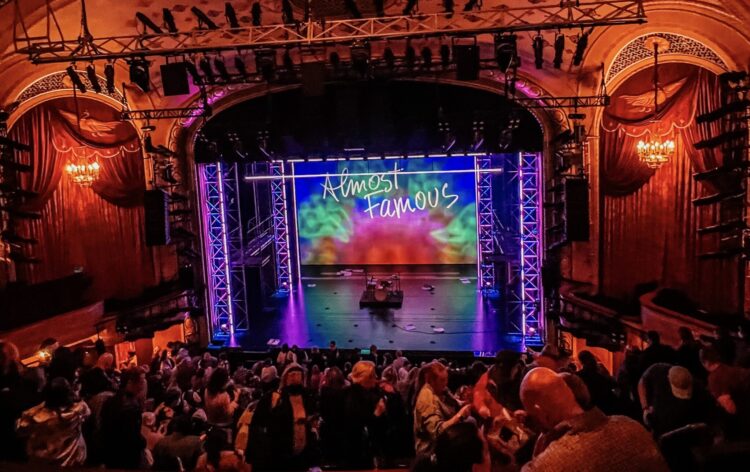 I think it has legs. Not to mention my claim to IG fame basically started when I discovered my superhuman ability to hold unusually large sandwiches in one hand. I dubbed it the #sandwichclaw. Shout out to Anthony & Sons Panini Shop for this monster.

Eventually I took on other items like donuts – stacking them as high as I possibly could – striking a fine balance between grip and weight distribution. I can’t balance a checkbook but I can balance two chicken sandwiches in one hand. Thankfully the former is quite literally no longer necessary. Not sure the latter is either tbh.

But I digress. I had to jump on here and write a little about Almost Famous the Musical, because the movie is something I hold very near and dear to my heart. It’s my favorite movie of all time (no exaggeration), and that’s mainly because of the music and the fact that I was in my late teens when it came out. The whole coming of age thing resonated pretty hard at the time. For those of you who know me, you know I love classic rock, and Led Zeppelin is probably my favorite band ever. Well, Almost Famous was one of the only movies ever that was granted permission to use their songs in the film. First, a little background on the movie…

Almost Famous is semi-autobiographical – the story is based on Cameron Crowe’s life as a teenage journalist for Rolling Stone. Insert extreme jealousy here. He got to travel with and interview bands, one of which was Led Zeppelin. According to this NY Times piece, which gives you a lot more information about the backstory, the other band was the Allman Brothers.

Now that you’re caught up, I’ll share that I peaked earlier this week when I got to MEET Cameron Crowe. I somehow made IG friends with the set designer for the show (shout out to the super talented Derek McLane!) and he introduced us. Blurry selfie below. I cannot stress enough how much I hate night mode on the iPhone because it always, always comes out like shit. And you know what Cameron said to me? He said “oh, I know night mode well. But you know what? Think of it as 5 more seconds we have with each other.”

Anyway. The show was great. Casting was done really well – Rob Colletti as Lester Bangs was probably my favorite – Philip Seymour Hoffman would have been proud of that performance. My only complaint, which is barely a complaint, is that I would have enjoyed more covers of the classic rock songs that appear in the film. In this Vanity Fair piece, Crowe talks about how they didn’t want it to be a jukebox musical, and that decision was not an easy one to make.

I was just glad they kept a few key songs and scenes – like when everyone sings Elton John’s Tiny Dancer on the bus. I have seen the movie no less than 50 times, and that part still makes me tear up. The airplane scene was really cool too – no spoilers here – but just trust me.

Now, onto the sandwiches. All’Antico Vinaio is a transplant from Florence, Italy, and it just so happens that they’re opening a second NYC outpost in the West Village. IT’S ALL HAPPENING.

The bread, the mozzarella, the prosciutto…next level. I had the “La Summer” (prosciutto, mozz, tomato, basil) and the “Venice Beach” with roast beef instead of turkey (tomato, mozz, and added avo). I’d like to point out the latter wasn’t my choice, but it was delicious so I wasn’t complaining.

Honestly, it’s one of those things that’s hard to explain WHY it’s so good, but it is. The bread is salty and crunchy, but airy in all the right places. The mozz is soft and melts in your mouth. These aren’t complex ingredients or supremely unique combinations, but they’re simple, quality, and executed perfectly. Not much more you can ask of a sandwich.

The line is almost always out the door, and if you happen to be in the Times Square area, you know that there aren’t a ton of good options. Well, this happens to be a GREAT option, and it’s one block from the Bernard B. Jacobs theater, where Almost Famous is playing.

Go see the show. Have a sandwich. Thank me later.