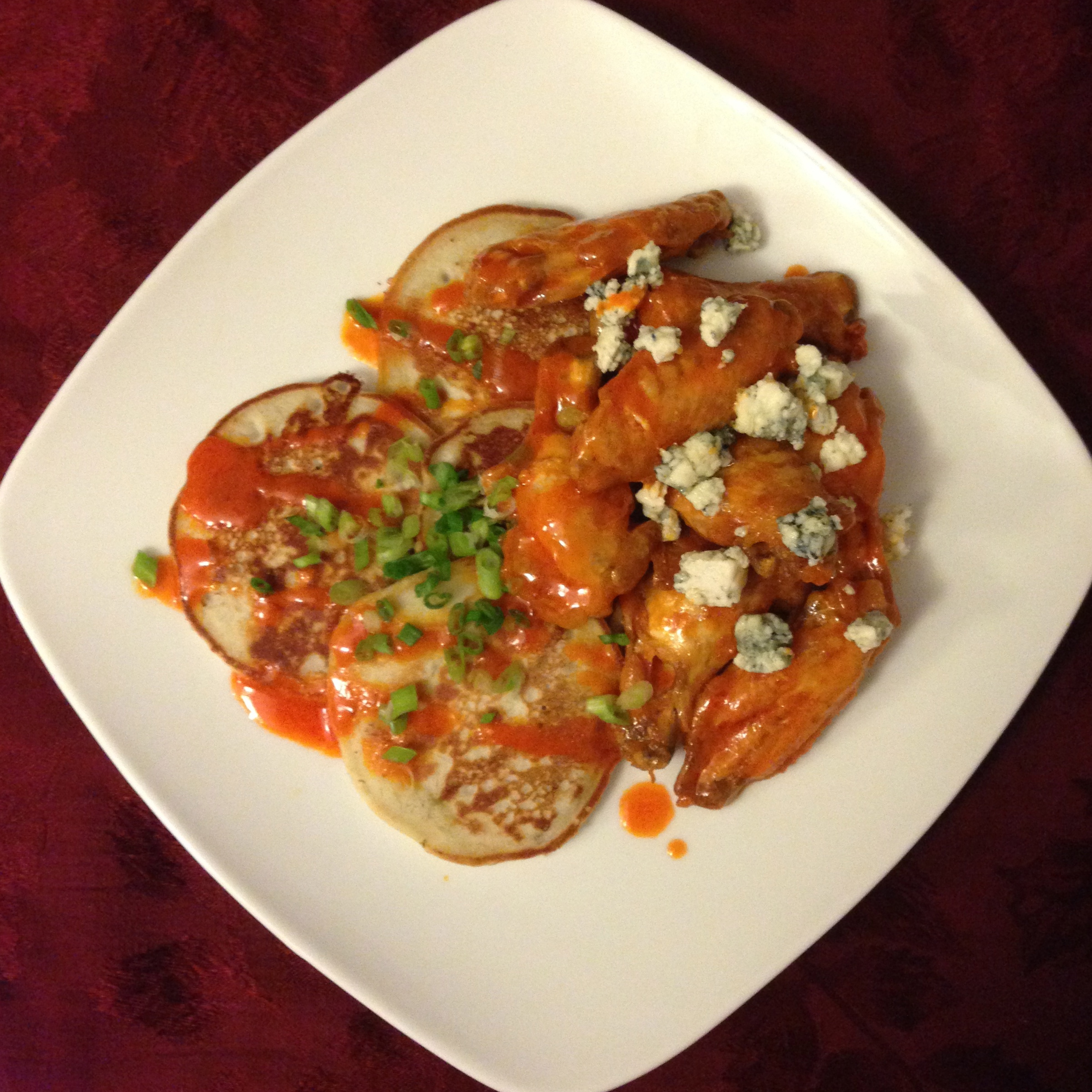 Everyone knows about fried chicken and waffles. I’m not going to hate on that, because I think it’s delicious, I just know that if there is one thing I’m good at, it’s coming up with new twists on recipes. So here you have a twist on the classic chicken and waffles, aka hot wings and pancakes.

I wanted to make wings because well, I make damn good hot wings. So take the recipe here and make those for your next Sunday Funday or the Superbowl; I have a massive Superbowl party every year and everyone always asks me how I get them so crisp without a fryer. So now you know: I call it my “boil & broil” method. Sounds weird, I know, but trust me, this is an excellent way to make them crispy without frying them. I love frying as much as the next guy (or gal), but I like this recipe and I’m sticking with it. The meat is juicy and falls off the bone while the skin gets super crisp – it’s just perfect all around.

Then I wanted to try something different as an accompaniment with my wings, mainly because I hate celery. So I thought I should have a carb of sorts. Potatoes? Could. Fries? Also could, I guess. Then it hit me: pancakes! If there’s chicken and waffles, there can be wings and pancakes. And also, I don’t have a waffle maker. So I decided to make savory blue cheese pancakes.

You don’t want to get inside my head. But you can trust it for food. The result? It was better than I even thought it would be, and I even used the Aunt Jemima pancake mix. Sorry I’m not sorry. Plus, I had a taste tester (Hi T!) and I don’t want to toot my own horn or anything, but she called me a wizard. Ok, maybe I’ll toot my own horn a little.

Recipe Note: The package of chicken I used was SLIGHTLY larger than 1 lb (1.22), and obviously you can double this as needed.

1. Boil the wings. This part is easy but yes, takes a bit longer than say, frying. Fill a large pot halfway with water and add the first 5 ingredients (spices and chicken). Turn to medium-high heat, bring to a boil, and then boil wings for 15-20 minutes. When they’re done, remove them from the water and set aside on a baking sheet coated with cooking spray.

2. Broil wings. Pop them in the oven on the high broiler setting for 15 mins. Flip the wings with tongs (be careful as I have given myself a chicken-steam burn whilst doing this) and broil the other side for another 15 mins until nice and golden crisp. For extra crispness, you can obviously broil for longer. 3. While waiting for the wings to cook, make the hot sauce. Also super simple. Add butter and hot sauce to a small saucepan and melt together. If you like a thicker sauce, you can let this cook for a bit longer and it will reduce. Check on wings and remove them if they’re done.

4. SAUCE THOSE WINGS. Add wings to sauce and shake around in a bowl or container with a lid. NOM NOM NOM. 5. Make the pancakes according to the box instructions. Add blue cheese crumbles and mix together, trying to mash some of the cheese crumbles. You want the mixture to have a slight blue tinge to it. Sounds weird, but that just means extra cheesy goodness. Cook 4 at a time on a flat top griddle. You know one side is done when the pancake mixture on top starts to bubble. It’s a very quick process. 6. Arrange pancakes on a plate and place some of the hot wings on top. Add some crumbled blue cheese and scallions on top, drizzle with more Franks Red Hot, AND HAVE AT IT. These wings are so tender that when you take a bite the meat falls right off the bone – I promise you won’t miss the deep fryer (and that’s saying A LOT coming from me).

7. Continue eating these until you feel like taking a nap and your mouth is burning from the hot sauce. Oh and I served this with a nice mesclun salad on the side, because life is about balance. There was a warm bacon vinaigrette on the salad, but whatever. Leave me alone.