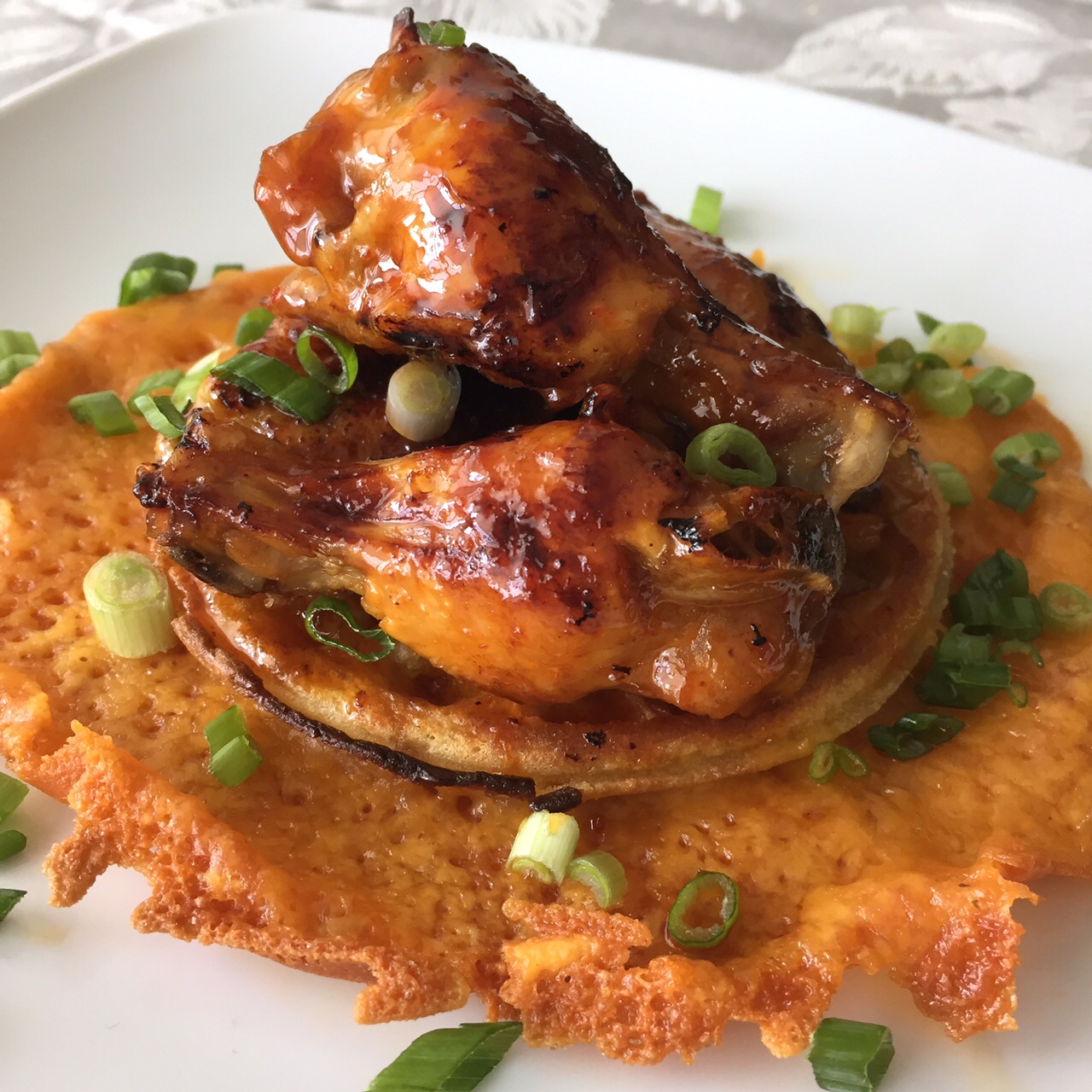 Summer is just around the corner, so I’m feeling like NYC in July: HOT AND STICKY. I came across this new hot sauce called Fix, and it’s like sriracha but a bit sweeter and maybe a touch more garlicky. I really liked the flavor and immediately upon tasting it, the thought of honey-sriracha wings popped into my head. Here are some things you should know about my wings: I use the “boil & broil” method, I don’t fry them. I know you’re probably like wait…you…don’t…fry…everything?! I know, I know. I tried this way a long time ago and I’ve been kind of hooked ever since. Yes it takes a bit longer, but there’s no frying so you can feel slightly better about them (from a health perspective), and the meat just falls off the bone. Trust me, when you boil them first, it’s like brining – the wings get infused with salt and flavor from whatever spices you use and become tender from the inside out. NOM. Here’s something you should know about sriracha & honey sauce: it burns. So be careful when you’re adding it to the wings and then broiling. Keep a close eye because the sugar burns. I didn’t mind a little crispness here and there, but if you want to avoid those black marks entirely, just broil them until crisp and toss them in the sauce when you remove them. Frankly that’s how I make my hot wings and it works just fine.

Also I served these over a cheese/waffle blanket thing. I don’t know why, but I felt that putting cheddar cheese into a cast iron skillet and then placing a waffle on top would be a good idea. And you know what? Carbs sitting on top of melted cheese is really never a bad idea. Either way, these are delicious and I hope you like them as much as I do. Also, find yourself some of this Fix hot sauce stuff – it’s worth keeping a bottle in your fridge next to the rooster sauce. Fix has come to snuff the rooster. HA GET IT?! Because Alice in Chains… I’m old.

And turns out that word is spreading because it’s sold out on the site – but here it is on Amazon.  DO IT.

1 tsp Flavor God Garlic Lovers Seasoning (optional, garlic powder is good if you don’t have this)

A bunch of shredded cheddar. I didn’t measure this. Sorry.

1. Boil the wings. Fill a large pot with water 3/4 of the way and add all the seasonings (salt, cayenne, chili flake, Garlic Lovers, brown sugar). Add wings to the pot as well and heat over high heat. Bring to a boil and then continue to boil them for another 15 minutes. Total process with boiling takes roughly 40 minutes. Depends on how quick your stove gets to a boil… 2. Make the sauce. Add all 3 ingredients to a small sauce pan and stir over medium heat.Remove from heat but put the lid on to keep warm. 3. When wings are done boiling, line a baking sheet with tin foil and spray with cooking spray. Remove the wings from the pot with tongs. Place wings on the baking sheet and put under the medium-high broiler (I put mine on level 3 and 4 is the highest on my oven, to give you some reference). Broil for 2-3 minutes and flip them with tongs. 4. After they cook for another 2-3 minutes on the other side, brush the wings withe honey sriracha sauce and pop back into the broiler. Again, be VERY careful and keep an eye on them so they don’t burn. Flip again and repeat brushing process on this side. 5. Remove from oven and glaze these sexy wings with one more coat of honey sriracha. They will shine and smell like HEAVEN. Sprinkle with chopped scallions. 6. Make cheese-waffle blanket! Put a heaping mound of shredded cheddar into a cast iron or non-stick skillet, and place the waffle on top and press down a bit. Cook until cheese melts and starts to crisp on the edges a bit. That’s it. There was no real science to this on my end. Fun fact: I dipped some wings in a buttermilk Ranch dressing (as opposed to blue cheese), and it was delicious. I recommend that too, but they’re certainly awesome on their own.